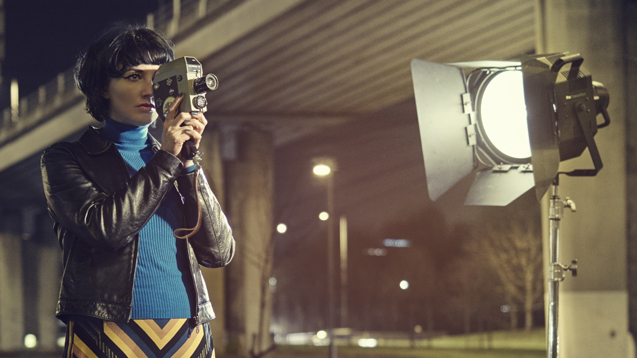 Kate Jackson on life in the Long Blondes, as a solo artist, her new album and writing songs with your idols…

It’s been some years since Kate Jackson and her band of Sheffield cohorts, the Long Blondes, were a going musical concern.

The group disbanded back in the late noughties after making a well-dressed splash, signing with Rough Trade, releasing albums and soundtracking the UK’s more discerning indie discos. It was in these sticky-floored environments where their members met and bonded, artfully forging their own musical futures using their heroes Suede and Bowie as inspirations.

Fast forward to 2016 and Kate is now striking out alone armed with debut LP, British Road Movies. Written alongside guitar/production genius Bernard Butler, the 10 songs paint scenes and tell stories in homage to the UK and its grey, green landscapes. With the new record due in May, a forthcoming tour with her group The Wrong Moves and accompanying exhibition of her paintings, Kate’s 2016 is shaping up to be a busy one. We caught up with her to discover more on the record, life after the Long Blondes and songwriting with Bernard…

When I was kid, instead of getting toys, I always wanted my mum to take me to Andy’s Records. Every week I’d want a seven inch single. I was really obsessed with the format - everything about it from the artwork to the size, as it’s quite childlike.

It really got me into the idea of collecting records at a very young age. The first album that really changed how I thought about music was Suede’s debut. Prior to that it was all about grunge. Everyone liked Nirvana. I did too but it didn’t touch my soul in the way it did with other people. I was waiting for something that sounded a bit more English, more relevant to my surroundings and everyday life. Suede did that for me and were my first true musical love. They led to PJ Harvey, Pulp, the Pet Shop Boys…

At what point did you want to start writing your own music?

Not until university. I come from Bury St Edmunds and, as a teenager, there weren’t really any bands playing. During the Britpop years there was only a small indie night. So I wanted to be an indie DJ and my first foray into music was playing records.

It wasn’t until I went to Sheffield that music became more readily available. I made friends with Dorian and Emma from the Long Blondes, we’d go watch bands and just think ‘this is shit - we can do much better than this’. That’s why we started the Long Blondes. We had a mutual distaste for blokey indie bands in leather jackets. Every single band were five lads who wanted to be the Ramones. But they weren’t.

What did you learn from being in the Long Blondes?

I wasn’t a music maker until I was in the Long Blondes. None of us had made music before. We just wanted to be in a band because we thought we could do it better and more stylishly than anybody else. We had all the ideas in place before the music but I think people could tell and liked us for it. Everybody else sat at home practicing riffs. But Dorian hadn’t done that. He just had an idea. Dorian picked us all out because of the way we looked and the music we liked.

We got into a practice room and it was shambolic. It was a steep learning curve. But of course it also turned out that Dorian had practiced and worked out how he wanted us to sound. He was very much a conductor figure.

How has the past fed into your new music?

I went from writing in that unit - which meant Dorian might give me some lyrics or a top line to write - into a writing room with Bernard Butler. It was a pretty daunting experience! He asked me to bring a song in. I’m not a guitar player or pianist. So I wrote some basic chords, lyrics and melody, recorded it on a laptop and took it to Bernard. It was a bit embarrassing but he liked it. We added a few things to it, made some changes and that became Lie to Me. It's on the LP!

How was it working with an idol like Bernard?

He’s lovely and intensely reassuring. We had a lot of similar musical reference points - Bowie, Eno, Neil Young. He’d be great at lulling me into a false sense of security talking about music and records, then start playing something amazing on the guitar or piano. It was all very natural and nice to have that environment to write in.

Was there an aim to make a record?


Not to begin with. I thought I might write with a few people and make a record for Rough Trade but it turned out that it just clicked with Bernard. I just wanted to carry on with him. It’s difficult to find a songwriting chemistry and I didn’t want to lose that.

Where did the ideas and inspiration for British Road Movies come from?


I spent a long time with the Long Blondes on the road, plus I love taking photos of supposedly mundane things. I’ve got endless photos of motorway flyovers and brutalist buildings in certain cities. Obviously living in Sheffield there was a lot concrete there. So I had all these images and photos as references rather than lyrics. It all fed into the same place. A lot of the songs reference journeying, the British landscape and a search for home. Not all the songs are about me, many of them are characters and exaggerated figures.

Afterwards, I was thinking about an album title, there were recurring themes and British Road Movies stood out. Can you think of many British road movies? It’s not like the US - we don’t have a Route 66 - we have the M1.

So there’s an exhibition to go with it as well?

Yes I’ve done a series of paintings over the last eight or nine months, mainly for the album artwork but did that, then carried on and it’s developed into a series called British Road Movies. I’m hoping to move the exhibition around over the course of the year. We’re doing a few live dates as well. We’ve all got jobs so it’s a bit more tricky financially to go on tour. We’re trying to work this out at the moment. Musically I’ve still got quite a back log of songs I’d like to record, some with Bernard, some with other people too.

Have you any tips for music makers?

Learn as much as you can about the industry - and try and do everything yourself to begin with. You can do it yourself. Don’t rely on other people. It might feel like you can’t but you definitely can…

Listen to The End Of Reason below. You can also catch Kate on tour.