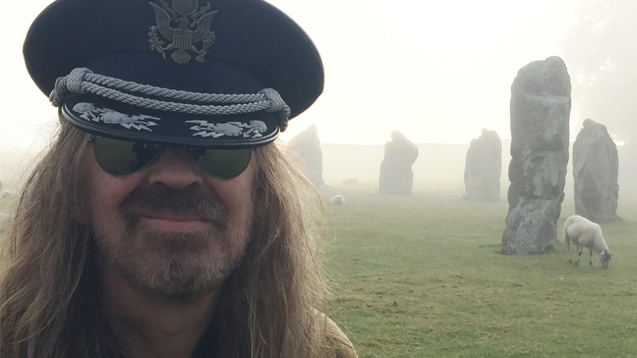 Rock star, historian, legendary acid freak, visionary and now born again drinker Julian Cope is like no one else in the pantheon of pop - we meet one of music’s true eccentrics and his new album, Drunken Songs…

Has the vortex of pop music ever thrown anyone else up as weird or as wonderful as Julian Cope?

Almost certainly not. As leader of legendary Liverpool outfit, the Teardrop Explodes in the eighties, acclaimed solo artist and writer of numerous tomes ranging from history to Japanese krautrock, Julian occupies a unique position in leftfield UK culture. He’s as much a pop star as he is an antiquarian, a claim very few can rival.

Throw in his almost legendary previous predilection for LSD, plus latest venture into novel writing (check out the so-called ‘time-shifting gnostic hooligan road novel’, 131,) and continued dedication to a solo career that is defined by eccentricity, and you have a real original.

His latest new record, Drunken Songs, is a love letter to night-time adventures, a collection of inebriated ditties penned around the British Isles throughout the past decade while Julian was researching his favourite ancient monuments. Excitingly, the release will be accompanied by a tour across the whole of February with a special live show in the round at London's Roundhouse. And those who’ve seen him live will know how extraordinary Julian is as a performer. Not only that but we were lucky enough to be able to call Julian up in his Wiltshire bunker and spend some time chewing the cosmic fat...

How did you first become embroiled with music?

Tom Lehrer - my parents thought they were very anti-establishment and in Tom Lehrer they found someone who was very much anti-establishment, so much so that my parents realised that they didn’t like him because he was too anti-establishment. By that time, they’d taught me all his songs. So really, I’ve always seen things through this lens. I found out that Jim Morrison and Frank Zappa were both into him. They’ve both got slightly perverse views of the world and I think it’s added to my enduring secular vision.

How did you start writing your own music?

It was always on the cards because the music I liked early on was very hand rendered. The thing is that Krautrock was clearly from endeavours achieved from very specific visions. There were a lot of people doing similar things around England on the edges of the music business. That was always what motivated me and moved me.

Your intake of LSD was legendary - how has it shaped the kind of artist you are?

Has it made you a better one?

Yes probably. I think so. There were neurological problems in the Welsh side of my family due to inbreeding. That sounds like I’m pulling your leg but it’s actually entirely true. I’ve been aware of a little bit of madness in older members of the male side of the family over the years but it hasn’t impacted me, because I’ve grown up in a world which is extremely relentless in its expectations. I’ve had to endure in order to still be interesting. And for people to still be interested.

How have you sustained your 'career' as a rock'n'roller?

You've got to make sure you don't make a rod for your own back. I remember right at the beginning of my career when we first signed a deal I was in a limousine with the singer from Def Leppard, Joe Elliot. He was a really nice guy but it was early, like 8.30am – what were we doing even up? I got in with a big spliff and I passed it to him. He said ‘I can’t do that, I’ve got a photo session’. I told him I had a photo session as well - we’re going to the same magazine but he was metal and I was alternative. I took my shades off. He said 'your eyes are all red which is why my manager won’t let me smoke pot before a photo session'. I told him to smoke it and just wear shades, then you won’t have that problem. Make a fuss about it early on. Because if you don’t, then you make a rod for your own back. You want to be stoned because half the time photo sessions are horrible. If you make your eyes like piss holes in the snow, they have no choice but to put shades on you.

Was that during the time when you were wearing your infamous leather trousers?

Yeah man I had to have several pairs of the infamous leather trousers - because, you know young men, hygiene - there was a lot of friction due to the sun and the stage lights.

Drunken Songs is your new record - what’s it all about?

Then I found myself doing some prehistoric research in Armenia. I got to the border and this prehistoric settlement in a cave. While I was there, they had this big celebration in the village. As I was guest of honour they expected me to drink. I did tell them I didn’t, I was teetotal. One chap was like ‘you wanna be a hero man? You’ll get fucking lynched if you don’t’. So I had nine mulberry vodkas that night and afterwards I was like a boy racer. Bring it on.

From there, I just started bringing together tales from various experiences from the UK and weaved them into ridiculous songs.

So what’s next for you - you’re going out on tour?

What happens after death? I read online you were believe you were followed by death?

Yeah man I was followed for five days. Where we live I’ve seen some weird manifestations but I think I would, because I’ve invited it by visiting all the most peculiar places I could find in the world. If anyone is going to see it, it’s gonna be me. I live in a land of crop circles and this crop circle café sets up every summer, I’d say 80 metres from our house. Once you clear all the charlatans, the deluded, the absurdists and the semi-psychic people who think hair in their eyes is a spaceship – but once you’ve cleared all that shit away, I still had wild experiences.

What should audiences on the tour expect from your wardrobe? Are you still rocking the ‘pagan biker’ look?

Really, it’s God’s biker. Or Odin’s biker. It’s a good time of life to become Odin’s biker. It offers such a great two dimensional image that I’ll be able to hoodwink people for another ten years that I’m still a rigorous male. But ultimately I’ll be cadaverous. But no one will know.

Look out for a full length profile feature on Julian in our next print issue of M magazine.

Find out more at Julian’s website - headheritage.co.uk and get tickets to a special gig in the round at London's Roundhouse.