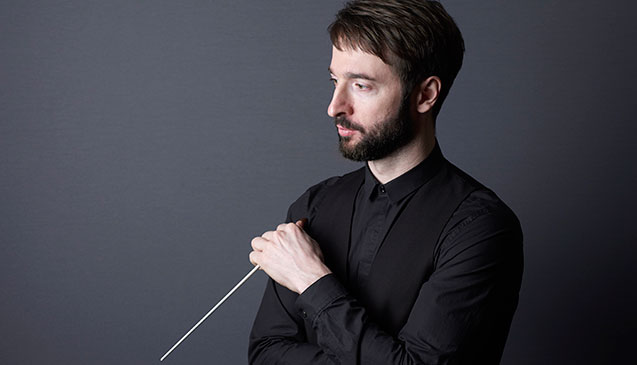 'I like to be the underdog': Berlin-based musical polymath Jules Buckley on his leftfield New York-inspired Prom and why he's happy to be an outsider...

Over the seasons, his sonic alchemy has changed the game both in the concert hall and outside, spilling over to shake up the boundaries between classical, contemporary and electronic music.

His list of collaborators makes for astonishing reading, with Quincy Jones, Gregory Porter, Massive Attack, Arctic Monkeys and Stormzy all in their number.

It adds up to credits on 70 albums, from Michael Kiwanuka to Professor Green, Anna Calvi to Tori Amos.

Jules is also one of the masterminds behind Ibiza Classics with Pete Tong, the stadium smashing live classical take on dance anthems. Together with Chris Wheeler's Heritage Orchestra (which Jules co-founded), they tear through some of rave music’s biggest anthems including Chime by Orbital, Children by Robert Miles and Inner City’s Good Life.

As his New York: Sound Of A City bandwagon pulls into town for The Proms, we chat to the mercurial musical talent to learn more about his latest collaboration with Chris Wheeler, and what it’s been like to orchestrate Hercules and Love Affair, Sharon von Etten, Serpentwithfeet and MC Nitty Scott for the concert…

How it is in Berlin at the minute?

You’re going to be in London for your Late Prom tomorrow -  how did the project come about?

Chris Wheeler and me set up the Heritage Orchestra together, and there was a potential slot to do a concert this summer, if the idea was good enough. So, I went to Chris and was, like, ‘Dude, we’ve got a potential, we could do something really fresh, you know?’

Then, we knocked heads about it and Chris came up with this initial idea of doing a glitchy, dirty, electronic disco sort of project based around the electro-disco scene in New York. I really liked the idea and I chatted to the BBC guys who were really into it.

So, over a period of a couple of months we refined our concept. Instead of trying to sum up the sound of this city in 75 minutes, let’s find a select handful of current great artists to present a snapshot of New York vibes.

You’ve got some interesting names involved this time – what’s that been like?

If you look at Serpentwithfeet as an artist, he’s phenomenal; someone who’s really found his own sound and his production is very, very impressive. And vocally, he’s really very special.

Then, Sharon Van Etten really comes from a different place, I would say. There’s the singer-songwriter element, there’s the indie element. Everything fell into place when we were listening to some Hercules stuff and then we heard Omnion, which she sang on, and Sharon was already on our list at that point… So, we started to cross-pollinate the concept.

Hercules is more established than those two artists and, in some way, he’s the linchpin of the concert. The Prom has an electro, disco vibe which was steeped in the clubs and catacombs of New York at a certain point in time that we had to pay some attention to.

And then you can’t focus on New York music without including an MC. So Nitty Scott, was perfect. She’s fucking ace. As long as we can pull the music together, I’m hoping that the audience will really get a broad imagining into these four artists’ worlds and, through that, like, an imagining of what the hell is going on in New York at the moment.

To be honest, it’s been really cool because, even though they’re from four very different places, the working language is essentially the same. So, in the build-up to this gig when we’re looking at different tracks we want to do and how we want to pull them together, everything from going to the producer to get stems of the original recordings, talking about backline, essentially, the language for all of them is the same.

Of course, conceptually, they come from four very different corners. Each artist, in my collaborative experience, is different. Some are very passive, they’re like, ‘Hey, surprise me, I’m really looking forward to it,’ and others want to really check out what they’re going to hear and what they’re going to do beforehand. So, over the years, I’ve developed an understanding of that and a preparation of each scenario and how to best make them feel as comfortable as possible as quickly as possible.

This isn’t your first rodeo in terms of The Proms, is it?

Someone keeps bandying around a number, but I don’t want to think about that because I don’t want this to be, ‘Oh, it’s another Jules gig,’ you know? I like to be the underdog.

Wouldn’t you say you’re pretty establishment now in terms of your Proms programming?

Shit, no! Okay, well, then it’s going on record; this will be my last Prom! Hahahahaha!

How have The Proms changed since you first got involved?

I always remember when, seven or eight years ago, I was round a board table discussing a concert and we got into a gently differing of opinion over what the orchestra would wear. The dude I was chatting to, who wasn’t in the BBC but related to one of the ensembles, was absolutely flabbergasted that we wouldn’t wear tails. In a way, that said a lot then - and it has really changed now.

If I think about the actual BBC Proms team, they’re super open-minded, really driven to present cool shit and really up for it. Like many other great festivals, classical or otherwise, they’ve got to be constantly evolving, haven’t they? They don’t want to rest on their laurels, I suppose.

What’s next for you after the Prom?

I’ll take a little bit of a break and then I have a position with Metropole Orkest, which is this orchestra from Holland I have a love affair with. We’re going to be in Amsterdam for a couple of gigs and then we’ll go to the music festival in Bremen with Bokante.

After that, we’re going to be gearing up for the next Pete Tong Juggernaut tour, which will be coming to arenas near you around November into December.

At the same time, I’m also planning on taking a little bit of time out this next season to really get my own album up and running. That’s, for me personally, my main focus for the next 12 months.