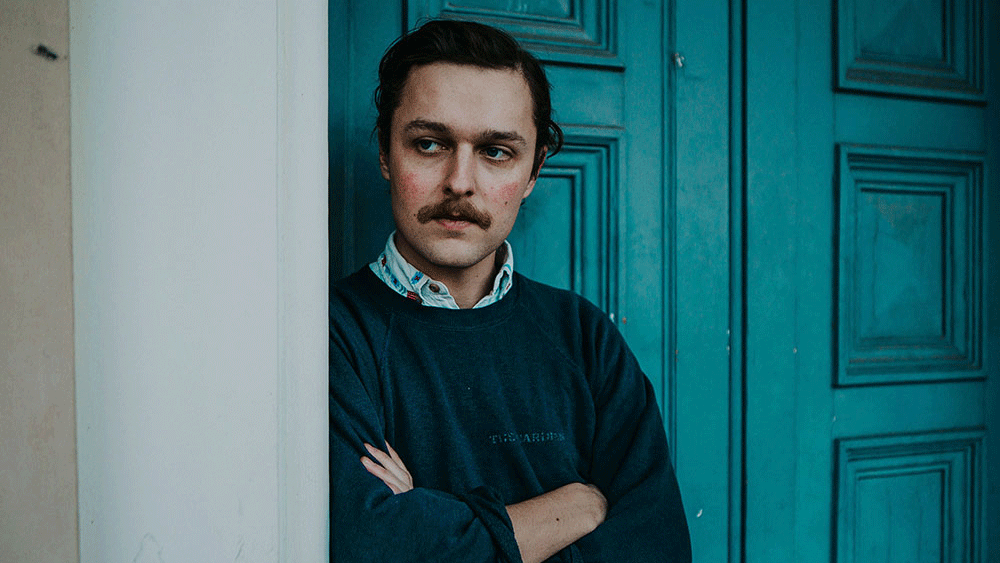 'Procrastination is the mother of invention': Northern Irish Music Prize winner Joshua Burnside on how he crafts his songs, why production matters and how to tackle that tricky second album...

Along the way, he’s bagged the Northern Irish Music Prize for his debut LP Ephrata and won slots at showcase festivals including SXSW, Output and The Great Escape.

On record, his mix of found sound, synths, submerged beats and layered vocals hint to an eccentric sonic palette, while his live shows duck and dive between acoustic and electric at lightning speed.

With a new album currently in the works, and upcoming slots at festivals around the country this summer, we check in with the Belfast troubadour to unpick his eclectic sound…

How would you describe your sound?

I jump between acoustic guitar and electric guitar live, and in the recordings there’s a lot of electric guitars, beats and synthy stuff going on. There’s a bit of everything in there. I think it’s a good sign if it’s hard to explain what it is!

Do your songs start life on the acoustic guitar then?

It depends. I write on acoustic guitar or piano. But sometimes the words come first, or sometimes it might be the beat. I like to write some different angles and sometimes you just have a rhythm in your head and then the chords, words and melody starts coming. That can be a good way to come at it.

Do you write mostly at home or do you need to be in a studio to get creative?

It doesn’t really matter where. I have a studio in Belfast that sometimes I write in, or sometimes I write at home or when I’m on the road. I probably write most of my lyrics at home. But the funny thing is, the more you try to write songs the harder it is. Most of my ideas come when I’m procrastinating, like when I should be doing my taxes or I’ve got stuff to do… Procrastination is the mother of invention (laughs).

Your music is full of contrasts – what drives the direction of your songs?

When I start writing a song I normally have a pretty good idea of where it’s going to go. By the time the song gets recorded it might not end up like that but I certainly have an idea of the sound I’m going for and the kinds of artists and records I would like it to be a bit like… of course it’s not going to come out sounding like them, it comes out sounding like me! But I think it’s good to have that direction when writing and producing. I like to produce as I’m writing, so they’ll be half-finished ideas and chords which I’ll finish in the studio. The production side of things ties in with the writing of the tunes.

How do you then translate those songs back to the live environment, once they’ve been through the studio process?

It’s a fun challenge! Obviously there are lots of things on the record that aren’t in the live set – like hundreds of vocals doing allsorts of mad stuff through vocoders and pitch shifters…

If I wanted to recreate the songs exactly the way they are on record I could probably do it, but where would be the fun in that? I think people appreciate hearing the songs in a different way. So with this new band, with the electric guitar and cello, it’s been fun to take parts we didn’t use before and transfer them to those players. They’ve picked those parts out and made them their own, which breathes new life into the songs I’ve been playing for two years straight. It makes it more fun for everyone involved.

You’re going back to producing your new record yourself. Why?

I’m a bit of a control freak and I enjoy the production of music as much as the music itself sometimes. It’s hard when you’ve written songs to give them over to someone. The production side is so important and can change a song so drastically. I know I can produce things to standard I really like, in a way that I like.

On my last album, I ended up back seat producing and just telling them what to do and there’s no point in doing that – I might as well do it myself! I know the sound that I want and which way I want to go with tunes. I enjoy it as well. I enjoy locking myself in the studio, tweaking things and moving things around and cutting things up. I like to get experimental with the sounds. When you have limited time in an expensive studio, there’s a lot more pressure just to get the songs done.

Is the new album ready to go?

Yes, it’s all written and I’m producing it at the minute. There are a few tracks which I wrote with the current band in mind, which I don’t normally do. So I wrote some bits and we came together and they added things – which is more collaborative than how I normally work. The rest of it I’m just doing myself in my own studio.

Do you feel any pressure with this album to follow up on the success of your debut?

I put a lot of pressure on myself anyway when it comes to songwriting, so I don’t think any more than the first one. I try not to think about it and zone out from the outside world and get trapped in my creative bubble. You can get all twisted up in your head and be going around in circles without getting stuff done. Then the stuff you do get done you don’t like because you’re trying to impress people or please them.

When I write a song, I try to write it for one particular person in mind. I think, ‘Would my dad like this song? Or, would my brother like it? Or my friend’. If you try to write a song that pleased all three of those people, you know it’s going to sound crap! I just won’t work. If you have one person in mind it will make much more sense. The more people you try to please, the more muddled the song becomes.

How do you feel about collaborating on the songwriting process?

I’ve done bits and pieces, and it’s something I would consider doing more in the future. With my own music, I’m pretty precious, so I’d find it difficult to cowrite a song under my name. But, with other stuff, when I find the time, I’d be up for it!

You signed with BDi last year – do you have any insight into signing with a publisher at that stage of your career?

Rhiannon from BDi signed me – it was her first signing for the company. It all came about pretty naturally. They were in Belfast for Output Festival and saw me play. She’d already heard me and really liked it.

It’s amazing to have them on the team because they’re so supportive and helpful with everything – not just the publishing side of things, but promotion, contacts in London, so much. When you’re an independent musician – I’m with a small label in Belfast – you have to slowly build up a team of people around you. For some artists it all happens at once and for others it’s one step at a time.

I’m just getting into the latest Big Thief record, which I’m enjoying. Before that, Julia Jacklin; she has an incredible voice.

When will the new LP be ready?

We’re hoping to bring it out next Spring, with a few singles out before then.

Joshua Burnside has been supported via PRS Foundation’s International Showcase Fund (for SXSW 2019) and Momentum Fund. Learn more about the work of PRS Foundation.
Features