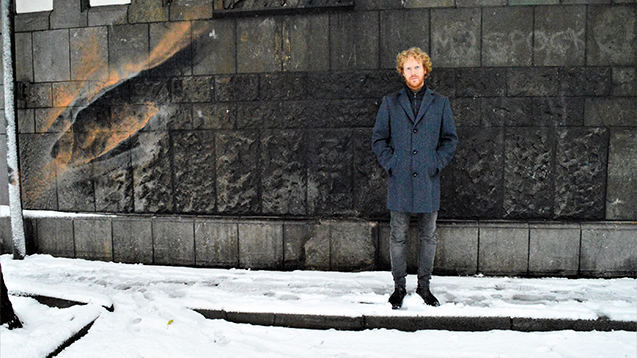 The timeless soul man is back with an eclectic covers album that joins the dots between Billie Holiday, Scott Walker and Beyoncé.

Jono McCleery has been crafting his timeless soul for a decade, bubbling under the musical surface as one of the UK's best kept secrets.

Folk legend Vashti Bunyan was among the many fans who helped fund his 2008 debut, Darkest Light, which effortlessly melded his love of jazz, folk and acoustic.

Since then, he's toured with the likes of Gil Scott Heron, Bonobo, Fink, Jose Gonzales, Little Dragon, Jamie Woon and Portico Quartet, drawing in hushed crowds in rapture of his haunting vocals and understated guitar work.

With comparisons ranging from Miles Davis to Radiohead, it's no surprise that McCleery's latest project is equally eclectic. New album Seeds of a Dandelion finds him covering a collection of songs in his own inimitable way – taking in cuts from Billie Holiday and Scott Walker through to Beyoncé.

'This is something I've always wanted to try, but it was important that I felt a really strong connection with the songs', he says.

'I also looked back on all the covers I have played live in the past and found some to be ideal for this project, and I had been playing them for such a long time that they felt like my own already.'

On Ingenue (by supergroup, Atoms For Peace), Jono's vocals contain echoes of Perfume Genius and Out Cold, building to a falssetto that will melt you away – all the while sounding beautifully raw.

'As usual with studio recording, it was the spontaneous moments which stood out,' he says. 'Many of the vocal takes are taken from rough versions, performed live with the instruments.'

Seeds of a Dandelion is set for release on 26 January via Ninja Tune’s Counter Records imprint, with the LP and CD following on 2 March.

Here, we caught up with Jono to find out what's making him tick...

What was the first song you developed an obsession for?
Try a Little Tenderness by Otis Redding.

What’s the first gig you went to?
My brother's band, Shine, in Southampton.

What’s the first instrument you ever got hold of?
My dad's piano.

What is your worst musical habit?
Waiting until the last minute before practicing for a show.

What’s the best piece of musical advice you’ve ever been given?
Write a song about that.

Where do you discover new music?
Food shopping in the supermarket.

What’s your favourite venue?
One where people are quiet and listen.

Who is your current favourite band/artist?
Bertel Haugen.

What inspirations outside of music impact your songwriting?
The circle of life, the wheel of fortune.

What track of yours best represents your sound?
Tomorrow, album version.

What’s next for you?
Releasing my new album Seeds of a Dandelion on 26 January and a European tour to follow…
Features