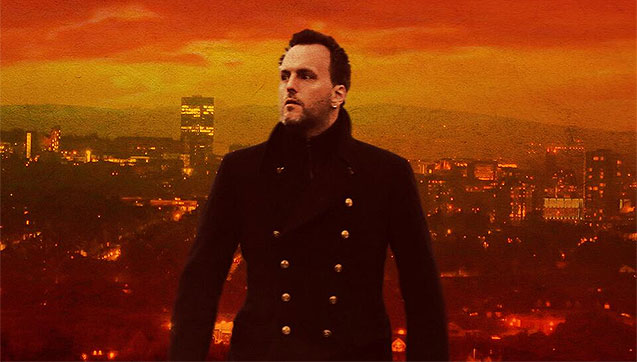 Jon Boden on the making of his new concept album Afterglow, the passing of his band Bellowhead and why folk could be in danger of becoming gentrified…

‘The future of folk is hanging in the balance, and is in danger of turning into just another branch of the performing arts… passively consumed by the audience rather than being a participatory social art form,’ warns Jon Boden, ex-frontman, composer and arranger with Bellowhead.

As a leading light in the British folk scene, over the years he’s added to our nation's canon while also exhuming forgotten works for contemporary audiences.

It’s an endeavour that has seen him pick up many plaudits along the way, not least from the BBC Radio 2 Folk Awards, which has bestowed him with 12 statues for his efforts.

Since Bellowhead's official split last year, Jon’s been working on the follow-up to his 2009 solo album Songs From the Floodplain,  with the stunning results landing on 6 October.

Called Afterglow, it's a concept album - and part of a trilogy inspired by post-apocalyptic literature and a post-oil future.

We recently caught up with him to learn more about its making, the passing of Bellowhead and why folk could be in danger of becoming gentrified…

What’s the thinking behind your new album Afterglow?

I got interested back in 2008 in approaching albums more like a novelist would approach a book, and particularly interested in writing about a ‘speculative’ post-peak-oil future. This led to Songs From the Floodplain in 2009 and Afterglow is a follow up to that. Although it has a post-apocalyptic setting it is really just a love story, which takes place during a bonfire-night street party in a deserted city.

What were your biggest inspirations?

Literary inspirations were many and various! After London by Richard Jefferies is a touchstone, as are some of the post-apocalyptic novels of John Christopher. Margaret Atwood’s Madd Addam trilogy chimes closely with the world I am writing about, largely because it is not all doom and gloom, but more interested in how the human spirit might progress after a collapse in the established paradigm.

I am less interested in books like The Road, which is brilliant but just too depressing to cope with. Musically the touchstone for this album has been Arcade Fire – I think probably the greatest band to have come about in the last 30 years - but I was also keen to bring in some Bollywood textures, and enough acoustic textures to tie it back to the sound world of Songs From the Floodplain.

How and when did it all come together?

I knew I wanted to keep writing in this area as soon as I had completed Songs From the Floodplain, but it took me until 2015 before I came up with a concept/structure for the album that I felt really fired up about. I then let it bubble away in the background for a year (during which time we were saying farewell to Bellowhead with two final tours).

As soon as Bellowhead played their final gig in May 2016 I sat down and started writing Afterglow. The songs took about six weeks to write, but it took a lot longer to write the strings and brass arrangements, and then get it all recorded.

How does it relate to what you were doing on Songs from the Floodplain?

I think it’s set in the same place geographically and under similar conditions. I’m not sure whether the Afterglow story takes place before or after Songs From the Floodplain. There is one song on Floodplain called Going Down to the Wasteland, which feels like it leads into Afterglow, so maybe the two albums occupy the same time frame. I think a lot of this is up to the listener to decide – that’s one of the beauties of the album as an art form – you can leave a lot more space for the listeners’ imagination than you can with a novel or a film. My plan is for Floodplain and Afterglow to be the first and second parts of a trilogy.

You’ve been making music for a while now – how has going solo impacted the music you write?

Well, I’m spending more time playing the guitar! Mostly I write songs in my head without an instrument but there are several on Afterglow that are riff-based and therefore started life on the guitar.

What led to your decision to leave Bellowhead?

I felt I had achieved everything I wanted to as a composer/arranger within the framework that Bellowhead had always set itself - traditional songs arranged for that combination of instruments. And, whilst it might well have been possible for Bellowhead to reinvent itself, my feeling was that it was better to draw a line under it and start an entirely clean page.

I had thought the band would carry on without me but in the end I think they took the same view as me and decided it was time for pastures new. We’re all incredibly proud of what we achieved and I look back on my time with Bellowhead with a profound sense of gratitude for having been a part of it all.

What was it like to curate the Cambridge Folk Festival this summer? What did you take away from the experience?

It was great to be a bit involved in the behind-the-scenes side of festivals, although to be fair my role was largely to come up with suggestions and ideas rather than do any actual work! That said I did work very hard during the actual festival, but it was great fun playing with and introducing my curated acts, and being able to spend a whole weekend at a single festival is something I haven’t done for a decade or so!

You reprised The Remnant Kings for the event – will you be performing together going forward?

Yes, the November launch tour is half solo and half band. The solo leg is great because I can mix in lots of stuff from the last 15 years. I’m particularly enjoying playing some Bellowhead tracks in a stripped down format. The band leg will be with the full 10 piece, which is very exciting! We’ll be playing all the tracks from Afterglow plus lots of other cool stuff.

Alongside your own material, you also perform traditional folk songs – what draws you to this repertoire?

I think I just like songs and albums which create a world that you can lose yourself in. Folk songs do that individually, but also as a body of material it is endlessly absorbing and transporting.

Why are those songs relevant today, do you think?

I don’t think they’re necessarily all relevant in a direct political sense, but obviously the human emotional truths don’t tend to change that much. I tend to think of it like Shakespeare or the great Victorian novels – the human emotions and truths they contain are just as potent as in any contemporary novel, but I find it much more engaging to experience those universal elements in an unfamiliar context. Contemporary realism is not something I can get very excited about.

How do they influence your own writing style?

I think there is an economy of style in lyrics that have come through the oral tradition – things tend to get whittled down into as simple a form as possible. It’s not something I always stick to in my own writing but it is certainly an aspiration.

How do you see folk music evolving in the future?

I think that is probably hanging in the balance at the moment. It is in danger of turning into just another branch of the performing arts – something to be perfected by the elite and passively consumed by the audience, rather than the genuinely participatory, social art form it started off as and was maintained as by the folk club/folk session movement. The social element of the folk scene is still strong but it is very reliant on the original sixties generation of folkies. If it’s to survive as a social art form we need to bring more people into it on a grassroots participatory level and try and break the growing assumption that music is only something that ‘musicians’ can do.