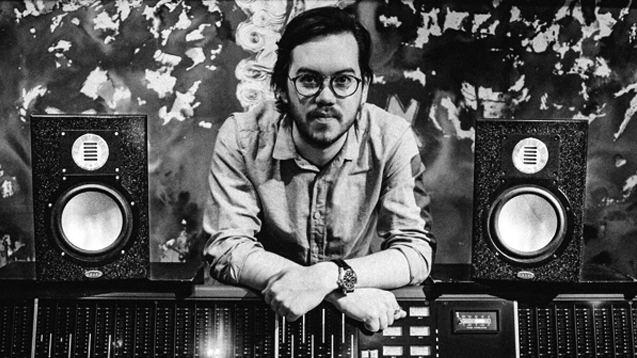 Slaves are one of 2015’s surprise success stories, an English punk duo who have picked up a devoted following through their anarchic live performances and Mercury Prize nominated debut LP, Are you Satisfied?

Jolyon Thomas was the record producer behind the desk and helped beef up the band’s sound without losing any of the energy and chaos they’re loved for.

He’s worked for variety of leftfield artists including the likes of Daughter, British Sea Power and while also finding time to direct music videos.

How did you start off in the music industry?

I have been a musician all my life. Starting out as a drummer in bands then migrating to guitar to write songs. Eventually the studio became the instrument and I guess my start in the industry was when I was able to have my own small studio. This enabled me to record and collaborate with other bands and artists.

I don’t know if I’ve had my big break! Currently I’m very proud of the Slaves album going top 10, and of course the Mercury nomination.

How can new bands best prepare themselves before heading into the studio?

Everyone is different, all artists need to interpret what they’re doing in their own unique way. The studio (hopefully) should be a place for this to happen. My advice would be to be prepared for anything, there really are no rules. If you go into the situation thinking you know how everything is going to turn out then you'll probably not get the best out of the experience. Be experimental.

Most importantly of all try and go into the situation with an engineer or producer who you resonate with. You could go to the best recording facility in the world, but if you’re not working with the right people it’s probably not going to work out.

What is the role of the producer in 2015? How has it changed?

I don’t know if the role has changed all that much. However, I do think the understanding of the role is ever changing.

It is easy to assume that the engineer is the producer and vice versa ... that’s not to say that one role is more important than the other but more to say that it’s sometimes hard to quantify the role if there are lots of people in the room pushing buttons. Producing isn’t necessarily about pushing any buttons.

In my mind my role is pretty simple. To make the best record for that artist at that moment in time. I help guide the session from pre-production/rehearsals right through to recording/mixing/mastering. I am trying to give that artist the freedom to express themselves without having to worry about anything else; such as budgets/time-line/record labels and so on.

This is an entirely different role to an hip hop or dance music ‘producer’ for example who might make beats.

Creative differences in the studio - what’s the best way to resolve them? Or is this something you don’t really encounter?

Naturally my position is to diffuse these sort of things. I am there ultimately to bring objectivity. Of course people have creative differences but maybe that’s a good thing? At the end of the day you’ve just got to get on with it.

This is one reason why I don’t envy the bands who choose to “produce themselves” I can imagine it’s just really slow!

Normally I’d take the route to try all the options and go with what feels best. You normally know what’s working once you hear it.

You’ve worked with an array of artists including Slaves, Daughter, British Sea Power and M83 - these artists have a variety of different sounds – what have you learned from working with such diverse acts?

All these artists are fantastic and all so different, I have learned things individually from all of them but no rules. If I had to make one up I’d say they are all interested in serving the song. Meaning that at the core they are all songwriters, the rest is just style.

How was working with Slaves? What were the biggest challenges?

It was brilliant. The whole process was very collaborative and we had a great laugh. That’s not to say that it was easy but I think we were all so appreciative to be making a record together that we really just went for it.

The biggest challenge was to re-interpret the live energy in the studio. Don’t get me wrong, we didn’t want it to sound ‘live’ but once you’ve seen them on stage you’ll know what I mean!

Simplicity is also the hardest thing to get right, but it also can be the greatest.

What are your favourite pieces of studio kit and why?

All of it! I am a nerd and studio’s are a really nerdy subject, however, I am a fan of things that are fun to use. I think if you can look at a piece of equipment and play around with it then your likely to stumble across something exciting. I like using guitar pedals and analog synths for this reason as they are for the most part pretty simple and you can mess with them. They also offer a certain amount of randomness which I feel is important.

Read our other Mercury Music Prize-related content including profiles with C Duncan and Benjamin Clementine.