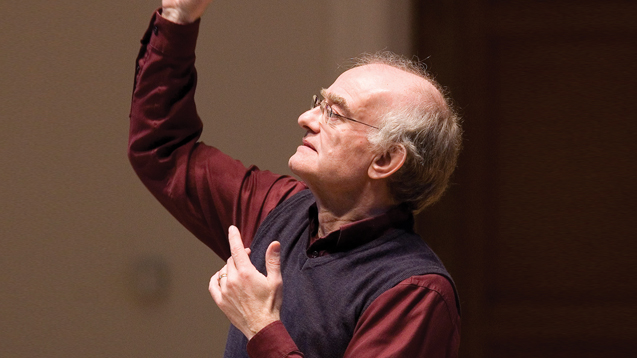 Classical composer John Rutter is a choral tour de force, famed for his eclectic influences spanning both classical and popular traditions. He’s perhaps most widely known for his carols and church music, and hosts the Royal Philharmonic Orchestra's Christmas Celebration concerts at the Royal Albert Hall each year.

John first studied music at Highgate School, where he wrote Shepherd’s Pipe Carol, a piece that went on to sell over a million sheet music copies. In 1967 he graduated from Cambridge University, becoming director of music at Clare College in 1975.

He formed the Cambridge Singers as a professional mixed chamber choir in 1981 after quitting the Clare post to concentrate full-time on composition and conducting. In 2007, John won the Ivor Novello Award for Classical Music and received a CBE in the Queen's Honours List for his services to music

How did you first get into composing?

I started doodling at my parents’ piano making up little pieces when I was about five or six years old. In a way I’m still doing the same thing all these years later but I get paid for it.

Who or what has influenced you most throughout your career?

I was fortunate to have a director of music at school who thought composition was normal. He had been a pupil of Charles Wood (church musicians will know that name) and he encouraged many of us at school to write. My chum John Tavener was probably one of his greatest successes, but there were others including David Cullen, who went on to orchestrate for Andrew Lloyd Webber. Then at Cambridge University I was lucky to be spotted by Sir David Willcocks, the legendary director of King’s College Choir. Thanks to him, I was signed up by Oxford University Press, the publisher I have been with ever since.

Your musical style is eclectic, drawing on both English and international influences: what attracts you to the choral traditions of other nations?

We can all learn from each other. I listen to all sorts of music - not just choral - and I pick up sounds and ideas from many parts of the world. The wonderful thing about choirs around the world is that they don’t all sound alike because singing is related to speech and, for example, Russian choirs don’t sound like Swedish or Cuban or South African choirs. Long live the differences.

You’ve created large and small choral works, orchestral and instrumental pieces, piano concertos, children’s operas and music for television – where do you feel most at home?

It’s not always a good idea to feel too much at home anywhere because you may start repeating yourself. This year I got a huge buzz out of writing a violin concerto, Visions, simply because I had never written one before and it was an adventure.

How has your work with the Cambridge Singers influenced your writing over the years?

When I first put that choir together, in the early eighties, professional mixed chamber choirs were a rarity and I felt I had stumbled on a sound which was new - combining freshness and accuracy with purity and passion. The sound of the Cambridge Singers from those years remains with me whenever I write for choir.

How do your works normally start life?

With an email or a phone call from someone in the outside world who wants me to write something and can offer an opportunity, a specific performer or group, a nice occasion for a premiere, or just a good idea.

Where do you prefer to write?

You’ve created scores of Christmas carols – what is it about that time of year which inspires you?

The absence of politicians on the airwaves for a few precious days. We glimpse the world as it might be if only people would stop being nasty to each other. The Christmas story in the bible is an enduring inspiration and symbol.

Do you consider yourself religious?

Profoundly religious when I’m setting a sacred text. You have to enter into it.

Can you tell us more about your annual Christmas Celebration concert? It’s become a bit of a yuletide institution, hasn’t it?

It has the perfect ingredients - the Royal Philharmonic Orchestra every year, and this year we’ll hear the Bach Choir, the choristers from St Albans Cathedral, and two of my favourite soloists, Elin Manahan Thomas and Melanie Marshall - all in the Royal Albert Hall, with its mighty organ at full throttle. Something of The Proms spirit, but in December. And we’re repeating it all in Symphony Hall Birmingham, the finest concert hall acoustically in the land.

The erosion of copyright by piracy and by its powerful enemies flexing their muscles - all the big tech companies like Microsoft, Google, YouTube, Spotify and many others. They would love to have their music without the inconvenient obligation of paying us for it.

What advice do you have for composers starting their careers now?

They’re all much more street-smart than my generation ever was, much better at promoting their work and reaching their audiences. They don’t need my advice, I need theirs.