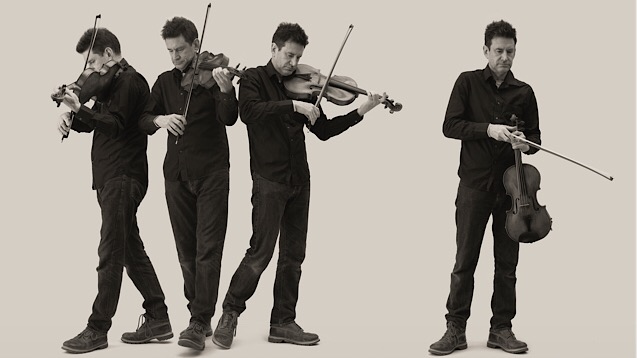 John Metcalfe is one of the UK's most sought after arrangers, regularly working with the likes of Max Richter and Coldplay. We delve into the making of his stunning new album.

'I like a sonic adventure but I’m primarily a violist. That sound-world has been my life and it’s led me through all sorts of music and been a spine through all my records,' says John Metcalfe.

A composer, multi-instrumentalist and producer, John is one of the UK's most sought after arrangers, with credits for the likes of U2, Coldplay and Peter Gabriel.

As violinist with the Duke Quartet, his string arrangements have featured on albums by artists including Morrisey and Blur, while as a member of cult post-punk band Durutti Column, he helped launch the pioneering Factory Classical on Tony Wilson's legendary Factory label.

With such a rich tapestry of sounds in his CV, it's no surprise then that in his own work as a solo-artist, John explores the boundaries between genres, diving into electro-classical soundscapes with gusto.

For his fifth record Absence, out now on Neue Meister, he recruited a line-up of musicians from the worlds of post-classical, electronica and pop, featuring the sublime vocals of folk singer Rosie Doonan.

Latest single Solitude is a beautifully moving piece that weaves cathartically through a minimal arrangement and Doonan's haunting, pitch-shifting vocal.

Mesmerised by its sound, we caught up with John to learn more...


When did you first start making music?

My sister and I used to record made-up songs onto a shiny new cassette machine; her on piano with me on drums, which were two cushions and a pair of knitting needles. From there I springboarded to improvising guitar over Kraftwerk’s Neon Lights and with a band at school writing Joy Division-type songs about the trials of being middle-class.

Definitely the knitting needles. I so wanted to be a drummer and listened to Cozy Powell’s Dance With The Devil over and over. I still play the drums from time to time but I’m no drummer – I’ve been spoiled by working with proper legends such as Ralph Salmins, Andy Gangadeen, Daisy Palmer and, most recently, Richard Spaven. Paradoxically a lot of my tunes are non-percussive. I am a string player after all, and I still love that sound-world.

Absence is centred around the theme of loss and it calls upon some very personal experiences in your life. How did you tackle these concepts creatively?

My dad died when I was pretty young so that vibe is never that far away, but I never intended to make a record about loss in particular. With most of my own music I start from a sound or idea rather than a grand design. I don’t write that quickly so things happen during the course of the process that inevitably affect the end result.

Most of the time I’m reluctant to attach a meaning to the music – I’d rather let the listener have a narrative-free listen. I’m particularly cautious about lyrics; I agree with Brian Eno when he said that lyrics can debase the mystery of what the music is doing. Paradoxically though, this record has more lyrics than any of my previous outings but I’ve tried to keep the vocabulary sound-based and hinting at the big picture rather than the ‘woke up this morning’ approach.

Were there any sounds or instruments you felt encapsulated the mood you wanted to achieve better?

The original impetus was to make this more of a band record – one that was easier to translate into a live situation because Daisy Palmer, the drummer, Ali Friend, the bassist and Rosie Doonan, the singer are amazing musicians. It's great to be in a room performing and working with them because it’s rewarding and seriously good fun. So the core sound is a pub four-piece with strings. I’ve gone into more detail with the electronic side of things compared to previous records, but in quite a subtle way that’s hopefully an enhancer rather than a distraction.

You have an eclectic discography, ranging from classical to electronic and everywhere in between, how do you decide upon a sonic direction for each release?

I like a sonic adventure but I’m primarily a violist. That sound-world has been my life and it’s led me through all sorts of music and been a spine through all my records. So I’m not suddenly going to give that up and write music for bagpipes, serpent and casiotone because I think that’s what the world has been lacking.

Can you talk us through your usual creative process – how you take a song from an idea to the finished product?

There is a mystic art to using time well, particularly if you are having to compose for other projects than your own: how to put different heads on all the time and use your energy in the best way possible. Which isn’t always possible! The nine-to-five approach really does work for me. I don’t pull all-nighters anymore and I try to be organised, make lists of things to try or develop. Sounds really dull but it does sometimes lead to properly creative moments. Despite this approach, the inevitable noodle is never far away and sometimes also yields some cool stuff.

Some musicians beautifully articulate what they are after, but some say one thing and mean something else entirely. Having said that, I only do my own style, not because I think I’m great but because I can’t do anything else.

One big lesson I have learned is to honour the lyric and vocal line. I used to write pretty ornate stuff which I thought was great – ‘check out this countermelody!’ – but most of the time that actually detracts. People want to check out the main melody, not an arranger’s noodle. But it’s a cool process. You get to add something to some incredible music by great musicians – music that is their soul, their personality. So you have to respond emotionally but at the same time maintain a kind of transparency that doesn’t cloud their intent.

Rosie Doonan features heavily on Absence, what was it like working with her and what was it about her as an artist that compelled you to work so closely on the album?

Rosie is primarily a folk singer and there is definitely that dimension to this album. She has a voice you can swim in. I first heard her playing a short warm-up set when we were touring with Peter Gabriel. I went out front with some members of the orchestra (seasoned campaigners all) to have a listen and we were all blown away. I thought the sound of her voice and the viola together could be a very good thing.

What are your aspirations for the release?

Sales in excess of 10 million, a sold out world tour, the fall of Trump and a halt to the rise of the ultra-right in Europe…

What’s next for you after the release of Absence?

Some more gigs with the band. I’m also producing a couple of albums for some folk musicians, starting work on the next album and working with a very famous band on their next record. And Christmas…

Absence is out now on Neue Meister.