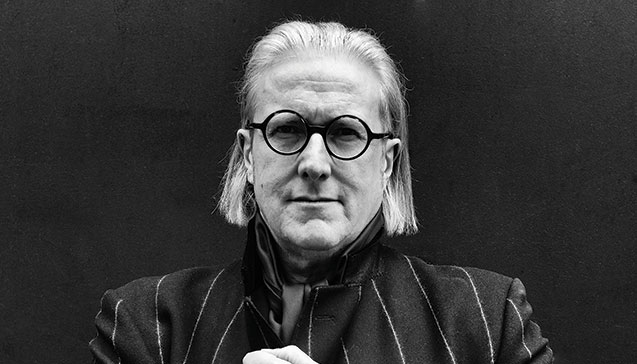 Composer and saxophonist John Harle shares his insight from life at the forefront of British musical innovation...

John Harle is an Ivor Novello Award-winning composer, saxophonist and producer based in London.

Not only is John one of the most exhilaratingly non-conformist composers around, he’s also worked with top drawer talent including Herbie Hancock, Elvis Costello and Paul McCartney, bringing their vision to stages around the world.

Here, he shares his insight from life at the forefront of British musical innovation.

I was a very intense listener as a child and teenager. I was attracted to the ‘otherness’ of music by Pink Floyd, Pentangle, King Crimson, Stockhausen, Duke Ellington, Faust, Harrison Birtwistle and others. I had a mania with electronic sound, and enjoyed lashings of prog and jazz.

How did you get into the saxophone?

It was also the ‘otherness’ of the saxophone that drew me to it, along with being inspired beyond words by Johnny Hodges of the Duke Ellington Orchestra.

Hodges made the alto sax sound vocal, but specifically it sounded like Mahalia Jackson to me. I couldn’t get over that similarity, but I also knew that I had to interpret that depth of sound for myself, not to copy it.

My father was a businessman with an early history of communist party membership, and he took me to see Ellington many times - and he taught me about the life experience of musicians like Ellington and Coltrane - their real struggle through very dark, terrible times and about the Civil Rights Movement. I had none of that - I was a privileged kid at a posh school, and I had to find another way to express the depth of my musical feeling.

I really didn’t feel like ‘toying’ with jazz, as it seemed to me to belong to other people with a right to it. I realise now that this was probably overly-cautious, but it’s what happened.

But the saxophone became my instrument - probably because didn’t actually belong anywhere, a bit like me. I liked playing around the peripheries all the musics in my list, prog, jazz, folk, classical. I played lead guitar in a proggy way during most of my teens and practiced that far more than the saxophone - I think that also helped me find my sax sound funnily enough - I just dug the epic-ness of it all.

The saxophone kind of fitted for me, and I just worked and worked at it from the ages of 19 to 22, and then started freelance work in different types of music - at the National Theatre, in countless film sessions, in the London Symphony Orchestra and so forth.

Stanley Myers came to one of my Berliner Band concerts in 1980 and he asked me to orchestrate and direct the music for Prick Up Your Ears, a biopic of Joe Orton. That was incredibly intense, I’ve never worked so hard. It introduced me to his world of film and TV, and on the soundtrack album I worked closely with Hans Zimmer and other amazing characters from that scene. I decided it was for me.

Who has influenced you most throughout your career?

I met Duke Ellington in 1974 and that was the turning point in my whole life. I’ve never met a more gracious, charismatic and kind person before or since.

Harrison Birtwistle and the late Richard Rodney Bennett have both been hugely influential and almost paternal musical figures for me through long periods of intense work with both.

Playing in Michael Nyman’s band for a long time helped me define an approach to saxophone sound that’s stayed with me. At various times, each of these four incredible musicians have helped form who I am now.

I have learned that truly great artists work harder than everyone else. Even if I’ve written the song, singers like Elvis Costello or Marc Almond work at it until it’s truly theirs. This is the highest level of authentic performance, and is always humbling and inspirational.

I worked closely with Herbie Hancock on a project I was managing for the Barbican. I turned up in my usual jeans and t-shirt, but Herbie arrived in a new bright orange suit from Ozwald Boateng. He looked me over, and was clearly unimpressed with my turnout. He smiled a sort of half-smile and said, ‘Stay sharp John!’

He wouldn’t have lunch with anybody - no time. He block-booked Craxton Studio in

Hampstead and practiced piano there every day. I’ll never forget it; possibly the greatest living harmonic brain in jazz, composing and playing scales for four hours every day.

Moondog was a true gentleman, but a hard taskmaster. I met him through [Pentangle bassist] Danny Thompson; we formed a band together and persuaded Elvis Costello to stage us when he curated the Meltdown Festival.

Then I produced the album Moondog Big Band at the old Elephant Studios in Wapping.

On the second day of recording I made the mistake of saying a lot of the music was technically quite easy. The next day he turned up with a ferociously difficult saxophone solo for me to record at no notice. It was a massive technical challenge, but eventually successful after many takes. It taught me to respect the music, not to judge it by arbitrary standards.

How do your pieces normally start life?

Very little comes to me by looking out of the window and sighing a Baudelaire-esque sigh. If I have a day at home, I compose or produce from 5am until noon, then I do an hour and a half’s saxophone practice. If you have a routine like this, ideas come to you by the activity of working with the materials in front of you, or you get bored.

What’s your advice for upcoming composers?

Don’t forget that creating music is a rebellion against the mundanities of everyday life - as soon as you feel your music becoming mundane, stop!

The history of music is a resource as well as an inspiration - try to work out how your favourite pieces are composed and produced and use that information for yourself.

Become a vicious editor of your own music so you hardly need a director or producer telling you to cut stuff out - simplify your music to what you actually mean to say, and no more.

Know more about music than how to produce it. Production follows the sound in your head.

When you open up Logic or Cubase or Live or whatever, they tell you that your music is in 4/4 at 120bpm and the whole of your official Apple-approved imagination is right up there on the right in Apple Loops or in a Sculpture synth. This is a lie.

Don’t keep updating your Macs or Logic - it’s the gateway to a personal hell. Logic 9 is still better than Logic X - they just dick around with these things to make some cash - not for any musical purpose.

Work with what you’ve got - your imagination and technical, harmonic abilities.

Arrange some well-known songs as an exercise - re-harmonise them it so they sound like a fresh version of the original.

Don’t win awards for film or TV music if you can avoid it - people who you used to work for may think you’ve become too expensive.

John Harle is published by Faber Music. His latest book, The Saxophone, is out now.

http://www.johnharle.com
Features
Back to top