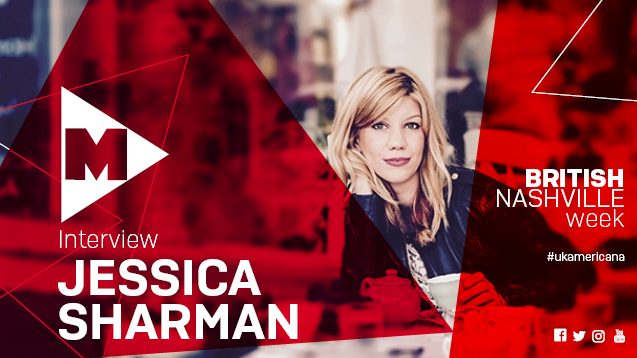 ‘Good things come to those who wait. Especially if you work like hell while you’re waiting’ - Ward Thomas songwriter Jessica Sharman tells us how she broke through…

As songwriter for hire, Jessica Sharman is currently one of the UK’s high flyers when it comes to country and Americana.

She’s one of the chief co-writers with Ward Thomas, a musical duo of siblings who have topped the chart with their second album Cartwheels.

The record was the first country LP to reach the top of the UK charts and has cemented Jessica’s reputation as a burgeoning writer, producer and musician.

She’s currently working with the duo on new material but we managed to find time in Jessica's schedule to quiz her on success, songwriting and how new country writers can break through…

I’ve been playing the piano since I was four or five. I really took to it, then started the guitar when I was about nine.

My parents were a massive influence on what I first listened to. My dad grew up in Canada listening to lots of rock and roll from the forties and fifties. My mum had musical love affairs with Leonard Cohen, Bob Dylan, Paul Simon and Art Garfunkel. So I kind of got a lovely rhythmic element from my dad and lyrical aspect from my mum.

How did you end up being a songwriter for hire?

Well I knew I wanted to go to music school when I was in my teens. But I did a degree in art history. I felt like the two were tied in, one was audio, one visual and I gigged while I studied.

I ended up going to the Institute of Contemporary Music Performance in North London, and did a year’s course in a diploma in songwriting. It was a great, professional grounding in writing music.

You were thrust into this very intensive but amazing course of writing three songs a week covering different genres. It was everything. Then we had to produce, which was where I learned how to work with Logic. That was invaluable.

What happened after you finished your studies?

I worked with lots and lots of different people. I was doing top-lining, bits of production, session playing, I was writing with just about anybody and everybody.

I went to LA for three weeks, just bought a plane ticket to see what could happen. Somehow, I ended up sat next to a singer on the plane out to LA, who was a country artist and looking for a songwriter producer.

So it’s about creating opportunities. Someone always says it’s all about luck but I strongly believe that you make your own luck. You put yourself in places where things can happen.

So I went to lots of gigs to see if there were artists I could work with, went to every networking event organised by PRS for Music or BASCA. I threw myself into it.

I ended up going on a trade mission to Nashville and that’s what sent me into writing properly for country artists.

I would recommend anyone who wants to write country music to go to Nashville, spend your first three days being the biggest tourist you could ever be. Do the Ryman Auditorium, the Sun Studios, really get into the soul of the city, and feel everything that happens and all the history that’s there.

But I got introduced to the Ward Thomas sisters in the UK via a contact. We met up for coffee, got along, realised we’d be in Nashville at the same time and met up while we were out there and just clicked. They’re really great girls, they’re so lovely, mega hardworking, and just incredibly talented. It was really, really great. I brought in Rebekah Powell and we did a little mini retreat in the country where we just wrote songs. It just worked.

What were the biggest challenges at the time?

It was hard - I’d be told that country’s not what people were after. Or my music didn’t have ‘enough woes in it’. One guy told me my music was too intellectual for radio.

But I just kept going. I had this belief. Back then we went a drinks party with all these city guys and someone asked me what I did. I told them I was a songwriter and he just asked: ‘What’s your Plan B?’

It was a real wake up call, and I remember going home and just thinking, ‘I don’t have a Plan B, this is Plan A’. That was a really special moment for me to realise how you need to keep going.

Why do you think the songs that you’ve worked on have done so well?

I mean, firstly it's just so wonderful that they have been so successful. But I think they have because of their honesty.

It was what was happening to us. It was what we’d gone through, which is what everyone has gone through, whether you’re a girl, a boy, a mum, a dad, whatever. Especially something like Carry You Home, that was the modern version of Lean On Me. It was just like, when everything falls apart, there’s always one person there just to make sure everything is okay.

Also I think we might have injected a little bit of hope into circumstances. Terrible things are happening, and it is dark, but there is always a way for the light to get in. You know, very Leonard Cohen, "There’s a crack in everything, and that’s how the light gets in". They’re also quite catchy!

Why is British Americana and country doing well at the moment?

People are wanting something different, everything is very cyclical in music, film, in the arts, because the world is cyclical, and things come around. I do think TV shows help, American TV shows come to England and people listening to music and being inspired by that music. It has given them a platform. I think particularly the TV show Nashville has been a great advocator for country not just having to be American.

All these British artists who are part of this movement have done so with authenticity too. I think that helps.

Have you any advice for songwriters

Simon Aldridge, who is now at PRS for Music, has been an amazing mentor to me, and has really, really helped me, all through my career. He said: ‘Remember, every day you hold onto the ladder, someone else steps off and you can climb up.’

But I think it’s about keeping the faith. It can happen to anyone, if you work hard. Good things come to those who wait, especially if they work like hell while they're waiting.