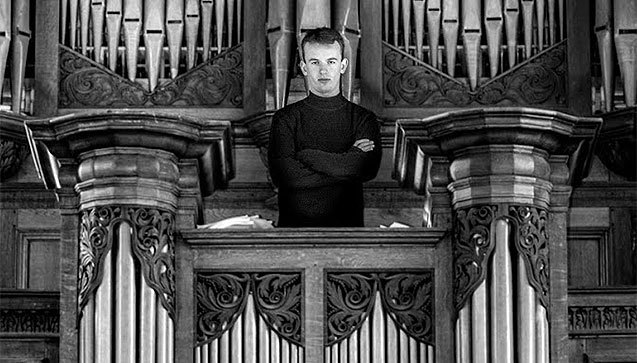 ‘I’ve written some crazy music and not everybody has taken it seriously, but it’s so important not to be put off by that': the classical composer spills the beans on his journey so far...

‘I’ve written some crazy music and not everybody has taken it seriously, but it’s so important not to be put off by that,’ says composer and organist Jay Richardson.

He’s considering some of the lessons he’s been learning along the path from student to full-time composer, and figures that having as much fun as possible is possibly the best approach.

Yet to graduate from Pembroke College, Cambridge, he’s already been Composer In Residence at the city’s Corn Exchange, and was an Aldeburgh Young Musician from 2010 to 2014.

Here, he lets us in on his journey so far and who’s been his biggest inspirations…

Have you always wanted to be a composer?

I’ve wanted to be a composer ever since I found out that it’s a thing people still do, which wasn’t until I was about 12. I started playing the piano when I was four, so I went through my first eight years of music education under the impression that nobody wrote concert music any more. That’s still quite shocking for me.

The biggest draw for me is definitely the rehearsal process. That’s when the music is at its most alive, when everybody is forced to ask each other questions and try out several options, and as a composer it’s totally exhilarating—particularly when you’re working with an incredible musician like Esther Yoo or Antonio Pappano. I’ve learned as much from my short rehearsal time with musicians like them as I have from any composition teacher.

Does your Canadian upbringing influence your work, at all?

Haha I’m not sure! I definitely have a love of big open spaces, which very probably comes from being Canadian. I like to play with big expanses of time and expansive textures as well, so maybe there’s a link. I used to think of English choral music as my formative musical experience because I was a chorister for about six years at Jesus College, Cambridge, but now I’d say I have more interest in composers like John Adams than in Tallis and Howells.

The people that have inspired me most tend to be the ones who have had the highest expectations of me: in musical terms, Frankie Williams, who convinced me to apply to Aldeburgh Young Musicians and has been looking after me ever since, alongside my composition teacher Jeffery Wilson.

Esther Yoo has also been incredibly supportive and patient. I’ll never forget the moment when I saw her part for the first piece I wrote for her back in 2016 and she’d written so many markings that there was barely any white space left on the page. Working with people like that is what makes me want to keep writing.

What is your instrument of choice and why?

The organ!  For two main reasons. Firstly, most people associate organs with churches and I want to change that. My first commercial album, I BREAK, is a 55-minute-long piece for organ. Secondly, it’s an incredibly complex instrument but with colours that are quite easily manipulated. For that reason it’s a good testing ground for new music.

At Aldeburgh you worked with composers and artists across the improv classical, electroacoustic and jazz worlds - how has that influenced you?

Essentially, it opened my mind! The experiences I had as an Aldeburgh Young Musician were amazing and unique and I learned loads of very useful skills during those years, but more importantly, I learned never to think of a piece as finished. We studied such a crazy and fascinating collection of approaches to music that I’ve never stopped exploring since, which obviously has been really good for my work. I’m still in touch with the majority of the people I met there even though I left about four years ago.

What were the highlights of your time as Cambridge Corn Exchange Composer in Residence?

Writing for a 75-piece brass orchestra from all around Cambridgeshire last year was pretty amazing because we had all kinds of people playing - I think the age range was about seven decades. There were people who had just picked up a brass instrument and others who had been playing in brass bands for their whole lives, plus professional brass players and, of course, Becky Smith and Alison Balsom, both of whom grew up in Cambridgeshire. Having grown up in Cambridge myself, it was amazing to be part of a massive musical gathering like that. Our new project with the Phoenix Centre has been life-changing for me, but of course that’s not finished yet!

What have you taken away from the experience?

This residency is what has convinced me to try and become a freelance composer after I graduate this year! For that, I’m incredibly grateful to Steve Bagnall at Cambridge Live, who sort of took me under his wing in 2016. Since then I’ve got so much enjoyment out of working on education project – I didn’t even imagine doing that before I came to the Corn Exchange and now it’s something that I definitely want to have in my career.

What advice do you have for new composers starting out?

Have as much fun as you possibly can! It will really shine through in whatever you write. I’ve written some crazy music and not everybody has taken it seriously, but it’s so important not to be put off by that. If you write something that you take seriously and someone else doesn’t take it seriously, then that’s their problem, not yours. Also, the best piece of practical advice I’ve ever heard is that both ends of a pencil are equally useful!

Exams! I finish my Cambridge course in June and then I’ll take some time off and begin working again in August. At that point I’m planning to write as much as I can and see where it takes me!