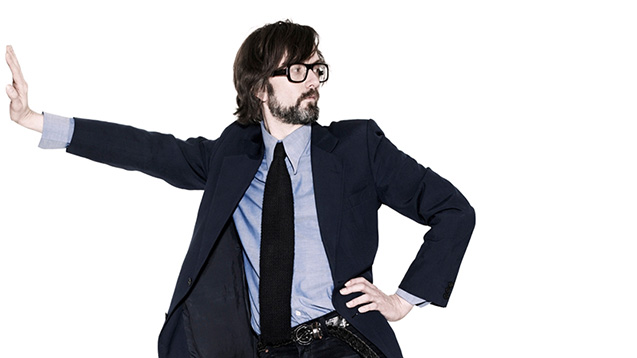 'Ronan Keating was right, life is a roller coaster': Jarvis Cocker on life after Pulp, his compulsion to make up rude ditties and the current state of British independent music...

Sartorial authority and indie icon Jarvis Cocker has always been the last word in anorak-chic.

From his teenage days fronting Pulp in Sheffield to the giddy heights of nineties Britpop, his outsider art and erudite lyricism was always delivered with razor sharp wit and a trademark limp-wristed flick.

Fast forward to 2017, and he has curated Meltdown Festival, been editor-at-large for Faber & Faber and helmed the engrossing BBC Radio 6 Music show Jarvis Cocker’s Sunday Service.

He’s still plugged in musically too, with his recent Chilly Gonzales collaborations breaking musical conventions on both sides of the pond with the mixed media Room 29 project.

We caught up with him at the AIM Awards 2017, after he’d presented Warp Records’ Steve Beckett with the Pioneer Award, to get his take on the state of British indie and life after Pulp…

The AIM Awards celebrates the best in British independent music. What’s your current take on the sector?

Independent music is, as far as I can see, the only place where stuff’s happening. I found that out from doing my show on BBC Radio 6 Music. The vast majority of stuff I was playing was from really small labels so I think that shows you how people make lots of dire pronouncements about the death of the music industry, but it is still very much alive. It’s just you have to search a bit harder to find things.

It’s growing as well, just like the way that vinyl sales are growing. I think people like it when they have to search things out, it feels a bit more personal. It means they actually buy a record and it's taking up floor space. It’s a commitment rather than just something on your computer that you forget is there. For me, as an old fashioned person, it was the way that I first encountered it so I prefer it.

Since you first started out, independent music has unraveled to become much broader. How do you feel about that?

It's good. In the olden days, if you said ‘indie’ you’d just think of somebody wearing an anorak, unable to make eye contact with people. I think it’s more now about an attitude and a spirit. That’s what I was trying to say with the speech I made ahead of Steve Beckett [co-founder of Warp Records] getting his AIM Pioneer Award. Warp’s a really good example of that - some guys in a shop who realised people were coming in buying this type of electronic music but there wasn’t enough of it and no one in the UK was really releasing it. So they thought, ‘OK, we’ll start doing it’.

They didn’t know how at first, but they were excited by it so they decided to do it. I think that’s what independent music is about, it’s not about sound. It’s more about music meaning enough to you that you get involved in it, then you try and get other people to know about it.

Like Warp, you started off in Sheffield. How do you feel about the city today, 30 years on?

I’m going up there tomorrow to finish a mix off. It’s alright, yeah. I resent it slightly coz it’s quite good now. It’s got water features and stuff like that! When I left, it was a right shit hole, a right dump. That’s one thing I won’t get nostalgic about. I think Sheffield now is more pleasant than it was when I left to come down here [London].

You still take to the stage every now and again. What’s your relationship with performance and how has it changed over the years?

The last show was in Edinburgh with me and a pianist, so that was loads quieter. It’s just the same though - when you’re on stage you try and make contact with people, you try and feel that you’re just talking to them, but also trying to put the stuff across in a way that there’s a link.

Is music still a compulsion for you?

Yes. My life is defined through music. Like the dates and important things I remember; if I hear a song on the radio, I’ll think, ‘Ah yeah that’s when that happened’. If something happens, I’ll start singing a song that either lyrically refers to it or I make little songs up in my mind, sometimes that are quite rude. You know, just to sing to yourself and amuse yourself, in the car for instance. That’s always a good one for abusing other drivers. So yeah, that’s my thing. I have other interests but music is the thing that I don’t have to think about doing because it’s always going through my head all the time.

Looking back on Pulp, is there anything you’d do differently?

Yeah, loads! Pulp was a weird thing, we were around for ages, then came to London... We’d already been going for 10 years before we broke through. Then it all got a bit too much and I backed away from it. If you plotted it on a graph, there would be a lot of ups and downs. We weren’t very good at consistency, there was no plateau. But you know what, people pay money to ride on roller coasters, they don’t pay money to like travel on one of them travelators at an airport do they? Ronan Keating was right, life is a roller coaster.