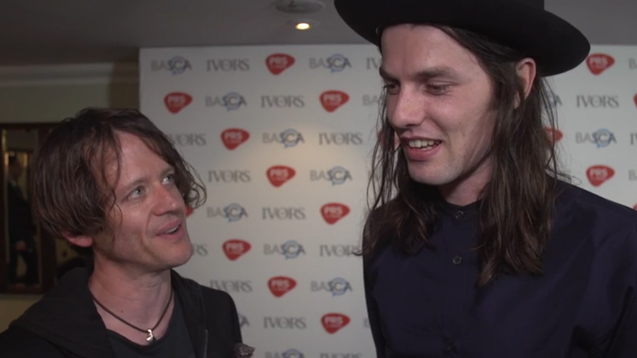 ‘It’s still kind of a whirlwind and surprising but I’m embracing it’ - James Bay on success, playing live and jamming with Ronnie Wood on stage in Brixton…

Ever since singer songwriter James Bay first burst onto the UK music scene in 2014, accolades have rapidly fallen at his feet.

His huge success is in part of course due to the quality of his songwriting and his 2014 smash single, Hold Back The River.

Co-written with Iain Archer, the anthemic track is from his debut LP The Chaos and the Calm and is one of his most well known, reaching number two in the UK singles charts. It’s seen James named as the Best British Male Solo Artist at this year’s Brit Awards and more recently awarded an Ivor Novello Award for PRS for Music’s Most Performed Work.

The accolade was presented by PRS for Music chief executive Robert Ashcroft (who also appears in the video interview below).

We were on the red carpet at the Ivors to quizz James and Iain on the origins of the song, it’s success and the strangest places they’ve heard it played…