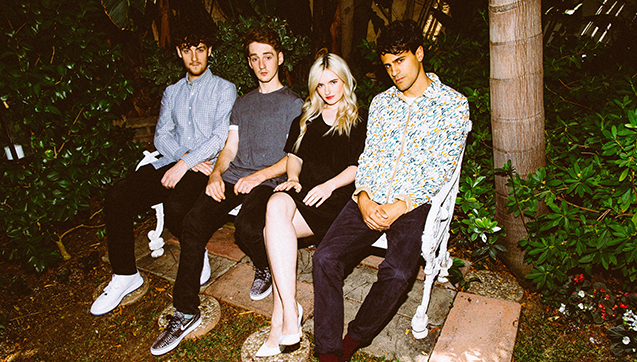 Following last year’s double-award triumph at The Ivors for Rather Be, which he penned with Jimmy Napes, he’s only gone and scored another nod.

This time around he’s been acknowledged in the PRS for Music Most Performed Work category for Jess Glynne’s Hold My Hand, which he co-wrote with Glynne and Janee ‘Jin Jin’ Bennett.

We caught up with Jack at today’s Ivors nominations launch to learn more about Clean Bandit’s new direction for album number two, how he’s coping with the post-Rather Be pressure and his co-writing stint with Alicia Keys…

How does it feel to be nominated again this year?
Very surreal. A few years ago I had no idea I’d end up doing this, let alone getting these awards and nominations. I studied as an architect and worked in that field for a number of years. Then I suddenly found myself in this world and now my main focus is writing pop music.

How did you get into writing?
Through the band, which we set up at university. It started off as a string quartet and we kept that bubbling under as a side project when we all left. I went out to Russia and was working there as a designer and Radio 1 picked up on one of our songs, Mozart’s House, and it grew from there. I had to pack the design in and do this full time.

Does it feel different being nominated with Jess Glynne rather than the band?
It’s a different thing, definitely, but I’m not sure how…

You’ve won many awards with Jess and Clean Bandit – would you say you have some special chemistry?
Yes, sure, her voice is amazing. She has a very special tone.

Are you looking for the next Jess Glynne – do you like working with unknown vocalists and songwriters?
Yeh, it’s really nice. It’s interesting now we’ve had this success, we’ve afforded to work with more high profile artists. At first it was really excited but it becomes really complicated when you’re dealing with their schedules and their labels. It’s really nice to have the freedom to work with artists who are themselves free from all of that and are also really hungry for it.

Do you find yourself writing songs for Clean Bandit separately from ones you’ll pitch to others?
Yep, mostly. Anything I play to Grace she wants! Even if it’s a very dark, abstract grime thing with horrific swearing all over it! She’ll say, ‘that’s perfect’ (laughs). I haven’t done much writing for other people so it’s all new. Hold My Hand was the only thing I’ve had out that I’ve done outside of Clean Bandit.

Do you find the strings side of things quite restrictive?
It can be but it’s also nice to have that restraint. We can work with any vocalist we want, across genres, and if there wasn’t something to tie it all together it would be completely loose and free.

Who have you been working with outside the band?
I’m not allowed to say! But I recently worked with Alicia Keys, not for Clean Bandit.

How do you see your sound evolving with all these influences feeding into the mix?
I’d like to think it’s maybe become a bit more distilled and refined. I feel with the first album, there was a lot going on, a lot of layered production. If something wasn’t quite right we’d just whack something else on top. But with this one I’m trying to strip everything back and make sure a few single lines work really well together.

How has your experience playing massive gigs changed the new Clean Bandit sound?
That’s the thing – the stuff that’s too complicated just doesn’t work and it’s just a nightmare to try to play it. It makes for a really complex set-up. That’s been another major factor in terms of simplifying everything and making stuff that hits home in a simple way.

Rather Be was a massive hit – do you feel pressured to live up to that?
There is a certain amount of pressure in that regard. I don’t really worry about it because for me, we’ve done that – we never set out to do it. For us it was a big shock. It was just a bit of a laugh.

Do you ponder on the winning formula of that song?
Yes! I do think about it! But I still don’t know what it is…

What’s in store for the rest of 2016?
My computer is heaving with stuff. I’ve had such a mental year of working with people I never dreamed I would, and I’ve now got loads of stuff that I just need to finish. So there’s no more songwriting planned, I’m getting into the nitty-gritty of recording and producing it all. It’s going to be lockdown for a while for me!

Skepta, Wolf Alice, James Bay and Jamie xx are also among the nominees lined up for the Ivor Novello Awards 2016. BASCA, in association with PRS for Music, will present the awards on Thursday 19 May at the Grosvenor House, Park Lane, London.