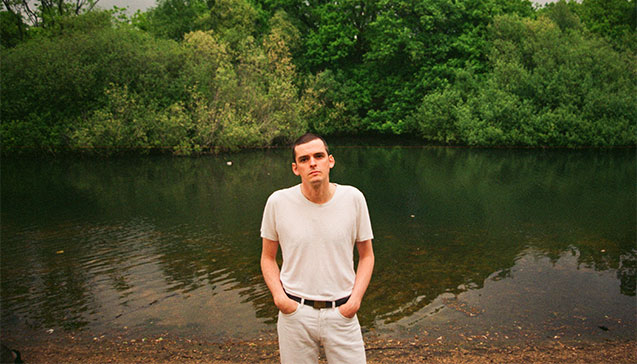 Singer, songwriter and all-round mellow fella Jack Cooper (one half of Ultimate Painting) on the making of his ace debut solo LP, Sandgrown...

‘Bruce Springsteen recorded Nebraska on one and RZA mixed Return to the 36 Chambers down onto one. Sonically, the machine really resonates with me,’ says singer-songwriter and one half of Ultimate Painting Jack Cooper.

He’s talking about the TEAC 144 four-track cassette recorder, the machine he chose to make his first ever solo record, Sandgrown, which lands later this month.

The recorder was first released in 1979, so it seems fitting that Jack, who has one ear fixed on the retro sounds of the sixties and seventies, should hunt it down.

Although he’s probably best known as one half of Ultimate Painting, alongside James Hoare from Veronica Falls, Jack has also played with Jim Noir and fronted starry-eyed guitar bands Beep Seals and Mazes.

Over the years he’s filtered the freewheeling psych of Love, The Byrds and Buffalo Springfield through his Northern English ways and words, picking up love from The Quietus, The Guardian, Pitchfork and BBC Radio 6 Music along the way.

But with the sepia-tinged sounds of Sandgrown, everything slows down for Jack, as he pauses for a moment to look back to his childhood in Blackpool.

Some of its tranquil ballads have been bubbling under for a decade or more, with summers spent by the sea, on the prom, surrounded by donkeys and deck chairs, providing the lyrical grist.

Here, Jack tells us more about the record’s origins, lets us in on his worst musical habits and explains where his love of ‘golden oldies’ comes from…

What are your first musical memories?
I don't remember not knowing The Beatles, Beach Boys, Kinks, Elvis, Buddy Holly etc. My mum would always have music on, whether it was in the car or at home. I remember being in single figures and getting really into a Troggs Greatest Hits album my mum would play in the car. I think their version of Good Vibrations really struck a chord, so my mum played me the original and I remember it already being familiar to me. I have friends who are way more knowledgeable on obscurer stuff but if I'm listening to an oldies radio station, there's rarely a song I don't know

Who or what inspired you to start making music yourself?
I first heard The Stone Roses between their first album and them releasing Love Spreads. Probably about 1993. I would read the NME and Melody Maker religiously... My dad would bring them home for me and I became completely infatuated with The Stone Roses. Their first album, the B-Sides and their interviews were year zero for me. I think Ian Brown's attitude in the face of his vocal shortcomings was inspiring. I'd track down old interviews and then order the albums they cited as influences... [The Byrds’] Notorious Byrd Brothers, Love's Forever Changes, [Public Enemy’s] It Takes a Nation of Millions to Hold Us Back, Isaac Hayes' Shaft soundtrack - they were a spring board.

You’ve been in plenty of bands - how has your sound/style changed over the years?
I don't really think my songwriting has got any better or worse. There's a couple of songs on this album that I've had in one form or another for about 10 years when I first started trying to write songs. I think my sense of what works and maybe my taste has become more refined... I think in the past and with previous bands I wasn't particularly confident in putting my foot down. That's a skill in itself.

What’s your worst musical habit?
I play guitar very strangely... I have a lot of bad habits that I just can't get away from. I taught myself so they're very ingrained. I don't really have much interest in trying to rectify anything.

What’s the thinking behind your new solo record?
I've always written about my hometown but I started amassing a collection of songs that didn't really fit in with the band. The record is a loosely connected concept record I guess... or a song cycle about Blackpool and the Fylde Coast... observations, stories, feelings. It's something I've wanted to do for a long time and I just figured it was something I had to do on my own.

It sounds really pastoral and personal – was that your intention?
Yeah completely... with Ultimate Painting or any band you're in that has a certain amount of success, you're slightly constricted by what people expect from you so it feels nice to do something that's really just for me. It could almost be a private press record to be totally honest. I really just wanted to do it for me. The pastoral feel of it is just the sound I like... I hoped it would reflect the feeling I have when I think back to walking in fields with my grandad or falling asleep working on Blackpool promenade... a haziness.

Was it strange to do something by yourself, and how did it all come together?
No, because I've always done things on my own. My old band Mazes started as a solo thing really and I've recorded on four-tracks since I was 17. I had some help but I just wanted something that was mine.

The songwriting is really strong throughout – was that something that came naturally to do or did you work hard at it?
It's something I've never worked on or tried too hard at. I'm not particularly confident in any other aspect of life but I've always felt like I have a knack at writing melodies.

You used a four-track cassette recorder – why was that?
I've had a variety of tape machines since I was 17 but, with a few exceptions, the best results I've had are on more basic machines. I just appreciate the simplicity and intuitiveness of them, so for this record I sought out a Teac 144 which is the first commercially available cassette machine. Bruce Springsteen recorded Nebraska on one and the RZA mixed Return to the 36 Chambers down onto one. Sonically it just has a sound that seems to resonate with me.

Are there any other bits of kit you’re particularly fond of or would really like to get your hands on?
No not really... I don't really care too much about gear. I just have a very basic set up and there's something about that simplicity that works for me. I have some nice guitars and a couple of decent mics.

What’s next for you?
James and I are recording a new album right now which I'm really excited about. We're taking our time with it this time around and enjoying playing some shows where we're not particularly promoting anything... jamming a little longer than usual which people always seem to respond to.

Sandgrown is released via Trouble In Mind on 25 August.