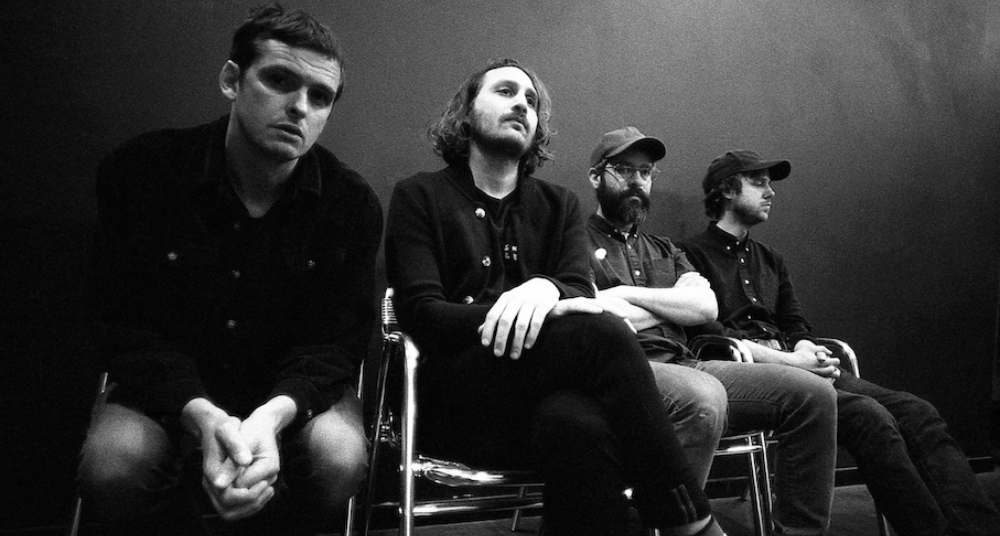 ‘Modern Nature is considerably more collaborative in many ways. I really provide a framework with the songs and the overall tone, but then whoever is involved colours it in.’

Modern Nature have a pretty impressive lineage. Fronted by Jack Cooper, ex Ultimate Painting and Mazes, the band is made up BEAK>’s Will Young, Woods’ Aaron Neveu, and Sunwatchers’ Jeff Tobias.

Their new mini-album Annual, recorded in December 2019 at Gizzard Studio in London, is another step towards something more liberated and a world away from the sound of Jack Cooper's previous bands. Will Young sits this one out, concentrating on his work with Beak, but How To Live collaborator Jeff Tobias takes a more central role, alongside percussionist Jim Wallis.

M caught up with Jack following the release of Annual to find out how he’s been handling isolation, how his latest project differs from the last and more.

You can listen to Annual below.

Hey Jack! Thanks for taking the time to chat to us. Where are you holed up at the moment?

I live in Leytonstone a couple of roads over from Epping Forest. We live in a very quiet neighbourhood, so there's definitely worse places to be.

How have you been coping with isolation?

When I'm not on tour I don't see many people besides my partner from one week to the next. I'm not particularly sociable and that's sort of exasperated by many of my friends being away a lot or they live overseas. So on a day to day level, life hasn't been that different and my friends and family have generally managed to avoid the virus, the exception being Jeff Tobias who has been laid up for a few weeks.

Well just the same as always... I think doing anything artistic depends on creating the right environment and for me that's peace, quiet and plenty of time to look at the window. Don't be too hard on yourself if nothing's happening.

My wife works in food distribution and has been working this whole time getting food out to the local community. They've been taking precautions but haven't missed a beat and that's been inspiring to see.

I've been thinking a lot and drawing on our recent touring experiences as well, particularly our American shows in January. Modern Nature is quite insular music, so it's been exciting to see and hear how it's resonated with other people.

'I hit upon some good working methods with How To Live and one of them was regularly documenting my environment and what was going on around me.'

Talk us through your new mini-album, Annual…

I hit upon some good working methods with How To Live and one of them was regularly documenting my environment and what was going on around me. After we finished that record I started a journal in which I'd write down experiences, thoughts, ideas... anything that occurred to me day to day. Words I liked, quotes or whatever. When I read back over the year, the passing of the seasons was very apparent and it seemed like a good framework for a record. Bella Union suggested us making an EP to bridge the gap between albums and so I already had this idea which I always thought of as short record or mini-album. The record is based around four main songs that represent the four seasons.

Did you have any hesitations about releasing a body of work when you’re unable to get out and showcase it live?

The record was already scheduled when the pandemic hit but I'm of the mind that records eventually find their audience and place. I often think about Phil Spector's Christmas record coming out the week of the Kennedy assassination and subsequently bombing; yet here we are nearly sixty years later and those songs are heard every year from November onwards.

Modern Nature isn’t your first foray into music. How does it differ from your work as part of Ultimate Painting?

With Ultimate Painting, there were two of us bringing song ideas to the project and with Modern Nature it's just me, so I feel like we're able to make more cohesive records now. On the other side, Modern Nature is considerably more collaborative in many ways. I really provide a framework with the songs and the overall tone, but then whoever is involved colours it in.

'With Ultimate Painting, there were two of us bringing song ideas to the project and with Modern Nature it's just me, so I feel like we're able to make more cohesive records now.'

How has your approach to songwriting changed?

With Ultimate Painting I think I'd become a little bit sidetracked and I feel like I'm back on course now and doing something that's truer to myself.

Have you found that this latest project attracts a different type of listener?

Perhaps... Somewhere along the line I stopped caring as much what other people think, so I probably haven't been paying attention to who it's attracting. I would guess that Modern Nature has less of a broad appeal but I don't think that's a bad thing.

Who are you listening to at the moment? Anyone we should be keeping an ear out for?

I don't hear too much new music but II really like the Flower Room label... Herbcraft, Ash Brooks, Matt LaJoie and then 75 Dollar Bill, Tuluum Shimmering is cool and Kali Malone. I've been listening to lots of British jazz from the late sixties/early seventies; The Stan Tracey Quartet, Neil Ardley, Nucleus and then Derek Bailey/Evan Parker.

I've nearly finished the bones of a new record, so I'm hoping over the summer we'll be able to start fleshing that out and record. I'm very excited to get in a room with the group.