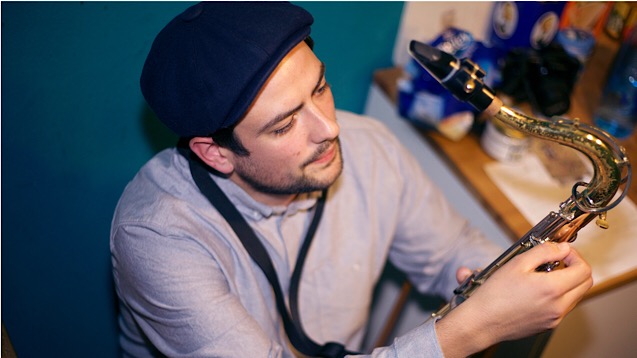 'We've heard everything from psych-out jazz to Bonobo on acid. I just like to think we're part of a movement expanding the horizons of electronic music,' says Ishmael Ensemble's Pete Cunningham.

The multi-instrumentalist and DJ is the brains behind the experimental outfit, whose celestial - and hard to pin down - sound has found fans in everyone from electro icon Caribou to Detroit techno legend Carl Craig.

Since the release of their debut EP, Songs for Knotty, in 2017, the ensemble have picked up plenty of airplay courtesy of BBC Radio 6 Music and have just released Severn Songs 2 – the second in a 7” vinyl trilogy inspired by Bristol, its surrounding regions and the River Severn.

It's a project that sees Pete pay dues to his formative years in Bristol’s late noughties scene, shaped through a spectrum of jazzed-out electronica. Commenting on how the region has influenced him, he tells M: 'Bristol has a rich musical history, but it's the community that I feel most inspires me. Even if people aren't collaborating in a direct way, they're still going to the same pubs and sitting at the same table, sharing the same ideas.'

Severn Songs 2 is out now, with the third and final instalment in the series due next year, featuring jazz trumpeter Yazz Ahmed.

We caught up for a chat with Pete to find out more about the trilogy and what's next for the ensemble...


How did you first find your way into making music?

My dad is a keen folk musician and collector of random instruments, so there was always something to play with around the house. I joined my first band with some older musicians (one being Ensemble member Jake Spurgeon) when I was nine years old. I remember we played covers of Muse, Alicia Keys and Louie Louie by The Kingsmen.

I guess I just continued the journey from there, eventually getting my own computer and a copy of Cubase. Secondary school was a big turning point for me, there were so many people into music and starting bands. The recently upgraded music block had a little studio in, we'd spend many a wet lunch break recording different ideas, all of which I'd be embarrassed to hear again, but learning those formative skills was priceless!

I grew up in a small town 12 miles south of Bristol that had an extremely healthy music scene. The now closed Wunderbar and Stones Cross pubs had live music on at least three times a week and would happily take a punt at any new band. This idea of just coming up with a name, learning a couple of songs and then being on stage the following week was exhilarating.

There was a healthy number of experimental nights going on to keep us thinking outside of the box. Namely Tom 'The Captain' Harwood's legendary solo shows and Johnny Rench's dub rework nights where a house band would play versions on a massive sound system with Johnny working the mixing desk. All very exciting and inspiring for a 15 year old.

What’s the thinking behind the Ishmael Ensemble?

The group came about after a period of touring solo shows and feeling that I was compromising certain elements by simply not having enough hands. I soon enlisted Stephen Mullins on guitar and Jake Spurgeon on keys, both of whom I've played music with since school. Drummer and friend-of-friends, Rory O'Gorman completed the backbone of the band, whilst singer Holly Wellington (Holyseus Fly / Feelgood Experiment) and Chris Hillier join us when they can. The primary focus was to expand my solo productions into a bigger and more engaging live show.

You’re preparing to release Severn Songs 2 – what is it about the region you find so inspiring?

Bristol has a rich musical history, but it's the community that I feel most inspires me. Even if people aren't collaborating in a direct way, they're still going to the same pubs and sitting at the same table, sharing the same ideas. There's a real DIY attitude that runs through everything coming out of the city at the moment. Whether it's newer acts like Idles and Giant Swan or local legends Daddy G and DJ Krust, your peers and heroes are equally approachable.

Where and when was it recorded?

The whole series is a collage of recordings made over the last year or so. We started by recording a load of drums at Rory's parents house which became the bedrock of all the tracks. I then started to form ideas in my home studio before approaching Mullins and Jake to add their parts.

How is the release an evolution of Severn Songs 1?

I think sonically I've become bolder in the way the tracks are mixed and arranged. I've been working alongside studio engineer, Caradog Jones, who is always pushing me to be more confident in placing sounds at the forefront. Particularly the guitar and synths are a lot more upfront in these new songs.

You pull loads of different styles and sounds into your music – how would you describe it?

Now that's the million dollar question. We've heard everything from psych-out jazz to Bonobo on acid. I just like to think we're part of a movement expanding the horizons of electronic music. Experimental electronica, there you go. Although now it's written down, that looks pretty naff as well. I guess you'll just have to see us live and decide for yourself.

One of my new favourite bands, Kikagaku Moyo, just released their fourth studio album. They're a psychedelic rock group from Japan that I discovered last summer. Their new record Masana Temples is a beautiful whirlwind of dizzy guitars and hypnotic rhythms.

So the third and final record in the series is out in January, featuring the amazing jazz trumpeter Yazz Ahmed. The collaboration came about after my friend Charlie worked on her album from last year, La Saboteuse. We're all very proud of the finished tracks and can't wait to share them. We'll be touring towards the end of the year and finishing off another release for spring 2019, but more on that soon!