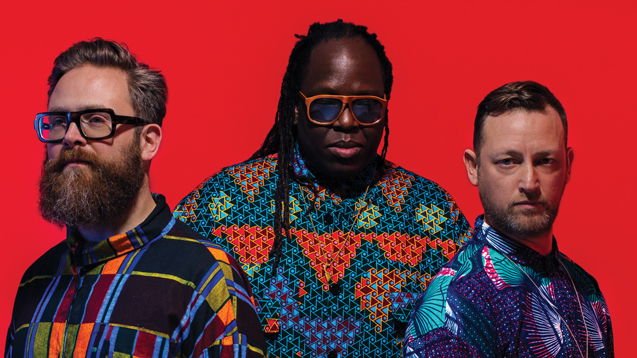 The Invisible's Dave Okumu gives us the lowdown on overcoming calamity with creativity...

London’s The Invisible are one of the UK’s hardest working bands. Led by songwriter and producer Dave Okumu, the Mercury Prize-nominated trio have played with everyone from Jessie Ware to Yoko Ono and are now making a name for themselves with their hybrid of electronic-pop-soul.

They have faced some personal challenges following the death of Dave’s mother and his on-stage electrocution during a festival in Lagos, but they’re now back and sounding more alive than ever with their third album Patience.

How did you start your musical journey?
I [Dave Okumu] come from a large family of music lovers so was exposed to pop, soul and funk from a young age. My siblings made me mixtapes, then I started buying my own records - Prince’s Sign O’ the Times and De La Soul’s Three Feet High and Rising were on constant rotation.

How did you begin playing music?
I got into jazz - Miles Davis and Dizzy Gillespie. It sounded so alive. Then I became engrossed in Tracy Chapman’s songs. My brother showed me how to play them on guitar and it was only then I realised this was a way of expressing yourself. I didn’t put the guitar down for the next five years.

How did The Invisible get together?
We go back a long way, Tom [Herbert], Leo [Parker] and I. Tom was one of a number of musicians I met at the Weekend Arts College in South London. It was a great, formative experience, meeting people my own age with real musical passion. Tom and I were in our late teens when we met Leo. We hit it off and have been playing together ever since in various guises.

Patience is your new album – what are the circumstances behind it?
Every album feels significant and so they should, otherwise there’s no point in making them. But this one is really significant as we’ve been through such a journey. During the course of the second record Rispah, my mum passed away. It was a real shock and informed the record’s whole character as it’s a tribute to her. It was a really difficult experience but precious to go through with my two best friends.

Just before that I sustained a serious injury while performing. I received an electric shock on stage in Lagos which resulted in my leg breaking. I’m very lucky to be alive. But it meant we weren’t able to tour or promote the second record which was really difficult having worked so hard on it.

How did these traumatic events impact the band?
I’m really proud to say we were able to transcend them. I didn’t think our friendships could get much deeper but inevitably, as you go through hardship, they do. We’ve grown as human beings and there was a real desire to capture that on record. That’s what bands do - with every record, they aim to create a statement about where they’re at. As we survived, we also had this sense of excitement and celebration and wanted to bring that out in our new record.

You recently directed the Gil Scott-Heron tribute gig, Pieces of a Man - how was that?
That really took me out of my comfort zone, which was part of its appeal. You never know whether you’ve done something well enough until the night so there’s this constant low level anxiety. Is there some amazing song I’ve missed? Inevitably there will be but you just need to accept that. After I was asked, I took some time entering Gil world to pick material, then started making demos and imagining who would be involved. I’d send things to people, others sent me songs saying how much they’d love to do them. Joan as Police Woman sent me demos hours after I’d asked her. I tried to create a musical foundation but also facilitate as much personal expression as possible. Hopefully it made for a worthy tribute.

Have you any advice for new artists?
Let your work speak for itself. We live in a time where it’s hard to sustain a creative career, particularly as there’s real pressure to use social media to present yourself in a certain way. That’s important if it helps a person’s creative life, but it can also be incredibly distracting. It can shift the focus from what’s important, which is making good work.

Making a record on your laptop is amazing but it also drives people into bubbles. If I hadn’t interacted with others, then I wouldn’t have learned how music works, how to build relationships, things that humans were put on earth to do. Uploading pictures to Instagram and making bedroom beats is not the whole human experience. You look at heroes we’ve lost - Prince, David Bowie - they didn’t do that, they were having conversations, experimenting and getting their hands dirty working with other people. It’s important that we look outwards and don’t miss what’s around us.

Patience is out now through Ninja Tune.

This article first appeared in the June 2016 print edition of M magazine.