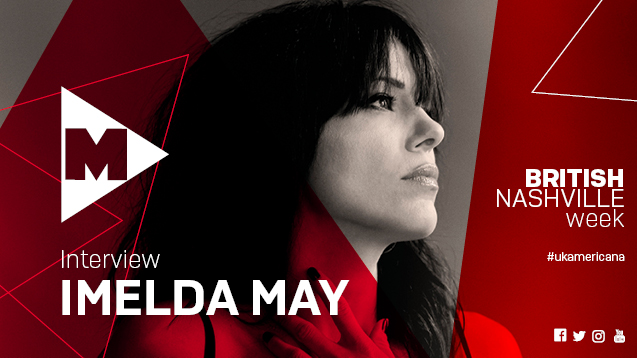 ‘You have to keep evolving as a songwriter otherwise you may as well lie down and die’ - Imelda May gives us the skinny on her new record, Life Love Flesh Blood…

From the Specials to Nat King Cole, Screamin’ Jay Hawkins to the Cramps, the music of Imelda May is rooted in rock n roll’s rich tapestry, pulling on blues through to Americana and beyond.

Born and raised in Dublin, Imelda broke through in 2008 via Jools Holland’s show, taking her rootsy sound on tour with him before heading off on her own musical jaunts around the UK and US.

With sold out gigs and successful records (her previous album Tribal went to number one in Ireland and number three in the UK), Imelda has since become a mother and seen the demise of her long-term relationship with Darrel Higham.

It’s these life changing events which make up the guts of her new album, Life Love Flesh Blood. Produced by the legendary T Bone Burnett, the record is, perhaps unsurprisingly, being billed as her most personal and intimate yet. We quizzed Imelda on the new record and why she thinks ‘you have to keep evolving as a songwriter otherwise you may as well lie down and die’…

I started in Dublin, in small clubs and pubs. I’ve never learned music in an academic way. But I certainly studied it through gigging my arse off.

I’d be singing with some of Hothouse Flowers band and Van Morrison’s band. They go down to these places to have jam sessions, and I’d sit in, and I learned. I just never really left. I listened, took criticism and tried to improve. And that’s a big thing of mine, trying to continuously evolve.

What was the tipping point for you, when you realised that music would be an all-encompassing thing?

Life Love Flesh Blood is your new record. How did it come about, and what was the inspiration behind it?

Life in general. It’s just all-encompassing. I went through a big break up of a long marriage. I became a mother not long before that, and then I fell in love again, I got my heart broken again. So, I had love, I’ve had lust, desire, guilt, regret and hope. It’s got that title because in a way, I was putting my flesh and blood into each song.

I wrote with freedom as I didn't know where I was going with it. I found that really liberating. I thoroughly enjoyed writing this album because of the freedom I felt.

How was working with T Bone Burnett?

He’s a wonderful man and I just loved his work. I love his respect for the past, and his fighting for the future, he’s always open minded and ready to try things, he’s very creative. And he’s bad ass. He tested me a little bit, at the beginning, to make sure that we’d get on and that I wanted him on the album for the right reasons, not because he was T Bone Burnett. And he does like to party too.

This is your fifth album - how have you grown as a writer over each record?

The first album gave me confidence, I wrote two or three songs on it. Two of them I think, which were awful. One song I liked. And that one song gave me the confidence to try more.

I was writing anyway, I was writing since I was a kid, but I never did anything with them. Because I just worked quietly on a lot of songs, nobody knew I was writing them, not even Darrel. And then, by the end of two rehearsals, I got a band together, got into rehearsals, and started working on them, and then recorded Love Tattoo, and then got Darrel to join the band afterwards, and then it went on from there. But each song, each album that I write, I want to get better. I want to keep evolving as a songwriter. God, you have to, otherwise you may as well lie down and die.

Acts like the Shires, Ward Thomas, and Bear’s Den, are all doing really well at the moment. Why do you think these country and Americana acts are currently succeeding?

It’s time. Things come in roundabouts, everybody wants something new, and they swing around to things. Maybe people don’t feel quite as fulfilled at the moment too so they want to go back to more fulfilling music.

People go crazy when McDonald’s first rolls into town, and it gets really busy for a while, and then all of a sudden, people realise they’re not feeling so good. They’re unfulfilled so they go back to nourishing food again. It’s the same for music. It’s just makes you feel good, and especially in tough times at the moment, the world’s going through the weirdest changes.

That’s why people are going back to music that’s written and sung, and performed from the heart and the soul. You can keep your world insular if you want, you can’t help but be affected by it and it goes into your songs. There’s going to be some major changes, certainly in American songwriting, because of the big divide in that country at the moment, and of course in the world.

Have you got any advice for new songwriters, any tips you could give them?

Remember that it might not always go the way you want, it might not go the way you planned, but if you go with it, rather than against it, it tends to find its own way. And soak up all art, because it inspires you, we inspire each other. Turn off crappy television, don’t read shitty magazines, take up some good books, and some good poetry. Go to see as many gigs as you can, and just soak up the wonderful art that is surrounding you. And then put that into all of your work.