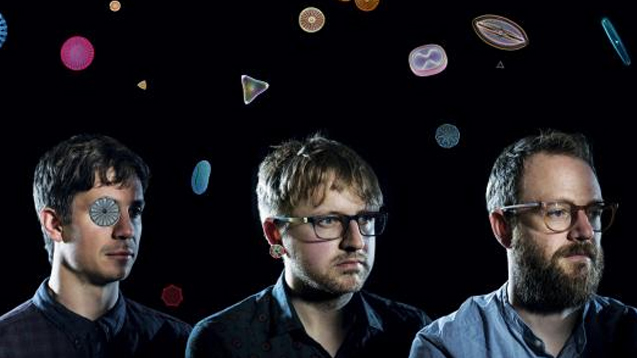 We quiz art-pop experimentalists ILK on their debut LP Y U, working with Matthew Herbert and their love for found sounds…

As members of Laurel Collective – alongside Mercury Award-winning producer Charlie Andrew (Alt J) Olly and Bob are also co-founders of In the Woods festival. Under the name Action Pyramid, Tom’s work as a sound artist has featured as installations and headphone pieces at the Tate Modern, Tate Britain and Iceland's Husavik Whale Museum.

As ILK they blend all this seemingly disparate sonic strands into one cohesive whole, which, with the help of composer and producer Matthew Herbert has become their debut LP Y U. We quiz them on the group and how the record came together…

Olly (O): My first memories go back to when a group of Brazilian musicians stayed at our home in London. Basically my Brasilian babysitter had asked if her friends could have a place to stay for a few days. They ended up staying for over a month surrounding me with instruments and their rehearsals. But it was also my grandfather who introduced me to Italian folk songs. He played (and still plays) the accordion at family gatherings.

My dad has always been a big fan of Chet Baker and Lou Reed so I have memories of hearing his albums and Velvet Underground records. My mum had quite a big collection of records too.

Tom (T): I do have recollections of my dad singing along to Lennon while cooking and probably the family sitting round watching Top of the Pops! I also remember singing a solo in my village church. Growing up we always would have a lot of jazz and blues records playing artists like John Lee Hooker, Charles Mingus, Bill Withers and then my mum getting into stuff like the early Eryka Badu.

Bob (B): I remember, for some weird reason, transcribing Jimi Hendrix lyrics when I was about eight. I also remember listening to You Don't Own Me by The Blow Monkeys, maybe because I was about five and the lyric, ‘I’m not one of your many toys’ was something I could relate to.

How did ILK get together?

O: I’ve known Bob since university. On the first night he fell through the door blind drunk. It turns out that he was actually my next door neighbour in halls. We’ve been in a couple of bands together since including Laurel Collective. And many years later I shared a house with Tom. We started collaborating on music together. Eventually the two came together and Tom met Bob and Bob met Tom.

B: Yeah I was desperate to meet people at uni and drank a lot due to shyness. And it's true I don't actually remember meeting Tom, but around that time something weird happened, we were texting each other this weird in-joke, but it turns out one of us had taken down the wrong number. Someone eventually just sent a text saying ‘leave me alone’.

Could you explain a little about the creative process?

B: Tom and Olly often amaze me in how much work they put into manipulating different sounds and choosing what goes in and out of songs. I occasionally have some input in this process and a lot of the writing is really being able to critique or accept someone else's ideas. I then try and create vocal melodies that i think will complement the approach Olly and Tom take, which is to deviate as much as possible from predictable melodies and familiar territory. That’s never going to be entirely possible but I think it's a strong basis for how to write.

O: So far we’ve started the writing process from the instrumental side of it first, getting Bob involved once we have something for him to feed off musically with some kind of vibe that dictates the lyrics.

T: We often don’t know where a musical sketch is going to go. We write using logic and a track will often start from a tiny nugget of sound on the sampler or maybe a few chords from Olly and we’ll just keep working at and playing with it with with pitching and layers of effects (we do love plugins!) until it has that certain quality which pricks your ear, that quality would be quite hard to define I think, just something that sounds a bit different. Me and Olly used to just jam with a laptop each, almost just throwing sounds at each other, seeing what stuck. The ‘found sound’ element just seemed logical to us, once you start down that path of experimenting with a portable recorder you realise the possibilities of expanding your palette of sounds and why would you just stick to just ‘traditional’ band instruments.

Y U is the debut record – what is the album about?

T: I love the fact that because of the scrapbook nature of the record, the music contains lots of personal memories. Things that other listeners will not really know, and that perhaps even we have forgotten about with the origin of a particular sound. And I like the way these sounds are shaped into something new.

O: Yeah I'd say that’s definitely true. There’s lots hidden in those sounds and there’s the idea of transformation - how you can manipulate sounds to make songs and then create new feelings and memories. And also the idea of micro/macro perspective. Zooming into a very specific sound and recording a particular aspects of it and then making something much larger with it. With regards to the lyrics there’s probably not one theme or message as such.

B: Definitely the scrapbook approach to field recordings is matched by some of the scattershot lyrics which are more about mood than logical composition. I am very happy with the intricate but also scruffy and organic sounding production Tom and Olly have brought to the project, based on their shared love of found sound, and that dovetails with their travel experiences. If there is a theme at all, we do have a shared love of the outdoors, especially places that are very off the beaten track. We’ve all been to some places not many people would usually go to, like southern Iraq and the northernmost part of Finland. I hope that, in some way some of these strange places and experiences have influenced the record.

How did you link up with Matthew Herbert? And what did he bring to the record?

T: Our lovely friends the band Hejira were kind enough to pass on our music to Matthew via his label Accidental. It’s been a real pleasure to work with him finishing the record. We did have a lot of the production side of things down already when we began working with him, and I think sonically we were on the same page for a lot of stuff, but he’s got a great ear and it’s always so refreshing to have a new pair of ears come on board. He was definitely able to make bolder decisions and choices with the music, which when you’ve been so precious about something you’ve sculpted for months you just aren’t able to see yourselves.

O: Yeah, it’s so valuable to have perspective on your work. And Matthew definitely offered that, as well as a healthy dose of encouragement. You can obsess over stuff too much - you can also lose your way and end up making weird decisions. You need that focus to push it that bit further and make it into a finished record.

What else does the future have in store?

T: More music! We’ve been thinking about making another mix or mixtape project. It’s a great way to get ideas out without being too precious about all the songs and ideas being fully formed. More gigging as well. We’d love to take the music around a bit, and to do a tour later in the year.

O: More specifically we have an album coming out this summer. So that will keep us very busy. We’ve been working on some videos as well. Plus some ideas involving amps and projectors … more to be revealed.

Y U is released through Accidental on 11 August.

Listen to Y U below.