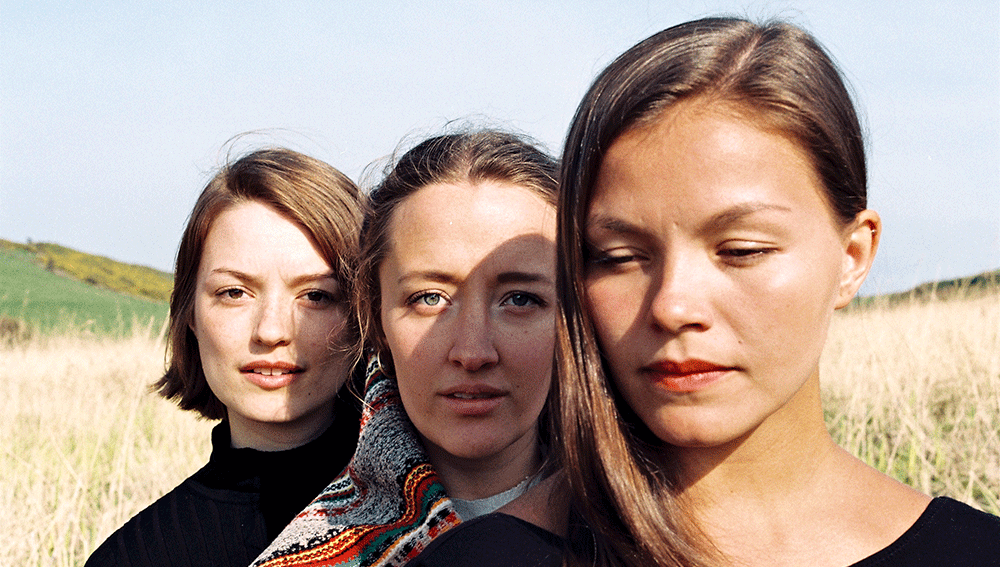 'The fundamental structure of time operates differently here than in any other place in the world: I SEE RIVERS send us a dispatch from rural Wales on the making of their debut LP...

I SEE RIVERS are a Nordic ‘float pop’ trio who channel the pastoral time signatures of their newly adopted home in rural Wales.

Having learned their craft at LIPA in Liverpool, Eline, Goril and Lill recently upped sticks to the Pembrokeshire coast with a van-full of belongings and began work on what will soon become their debut LP.

All multi-instrumentalists, they also know their way around a Scandinavian folk song, so bring a smorgasbord of influences and ideas to the table. But a new fascination with all things electronic hints at a starker edge to their music.

With PRS Foundation Momentum Fund support now secured, the band are on track to release their LP next spring, with upcoming single Collide (out Friday), signalling the next phase in their evolving sound.

Here, they tell us about how they came to be, where they’re headed and what works best when filling out funding forms…

How did you first start making music together?

Although all three of us are from Norway, we actually met in Liverpool while studying at LIPA a few years back. I don’t actually know how we decided to form the band, it just sort of happened and by the first Christmas break we were already planning a tour back home in Norway without any songs to play. We had to write a lot of songs in a short time, rehearse a lot and then before we knew it; we were on our first tour.

How has your sound evolved along the way?

We’ve never actually discussed genre or how we want to sound, but I think we started out as a folk-inspired band and then somehow meandered and floated into a more indie poppy sound. Although our folk roots are definitely still loud and proud in their own way, I think the overall sound has evolved into something a bit more nuanced.

How did you come to settle in rural Wales, and how has that affected the music you make?

We first came to Wales three years ago when we went on recommendation from our producer Toby Couling, to record our very first EP with Owain Jenkins in StudiOwz. We were there for 10 days, but after the first 24 hours we’d fallen in love. After we finished our studies in Liverpool, we rented a van and moved our stuff to beautiful Pembrokeshire.

Moving to the rural seaside has definitely affected our music, although it’s difficult to pinpoint in what way. I think the fundamental structure of time operates differently here than in any other place in the world, which has been very helpful for us when writing music as it somehow seems we have more hours in the day to do so.

Can you tell us about your new single Collide?

Collide is the second single from our upcoming album which was also recorded in StudiOwz by our amazing engineers Owain Jenkins and Emilie Krogh, our fantastic producers and beat machines Toby Couling and Alec Brits, and us.

Sonically it’s quite different to what we’ve released in the past, in the way that it’s leaning more on electronic and processed sounds, in addition to it also being more understated in a way that’s different from even our previous single Helios. We’re very excited for people to hear this side of us!

We understand you’re in the process of making your debut album – how’s that taking shape?

We’ve been dreaming of making an album for years now and it’s so exciting that it’s finally happening! We’ve written a lot over the last few months and have begun recording, but there’s still a lot left to do. Although all three of us are very organised and like to have a plan for everything, we want to be more relaxed when it comes to all things creative – we kind of just float with it. We really want to get it right, so we’ve made sure that we’re using our time to develop our concept for the album, both structurally and sonically.

It sounds like I SEE RIVERS after five years of playing, living and writing together. It showcases our new direction and how we’ve evolved as a group and individually. Although we have written together a lot in the past, we’ve also experimented with writing individually, which we think shows our different personalities in a way we’ve not done before.

What are you learning about the process of putting an album together?

We’ve learned that there’s a very big difference in making a four-track EP to making a full-length album with hurdles that have taken us by surprise. The amount of time and effort going into this is something we’ve never faced before and we’ve learnt that sometimes you have to go with the flow and adapt to new situations. Of course, there’s the humongous financial impact and the amount of time it takes to make an album, it’s a really big (and super fun) project!

You received PRS Foundation funding to help with it – do you have any tips about how to tackle the application form?

Yes! We’re so grateful to PRS Foundation for the funding and all the support throughout this whole process!

Regarding the actual application process, I think it’s important to budget in enough time! Not only will it take time to fill in the actual application, but that’s kind of the last part of the process – the things that take the most time is everything that needs to be ready beforehand (like budgets, marketing plan, formulated project description, etc).

I also think that an application like this can be quite daunting in itself, so sometimes it might help to start filling in the things you know you’ve got a good answer for first and take it from there. It’s important to have a plan that reaches years rather than months, have milestones to work towards and always give yourself plenty of time with all of it.

How is the financial support helping you?

As an independent band it can be really difficult to find the money to make ends meet, especially as we are now competing with bands on a higher professional level. Receiving this kind of financial support enables us to spend the money on making quality music in a beautiful and inspiring space, with gorgeous people, while at the same time having the opportunity to create something that, sonically speaking, will be able to stand out.

When will we be able to hear the record?

As of right now, it looks like the record will be out spring 2020!

And lastly, what does the rest of 2019 have in store for you?

We’re still writing for the album, so we’re going to prioritise that for the first few autumn months before going in the studio to record the second batch of songs. After releasing Collide with a new music video, we’ll also be releasing a third single from the album come November.

Collide by I SEE RIVERS is released on 30 August.