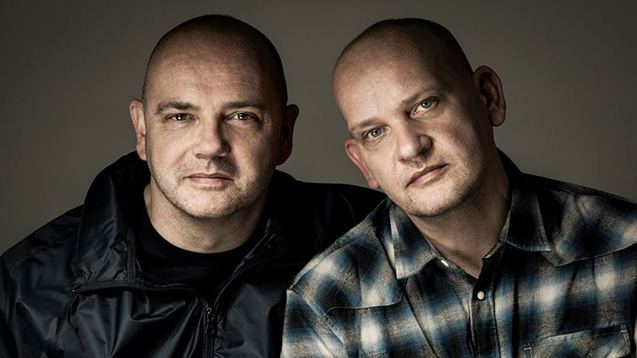 The eighties pop legends discuss the secrets to their longevity, the return of the male balladeer and why Scotland is experiencing ‘a golden era’ for music…

It’s been 30 years since brothers Patrick and Gregory Kane shot into the pop stratosphere as Hue and Cry with their 1987 breakthrough hit Labour of Love: a coded anti-Thatcherite anthem which would lead them down a platinum-selling path opening concerts for the likes of Madonna, Simply Red and U2.

In the three decades that have followed, the pair have developed their output beyond the parameters of that initial dance-pop sound, experimenting with jazz, drum ‘n’ bass, R&B and Nuyorican Latin-funk.

Back with a brand new album, Pocketful of Stones – their first record of original material since 2012’s Hot Wire – singer Patrick has discovered a renewed context for his self-defined role as a male balladeer, describing how a wave of pop artists such as James Blake, Hozier and James Bay gave Hue and Cry a sense of ‘permission’ to make the record.

The resulting sound is one that is both tense and anthemic, featuring 12 songs that navigate through themes of family (Pat’s youngest daughter Eleanor duets on Let Her Go, written in tribute to her flying the nest), politics (the album was written to the backdrop of the Scottish referendum) and the pressures of modern society.

Here, the pair discuss the secrets to their longevity and why Scotland is experiencing ‘a golden era’ for music…


Tell us about the new album, what was the recording process like?

Greg: In 2014, we decided to start a record and set ourselves the task of ‘go into the studio in the morning and don’t leave the room until you’ve written a verse, chorus, verse, chorus’. We’ve not done that before but we’ve done our 10,000 hours. If you don’t know how to write a song by now, then…

Pat: Also with this record, it was on a coin toss: four years ago Greg wanted to do a funk record, I wanted to do a ballad record. He won the toss, so now it’s my turn.

We’ve always had in the same space something very funk, R&B and soul influenced and also something very balladic. The very first record that we ever brought out – the one that got us our record deal – had a roaring funk epic on it and then a funeral song on the other side, so we’re just continuing that polarity all the way through.

You’re known for your political and social commentary in your music – what messages can people expect from the new record?

Pat: This record was written in 2014 which was a very tumultuous time in Scotland with the referendum. The politics on the record is all about transcending division. I was on one side of the divide – I wanted an independent Scotland - but when you write pop music, you’re writing with your heart and you’re also trying to get to people.

The song It Happened Here is all about the experience of community engagement in 2014, but we were singing it all the way through Brexit. We were turning up in small communities who felt they’d been left behind. That song had as much resonance to them, whether they voted remain or leave, as it did in Scotland in 2014. Sometimes records teach you what they are really about by the virtue of you making them.

How do you think your sound has evolved since the Labour of Love days?

Greg: I look back on old records and I’m quite happy with our playing and our singing, but we’ve got better at what we do. We’ve listened to a lot more music than we had when we made the records 30 years ago.

I was involved in sequencing in the beginnings of Pro Tools but now the palette is so big to make music from. If you restrict yourself to just Pat and I in a room with a piano and in four hours write a three minute song, that’s the ultimate discipline. So for me, technology’s come full circle and I’m back to just pressing play and record and seeing how it goes.


What do you think are the secrets to longevity as a musician?

Pat: Curiosity about the world. If that’s your subject matter, you’ll never stop writing about anything. I love Leonard Cohen and through his life he was constantly working away at themes and using the limits of a three and a half minute song to do that.

I’m very lucky that I have this brother here with whom I have an intuitive relationship, so when we get into a room, something delightful, to me, will happen invariably.

What advice would you give to musicians starting out now?

Greg: Be as multifaceted as you can. Don't sit and watch the TV; sit on Adobe's TV channel and learn how to work Photoshop and Premiere Pro. There's no time to lounge around now. Leisure time should be when you're on stage enjoying yourself.

My advice to bands would be, enjoy it and don't be afraid of putting a shift in. There’s so much access to knowledge now, from the Khan Academy to Lynda.com. A lot of our band are educators, they work for the Royal Conservatoire in Glasgow and they say the standard of kids that are coming to them, because of YouTube and all the free tutorials, is so high they have to up their games.

Pat: As a singer, get your technique in as early as you possibly can. I left it until about 10 years ago and I wish that I'd been more self-conscious as a singer.

As a lyricist, read as much poetry as you can. Basically have a diet of the best art you can find. The other thing is try and get out of the music business and give yourself periods of being in ‘real’ life because that will bring the salt to your lyrics. It’s about diversifying experiences. If you want to be doing this 30 years on like we are, then live a rich substantive life.

Pat, you’re known for your soulful vocals. How do you keep your voice in shape?

Pat: My singing teacher is called Jo Thompson, she has a book called Find Your Voice and it's been absolutely brilliant for me. If you want to be an ultimate singer, you have to live this monastic life and avoid anything that desiccates your throat: no alcohol, no caffeine, no cigarettes.

I would also say singers, embrace your weirdness. People will leave you alone and that saves your voice. Singers’ weirdness is a thoroughly practical measure to preserve vocal health, strength and longevity. I’ll give you that for nothing!

You’ve said it’s a golden era in Scotland right now for musical talent. What acts are you tipping?

Pat: Pronto Mama – what a band. They're like a cross between Elbow, Earth Wind and Fire and Radiohead.

Greg: I'm on the board of the Scottish Album of the Year (SAY) Award. This year's winners were Sacred Paws, they made an unbelievable Afrobeat album.

Being involved in the SAY Award, I get to hear all the music that's out there. There's a lot of people making a lot of good music just now in Scotland.

Pat: And just historically, the cost of production in music is falling which means that people can get an amazing result for less much less money than it took 20 years ago, but the virtuosity is rising so it's a sweet spot. That’s why it's a golden era: because these two things are coming together.

What is your take on pop in 2017 - how has it changed since you first started out?

Greg: I still like the whole community aspect of it. I like seeing 50,000 people singing Adele’s songs. I watched Radiohead at Glastonbury and the spell that they cast over 50, 60,000 people. We've never thought pop was any less an art form than anything else.

Our pop music has multi-levels so we like people to be able to sing it, dance to it. And if they want to dig into the words and some of the complexities of the music, it's all there for them.

Pat: My stepson is a big fan of EDM and that's something I'd quite like to explore with Hue and Cry at some point. I think Disclosure are really brilliant.

For this record we did a bit of research into the wave of male balladry that was happening with James Blake, Hozier and James Bay and then also listened to Scott Walker and other classics. I’ve enjoyed the return of the male balladeer, I think that gave us permission to do this record: we thought there was a context for it to appear in, from recent pop music.

Your music has been described as adult-orientated pop – what’s your take on that?

Greg: Sophisti-pop was the one.

Pat: I think sophisti-pop surrounds us with Swingout Sister, ABC, Sade, Scritti Politti, all that kind of stuff. So yes, ‘sophisti-pop’.

Gregory: We’ll get slagged for that!

Pat: That's always been the case, so put it in capital letters.

Greg: On the front cover!

Pocketful of Stones is released via Blairhill Records on 1 September.