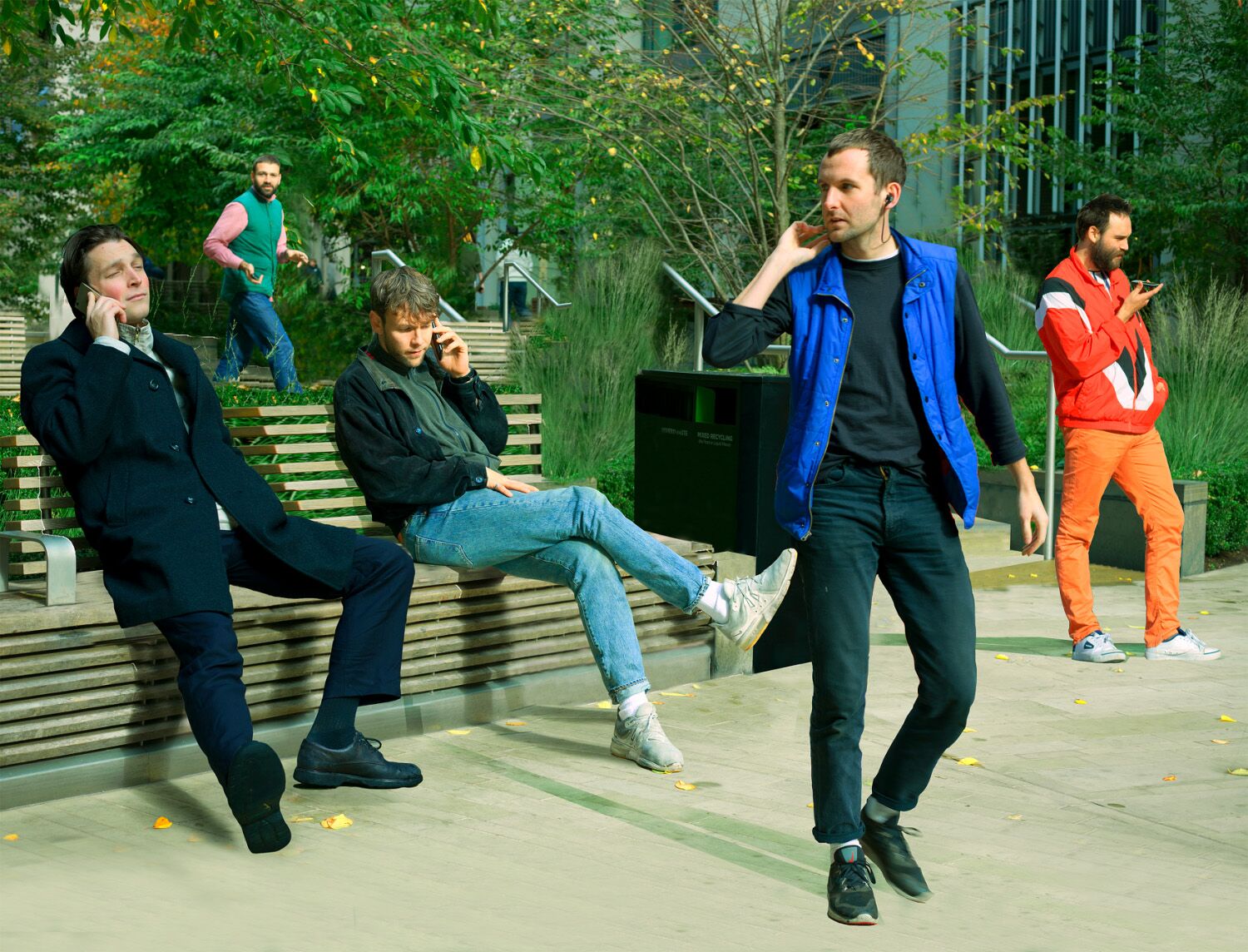 Since forming in 2013 the London-based band, which features David, Sasha Evans, Joseph Rafferty, Lawrence Dodd and Ben Vince, have imposed few restrictions on themselves, instead embracing the full gamut of what music can be and how it can be made.

Since their self-titled debut EP, released in 2013, through their first long player and subsequent live release FF061116, Housewives have remained an indefinable force of the underground.

The fact that the genre-less, experimental nature of their music has led to multiple comparisons to post-punk pioneers This Heat, and that the band have a fan their drummer and vocalist, Charles Hayward, offers some indication of the sounds they conjure.

Characteristically, the band’s forthcoming album, Twilight Splendour is another progressive addition to their catalogue, as this time they have surrendered their guitars for MIDI equipment.

Ahead of the release of their latest offering, M sat down with David and Sasha to get to the root of this shift, the process of recording the album, and the pros and cons of living on a houseboat…

Can you explain a little about the concept behind your latest record?

David Moran (DM): It’s dealing with the circumstances we find ourselves in these days, of just feeling surrounded and spending more time in a technological world than we are in the real world.
It’s been informed by the way we’ve written the album as well. It’s largely been written on computers, as opposed to guitars for our earlier stuff. We’ve written the album with software and spent a lot time on the laptop writing songs, so it’ just trying to confront modern technology and the effect it’s having on our lives.

Sasha Evans (SE): It seems like the line between technology is becoming blurred between human and machine. It’s always been there, that kind of separate entity, but now we're so attached or have some kind of connection to technology, it becomes more and more like one entity and difficult to separate the two. I think the album explores that quite well.


How has your sound developed since you debut record Work?

DM: I think it’s softened a lot, because when we first started, I think we had a lot more anger [laughs]. We were writing songs together and the tension that came out of that, just being a bit overwhelmed with everything. But having an outlet for the frustrations of the situations we find ourselves in – having no money and fresh out of university and finding yourselves in jobs you’re just dealing with.

We were trying to do something experimental then, but I feel it was more of an outpouring of that anger. Now we’ve focused more on song production and we’re probably less angry.

DM: I think the way we’ve written things has absolutely changed. We just sit, individually now, writing songs. We’re probably constructing songs, rather than just getting out all that frustration.

SE: Before it was the chaos of having separate people combine and try to co-operatively create music, and while that worked some of the time, a lot of the time it was difficult to be able to monitor and regulate that output when we’re all trying to do different things. So that the real fundamental change to how we do things now.

DM: It’s been quite circumstantial in some ways. Living on boats, there’s no real opportunity, like when we lived in a flat together, to play guitar together. There’s nowhere to plug in. So, the easiest thing is to sit on a computer.

What inspired you to swap your guitars for MIDI equipment?

DM: It was financial constraints and living on the boats as well. We had expensive guitars we could sell so…

SE: It might sound cliched, but it does feel like a natural progression. It does open up vast new possibilities.

DM: Yeah, that was big part of it as well, how limiting guitars can be. We tried to make it as interesting as possible, like our earlier stuff, and it’s fairly referential to stuff that was done in the eighties.

It was getting more and more difficult to expand on that stuff that had been done with guitar music. And we’ve always felt like we’d like to use whatever means are available to make music. So, playing guitars, for example, wasn’t a big part of it. It wasn’t important, it was just what we had at the time, what was available.

You mentioned you've moved onto houseboats, is that indicative of how difficult it is for musicians to support themselves in the capital or purely a lifestyle choice?

SE: On the one hand, living on the boats actually makes it possible to live in this city. For me personally, after I’d graduated, I could have started renting, but I do lots of different things and being in this band is one of those things. If I was paying £700 a month, I probably would have to cut out some of those things.

It was a way for me to live in the city, and by live I mean explore the city, have possibilities and pursue them. In a sense it was quite liberating, but at the same time, especially musically, there’s a lot of things you can’t do living in a boat and you have to move quite often, so it can be quite disruptive.

DM: The main pressure for doing it is financial for most of us. It’s definitely indicative of how difficult things are. We still don’t really have our own studio, it’s hard to find the time and the space, we’re all working. And having the boat is like another job as well [laughs]. It’s definitely difficult, so it wasn’t really about the lifestyle.

SE: It’s the only way I could I’ve in the city and not be a slave to, dare I say it, the system.

What impact do you think AI will have on music in the future?

DM: It’s really exciting for the future. Musically, now you can just manipulate any sound you want and effectively create any texture you can imagine. You’ve got people like Sophie, she’s doing stuff like that, and seeing her live show just opens up so many things as a live performer and on record.

Obviously, there’s the generative music that’s being done as well, I haven’t heard much of it but it’s interesting in terms of how they’re programming everything now. It seems like everything is conceivable, but how do we get there.

SE: Even if they created some completely autonomous judge or diplomat or musician, I think It’ll still be checked and appreciated by humans. Whatever creativity comes out of that is still verified by humans. I don’t think humans are going to be out of the loop anytime soon in that regard. Musically, I think it’s interesting and exciting, but for other things may be less so. I don’t know.

DM: Technology has certainly opened up loads for us. By using this computer software, you can effectively use any instrument you could imagine, instead of just sitting down with a guitar, which gets pretty boring pretty quickly. [laughter]

SE: Sorry to all those guitar lovers out there.

DM: A lot easier actually, because our first album we recorded out in France in this barn. There’s just loads of technical difficulties off the back of using live instruments and live instruments are very hard to record. It’s so time consuming, and we’d have stupid problems, like where we were staying there was an electric fence that created interference, a whole host of issues.

SE: I think Neil Young had a similar problem didn’t he? I’ve got an affinity with him.

And then we just could spend a lot of time going to where we practice and dip in to songs and work on them throughout the year. It wasn’t like we had to be somewhere for a week and get it perfect. That’s a really old-fashioned way of doing things and not very creative. With this we thought about songs over a longer period.


How do you intend approaching these songs in a live situation?

DM: That’s kind of interesting. With the software we have available we could play the songs perfectly and really easily, but that would be very boring live. So, now all we have to focus on is making a good live show. I think it’s really liberating for all of us because before there wasn’t much focus put on the performance.

I really like a funny thing that The Knife did at a festival where they didn’t play anything, they just had dancers. People were up in arms about it, but I thought it was great. Live performance is just that. It can be anything. I think it really opens things up for us and we can do what we want now. It’s becoming easy to perform.

SE: We can choose what sound to designate to what limb.


You’ve collaborated with Ben Vince again on this record, what does he bring to your sound?

DM: He’s great having there to be honest. He’s a very creative musician in his own right. He’s collaborated with a lot of people and we love his solo stuff, and we’re friends with him. He’s properly a part of the band now. He’s part of the process.

SE: We’ve got a big tour coming up. After we release the album, we have a few dates in the UK, about a week, and then we’re away for 30 days and 30 nights. Something like 13 countries so that’s going to be really exciting. We’re playing a few countries we’ve not played, because often we end up playing France, Belgium, Switzerland – which are really amazing to play in and we’re always so welcome there, it’s great – but it’s nice to go to a few places that we’ve not been before.

DM: After that, that’s the whole album thing over with and we just start writing a new album. Hopefully we’ll have a new album ready by the end of the year.

Twilight Splendour is released on 22 March via Blank Editions