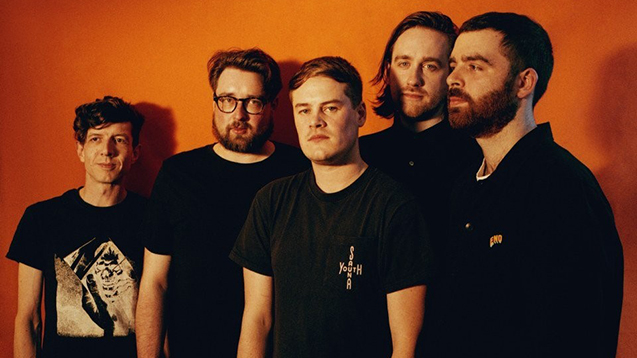 'We wanted the transition to electronic to sound natural' - MB from Hookworms on the Leeds psych lords' electrifying new record...

'As a rock band combining electronic stuff, we didn’t want it to sound like it had been shoehorned in. We wanted the transition to electronic to sound natural.'

MB from Hookworms is chatting about the vibrational shift in sound for the band's new album – the appropriately titled, Microshift.

Their first new work in over three years, it cranks up the Leeds psych lords' loop-laden sound with electronics galore and electrifying vocals.

Long-terms fans need not worry though – there's still plenty of wigged-out guitars to be found among the drum machine beats and pulsating sonics. The songwriting may be that bit more intricate, but it still comes with as much ferocious energy as ever.

Written and recorded following the 2015 River Aire floods in Leeds which devastated their studio, fans rallied round in support through a GoFundMe campaign.

That euphoric spirit to overcome tragedy is present on the record. 'All of our records are to an extent about mental health,' comments MJ. 'Largely this is an album about loss but also about maturing, accepting your flaws and the transience of intimacy.'

Out now on Domino Records and getting heavy rotation on BBC Radio 6 Music, we chatted to MB to get the lowdown...


Microshift is the band’s first new work in over three years. What were you all up to during that time?

We toured the last album for a year or so. Then Matt’s studio flooded on Boxing Day 2015 and got destroyed. It was subsequently shut for six or seven months so we had to kind of put a pause on the band for a while. He records bands for a living so obviously that was a difficult time for him. Most of 2016 was dealing with the fallout of that. People were very kind with the fundraising and that helped him get back on his feet. We spent most of 2017 working on the record – it's a good way of drawing a line under that period.

It must have been a turbulent time. Did it have an impact on the writing?

Matt's written about it in some of his lyrics. In terms of writing the music, a couple of us made some electronic stuff at home and brought it into the studio. We pumped it through the PA in the studio and everyone played around it. Other than that, we did it as we usually do: a lot of improvising, lots of cutting things up on the computer and looping things.

What were you all listening to during writing and recording? Was there anything you wanted to emulate?

As a rock band combining electronic stuff, we didn’t want it to sound like it had been shoehorned in. We wanted the transition to electronic to sound natural. We looked at other bands that have done that successfully in the past like New Order, LCD Soundsystem, Hot Chip and Animal Collective.

Matt has worked with a lot of poppier bands over the past few years and I think they’ve influenced how he’s written songs. It was a strange one for us, because we finished the album instrumentally and then sat back while Matt wrote his vocals. I was quite taken aback at first by how clean and poppy his vocals were, but obviously they really grew on me. It’s very different from the last couple of records but I think that’s great.

Are there any new pieces of kit you used on the record?

I’ve spent most of the last four or five years buying and learning synthesisers. When we first started the band nearly 10 years ago, all our equipment was shitty and broken and we kind of made do with what we had. Because we’ve had a moderate bit of success, it's allowed us to spend money on more instruments and change our palette of sounds.

Negative Space has got such a great groove to it. There are some weird robotic sounds at the beginning, how did you create that effect?

It’s definitely vowel-ly, we spent a long time listening to it and trying to decide what it was saying. We’re convinced it says, ‘hot dog’ at one point! I made the sound on my modular synth which is basically a load of synth panels that you screw into a case and kind of patch them all together externally. It gives you control to do some really weird stuff.

That was how that song started; I was messing around with that and we made a loop of it, kept it running through the PA in the practice room and played around it. Nash went away and programmed some drum machines and I made a bass line. That’s a good example of how the record went: just lots of layering ideas up.


Last time we spoke, you were all using your initials to avoid being recognised by the teenage kids you teach in your 'real jobs’. Have any of them clocked on yet?

Johnny teaches a Foundation course at the art college in Leeds, he’s had some kids clock him and be been like, 'oh you’re playing a festival we're going to'. He's been on edge that he’s going to see some of his students. We used initials at first as a throwaway thing and we’re kinda stuck with it. I don’t think that the band should be about us as individuals: it’s a sum of its parts. Without any one of us, it would sound different – it wouldn’t be the same band. But it’s essentially a daft thing that got out of hand.

You also joked that you wouldn’t be able to play Pearl Mystic live unless you had 13 musicians. What about Microshift, how will you recreate it live?

Because of the way we wrote Microshift, some of the songs, we’d never all played together. The difference now is we’ve got a little more money to play with, so we’ve been able to acquire the gear that helps us play these songs.

With Pearl Mystic, a lot of the extra tracks on the album were live instruments: acoustic guitars, percussion, layer of piano. Whereas on this album, all the extra stuff is electronic, so we can use machines to sequence a lot of it. I’ve got a machine that’s the centre of my live setup now. It controls three or four different synthesisers and drum machines so it’s kind of the master that plays all those things for me. I can hit 'play' and then I can be playing bass or something else.

You've got loads of shows coming up. How do you feel about touring?

We don’t particularly like touring for long stretches. I like my home comforts and my dog. We’re doing a week-long European tour and we’re doing all the UK tour dates over weekends because of work. A lot of the time we’re restricted by the fact that me and Johnny work term-time because we work in education. We can never be a band that goes on a world tour for six months of the year because we’d come back and we wouldn’t have jobs.

How do you juggle the two?

I think it keeps us more motivated: the band is our hobby. Whereas I'd worry that if we did rely on the band for a living, there might be a bit of resentment and having to make decisions purely for financial reasons. At the moment, we only play shows that look fun and festivals with line-ups that look good. We’re in a good position where we can do that.

What else is in store for Hookworms in 2018?

The promoter at Lost Weekend asked us if we wanted to curate a show again around this album. It’s a really cool line-up, its going to be really fun. We’ve just started booking some festivals. Then we’ll start thinking of the next record.