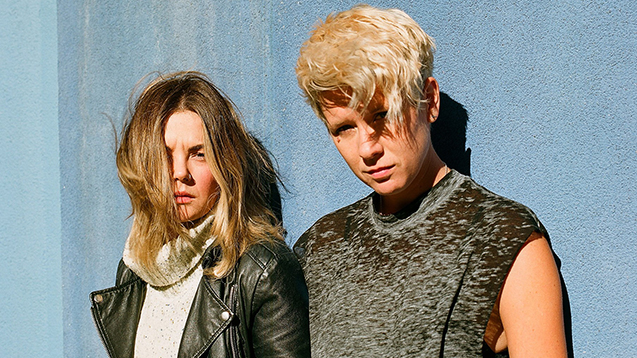 'This is going to be a rock show, not a folk show!' Honeyblood's Stina Tweeddale lets us in on how the band found their live sound and what they learnt from Foo Fighters...

Glasgow two-piece Honeyblood have been making cutting lo-fi pop since 2012, graduating from Glasgow's DIY underground scene to playing stadium supports for the likes of Foo Fighters.

'I have those words tattooed on my ribs,' she revealed. 'I guess you could call it a war cry; to have the faith to never let yourself be defeated.'

Currently working on their third record, the band have just shared an addictive new track, Swell Love to whet your appetite, recorded as part of the Babes... sessions with James Dring producing (Gorillaz, Jamie T, Blur).

A sugary rush of nineties angst and chock-a-block with harmonies and hooks, it's a three-minute wonder that continues the band's tradition for infectious, sing-along anthems.

With a freshly announced set of December headline tour dates – plus an upcoming show for PRS for Music Presents – we caught up with Stina to learn everything from her riot grrrl influences to why playing music was never just going to be a hobby...

You’ve just shared a new track, Swell Love, following your second album last year – can you tell us about it?

It was an outtake from Babes Never Die. We chose to only put 10 songs on the record so there's a few weird gems just like, hidden, and we thought it would be worthwhile to get that one out. It's an under three minute pop tune, I really like it, it's got loads of energy. We've never ever played it on a stage before so we’ll see how that goes.

My dad is a musician so music has always been in my family. I always kind of thought that if you play music, it would never be a hobby – that didn't really make sense to me. The only reason I wanted to play guitar was because I wanted to write songs, I didn't want to play covers or do wild solos or anything like that. Like most musicians, I am obsessed with music anyway so starting bands just seemed to be a natural progression. Once you get into, it I think it's really hard to stop!

The Breeders are probably one of my favourite bands ever. I listened to a lot of riot grrrl stuff when I was a young teenager, I found it resonated with me more than just in a musical sense. PJ Harvey is a big influence on me.

What was it about riot grrrl that resonated with you?

It was kind of just the idea that you could play rock music and not be into Metallica, which was what all the boys at my school were into. There were women doing it, so that was really important for me when I was growing up. Riot grrrl kind of just stuck with me and will always be a part of me.

It's great, I moved here for that reason. There is a lot of good stuff constantly coming out of Glasgow. I'd recommend The Van T's, The Ninth Wave and Lucia who we've had support us a few times. The scene is full of variety. You could go on a night out in Glasgow and find good music wherever you go, whatever you're into.

What about the venues?

It's really important for Glasgow to keep up having that connection with being a live music city. I feel really strongly about it because I grew up in Edinburgh and unfortunately there's been a bit of a downfall when it comes to live venues, mostly because of licensing. I think in Glasgow, the council understand that music is at the heart of it. You can't have amazing bands that go on to do incredible things worldwide, if you don't nurture them in the city that they've decided to set their roots in. So many monumental bands came out of Glasgow in the eighties and nineties, that they've got to keep it up!

You've supported massive touring acts like Foo Fighters. How has that experience been? Did you learn anything?

I think the main thing is there is no need ever to be rude to anyone or be egotistical. A band like that [Foo Fighters], they can still come up to the support band and go, ‘great show, you guys were really good.’ They were so genuine, Cat [Myers - drummer] bust a cymbal during our set and Taylor Hawkins gave her one. They came up and hugged us and said ‘thanks for playing’. If they can do that, there is no excuse for anyone else. Just be nice!

How do you think your sound is evolving?

Now that we’re winding up our second album, we’re starting to work on the third one. We're in that place where we don't really know where it's going to go yet. This is the exciting part, where I can be like, ‘I can literally do anything now’. It all depends on what Cat brings to the table as well. I write the majority of the songs and then we go into the studio and work on them together. They always change massively.

You've said before, "when you’re in a new band, people tell you how you should be and what your music should sound like". How did you overcome those experiences?

When you're starting out, it can be very difficult. If you're a creative person, you may not be technically minded. I knew how to plug my guitar in and I knew I could sing, but I didn't know how to explain [to engineers] what kind of sound I wanted.

Now we tour with our own sound engineer who totally gets us and is amazing. You just have to keep playing gigs and you’ll build up that rapport with someone that hopefully can come on tour with you. A lot of it is just perseverance. And telling people to turn the guitar up, turn the drums up: this is going to be a rock show, not a folk show!

You're playing PRS for Music Presents in Streatham on 28th September. What can we expect from the show?

We're at the end of our festival run now so I guess we’re still high from that. They’ve been pretty energetic shows especially because two weeks ago we did Reading and Leeds. I didn't know Idles were playing until I got an email and was like 'oh my God I'm so excited!'  I think it's going to be a good combo.

The Glasgow one is going to be our biggest home show so that's really exciting. It’s going to be called Have Yourself a Honeybloody Christmas, so it's definitely going to be themed. And then hopefully recording early next year.