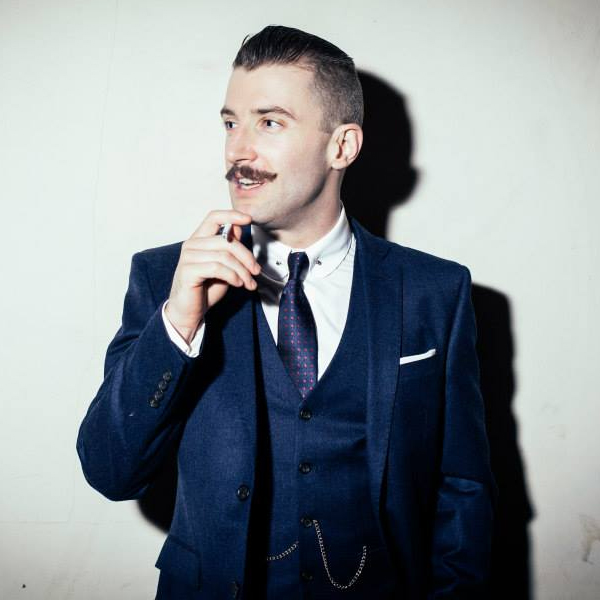 Tim Clerkin is one of half of DJ duo Eskimo Twins and is now striking out alone as Heretic. We find out how Dave Grohl is an unlikely source of inspiration for his acidic robo-funk…

Producer and DJ Tim Clerkin may be better known to you as one half of the Eskimo Twins.

The dapper pair can often be found at London’s most exciting parties, either behind the decks or giving it some on the dancefloor. His new project is Heretic, an altogether darker, more acidic proposition than his collaborative work. Considering he’s only been at it since last year, his music has been gathering some serious momentum, picking up props from the likes of Erol Alkan and Ivan Smagghe and receiving an ace cosmic remix from Tim’s hero Andrew Weatherall.

We caught up with him to find out more about his music, his hook up with Tronik Youth’s Nein Records and how Dave Grohl is a somewhat unlikely source of inspiration…

I’ve always been into music. As a small child, I used to make drum kits out of pots and pans. At secondary school I started drumming lessons, then bought a guitar and taught myself to play. I was into Nirvana and Radiohead that sort of music. I spent the remainder of my teens playing in rock and metal bands. That’s my background. When I got to uni I met Nathan, the other Eskimo Twin and we started going clubbing together. It inspired us to get in the studio and start writing.

Where did you two meet?

We met at Leeds uni, we were both on the same course doing music. We had very similar passions. We were into Soulwax, Simian Mobile Disco – when that sort of sound was kicking off. We used to go and see them and Boyz Noise play at Wax On religiously.

How do you approach writing your music?

It varies wildly. There’s no set thing I do. Maybe mess about with a drum machine, come up with something cool and try and turn that into a song. Sometimes it’ll be on guitar. Maybe that will sound good on a 303 – or just find an interesting sample.

With remixes, it’s a bit different, as there is a method - get the stems, get them in Ableton and work out what you want to use. But when it’s your own stuff, the only limit is the technology. Whatever you can think of, you can kind of make it work.

How did the Heretic project come about?

I had loads of tracks which I was never going to get round to doing as the two of us. So I thought I’d try and finish them on my own and put them out. With Eskimo Twins, we’re less heavy - most of the distorted synths in that sound comes from me. Nath is a bit more chilled out. Overall Heretic is a bit noisier, a bit harder. I did the first EP and just thought I’ve got so much more to come. We’ve got a studio in South London so an hour from my house. I can do Heretic at home on the sofa, hungover, get the bare bones of a record together and go to the studio and finish it off. It’s snowballing all the time at the moment.

Which artists are you looking for for inspiration with this harder sound?

So many – all this music from my childhood - Radiohead, Nirvana, Aphex, Metal - Dave Grohl taught me how to play drums essentially so there are lots of Grohl-esque fills in everything I do. In terms of dance music, basically everyone we play with. Simian Mobile Disco are just amazing at production. They always inspire us.

It’s much easier than it once was. The first Eskimo Twins record took us upwards of six months but as with anything, the more you do it, the better you get at it. We’re obviously still learning and I don’t profess to being an expert. I’m just all right at knocking out mediocre acid tracks at the moment.

How did you hook up with Nein?

I’ve been aware of Tronik Youth from back in the early electro days. But the end of the year before and we met up for a drink at A Love From Outer Space – we had a chat, got on really well so just started from there. It’s a wicked label, going from strength to strength. I’m lucky to be on there to be honest. It’s a little utopia which has come out of nowhere.

What are you up to next?

I’m continuing to do both Heretic and Eskimo. I’m looking at an LP next year but to be honest, my time is rammed with remixes at the moment. I’ve got a shite load to do. Three months ago I was asking to remix people. But now I’m beginning to be unindated, even with an offer to remix Andrew Weatherall. He’s my all time hero so that’s pretty exciting. I just hope I don’t fuck up.

Heretic's latest single Pollux is out now via Nein Records.