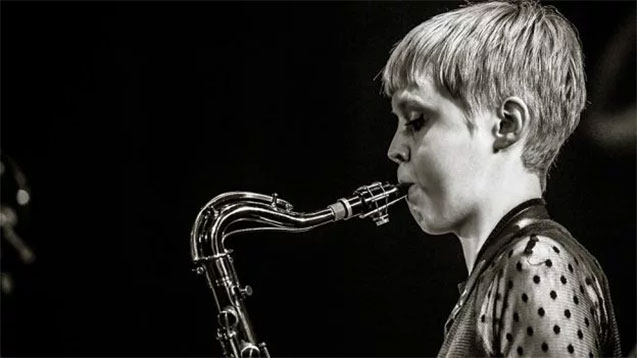 Rising jazz talent Hannah Kay on the making of her debut LP and how an early love of Sonny Rollins and Cannonball Adderley kickstarted her tenor sax journey...

Scottish tenor saxophonist and bandleader Helena Kay is a relatively new name in jazz, but what she lacks in experience she makes up for with her tenacious improv.

Most recently, Helena received the Peter Whittingham Jazz Award, presented by Help Musicians UK, and is putting the £5,000 grant to good use in the recording studio.

Helena is also prepping for an Independent Venue Week show this Sunday (4 February), alongside Laura Jurd and Jasmine Whalley. It will kick off a busy 2018 for Helena on the live circuit, with shows alongside Issie Barrett and the Scottish National Jazz Orchestra already in the diary.

Here, she tells us how an early love of Sonny Rollins and Cannonball Adderley kickstarted her tenor sax journey…

How did you first get into jazz?

My first saxophone teacher in Perth, Jim Morris, introduced me to jazz, then my enthusiasm for the music grew when I joined the Fife Youth Jazz Orchestra.

My grandad played swing piano, so I heard him playing old standards when I was growing up.

Why did you gravitate towards the sax?

I started on piano because my dad and grandad played, then violin because that is what was offered at my primary school. Then I heard some recordings of saxophone and begged my parents to have lessons, and soon forgot about the violin!

You’re working on your debut album at the moment – can you tell us more about the thinking behind it?

I'm recording with my trio, KIM Trio, featuring David Ingamells on drums and Ferg Ireland on double bass. The music will be mostly originals, as well as one or two standards. I've tried to make the tunes as varied as possible.

How is it coming together?

Musically we are almost there. We've played the music together a few times, and we have a gig at the 100 Club before the recording (4 February). There is one new track which we need to rehearse, but apart from that it is all music we have played before.

I've booked the studio for 11 and 12 February, so next I need to think about how to release the album, talk to record labels, etc.

What have been your biggest influences and inspirations?

Sonny Rollins is a big hero of mine, and one of the main reasons I switched from alto to tenor. Early on I loved Lee Konitz, Art Pepper and Cannonball Adderley, and I suppose now I play tenor I listen to a lot of tenor players, like Rollins of course, Coltrane, Hawk, Pres, all the big names, as well as contemporary musicians such as Chris Cheek, Melissa Aldana, Ben van Gelder. I love American music especially. British musicians I like include Bobby Wellins, Josephine Davies, Pete Hurt. I do listen to other instruments, there are just too many to name here!

How did it feel to win the Peter Whittingham Award?

I was very excited when I heard, and quite surprised. I know that a lot of other bands auditioned from different parts of the country, so I feel very lucky to have been chosen and really happy that I can now put my proposal into action.

How hard is it for young jazz artists to break through do you think?

It's hard for me to say as I'm only at the start of my career. There are opportunities there if you work hard but there is also lots of competition.

You’re playing at the Help Musicians UK gig for Independent Venue Week – how important are grassroots venues to you?

Grassroots venues are really important for the jazz scene; they provide a platform for all kinds of musicians to perform. For young musicians it's great because they get to hear established musicians on the scene, sometimes famous international musicians, and also have an opportunity to play themselves.

I've heard some of the best gigs at grassroots venues. They always have a fantastic atmosphere, and I've learned a lot from seeing various bands play, and from having the opportunity to play myself.

Which one is your favourite?

I really like Among Verticals by Ben van Gelder.

This month I'm playing at Ronnie Scott's with the Scottish National Jazz Orchestra, I have some gigs with Barry Green/Helena Kay Quartet, gigs and recording with Issie Barratt's Interchange Dectet, doing some duo gigs in Scotland with Pete Johnstone, organising an album launch tour for July in Scotland.