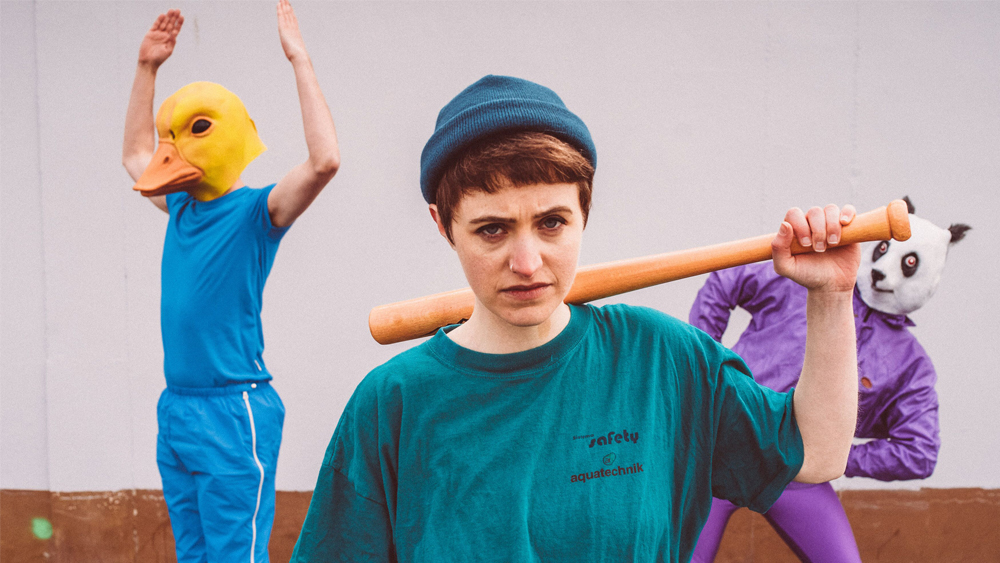 ‘Female, non-binary and queer artists have always fought for their space and it’s reaching a critical mass right now, and anyone standing in the way is getting increasingly called out,’ says HAVVK’s Julie Hawk.

‘Female, non-binary and queer artists have always fought for their space and it’s reaching a critical mass right now, and anyone standing in the way is getting increasingly called out,’ says HAVVK’s Julie Hawk.

The trio soon moved away from traditional singer-songwriter fare into the heavier territory of politically charged alt-rock, while split between London, Dublin and Berlin.

Following the release of a string of EPs, HAVVK are poised to release their debut long player, but they’ve even approached that in an unconventional fashion.

Having drip fed the songs from Part 1 of the album over the first half of the year, the record will be fully released in November 2019.

Equally, the band have taken an original approach to touring, with their recent shows forming part of the self-devised Drawn Together tour.

The thinking behind the project was to team up with local bands in each city alongside inclusive venues, promoters and collectives who support women and non-binary artist.

Here we chat to Julie about the sprawling geography of the band, their forthcoming debut and the story behind their latest tour…

How did you start out in music?
Matt and I met through the open mic scene in London about six years ago, when I was first writing solo stuff. We had an amazing gang of new musicians across the spectrum of incredibly talented and incredibly shy. Matt was looking for projects to produce so we started to work together.

After a couple of years, we reached a kind of purge where we both realised that we wanted to have a much noisier and bigger sound. By this time, we were already performing with Sam too, so we relaunched the following year as a band – we couldn’t sound more different now from when we started out, but I think you can still hear the songwriter influences.

The band is split between London, Dublin and Berlin, how difficult is that to manage?
That first open mic crew we had years ago and then running Veta Records nights in London meant we really built a base there. But there are so many ways you can build a project these days. Eventually, when we wanted to move around or when we’ve had other commitments, we made sure we didn’t let it dilute the project.

It’s been challenging but so fulfilling getting to know other scenes. And if we do go a spell without getting in a room together, we try to make every minute count the next time we get a chance. You can probably add Belfast to that list too as that’s where we recorded the album with Rocky O’Reilly. Hopping around has become second nature to us at this stage. But we’ll see what Brexit has to say about that.

How would you describe your music to the uninitiated?
Post-punk in a thumb-war with shoegaze.

What can we expect from your forthcoming album, Cause & Effect?
For me, the narrative throughout the record is definitely contrasts. We’re releasing it in two halves with all the tracks playing seamlessly into one another. That was a really freeing approach for us in terms of structure as we’ve always loved to make our sound expansive.

We have both a lighter and louder sound to what we do and we wanted to use this to explore the contradictions and tensions of living in the modern worlds – politically, socially and in terms of how we present ourselves from one day to the next, we are living through a lot of extremism.

What’s the thinking behind the Drawn Together tour?
DIY tours can be such a lucky bag sometimes, especially when you’re new in town. We knew we wanted to tour the UK this summer, but we wanted to take control of how that played out, to play in environments that we knew would support our message and to turn it into more than a string of headline dates.

We decided to organise Drawn Together – a month-long series of live shows around the UK celebrating and connecting female and non-binary musicians, where we swapped the headline slot and worked with inclusive promotors who are already trying to make a change for their local music community.

What’s your take on the position of women and non-binary artists in the music industry currently?
It’s so far away from what it could be and that is exhausting. But there’s a huge change happening, and we’re excited to be part of it. Female, non-binary and queer artists have always fought for their space and it’s reaching a critical mass right now with more projects, venues, and coverage supporting these artists. And anyone standing in the way is getting increasingly called out.

The most exciting thing about this is what it tells younger artists who’ll come next. We played Women’s Work Festival in Belfast recently and I kept hearing the phrase, “you can’t be what you can’t see.” It’s exhausting labouring this narrative sometimes but then you see the kind of impact that projects like Girls Rock School are making and it’s so, so worth it.

I would like to see that mentality being applied to industry roles too and not just those of us on stage. These are usually the decision-makers looking at funding, media coverage, festival lineups and the like – if we’re not seeing more diversity in these areas then it’s always going to be an uphill battle for artists.

What did you hope to achieve with the tour?
Mostly, we wanted to do something that made a statement about how the industry can change if enough people decide it. There’s not a shortage of female and non-binary acts out there but the infrastructure to promote them is flimsy – the default on most lineups is still white male.

We managed to book an entire tour of over fifty acts with female and non-binary members and it was not only musically mind-blowing, but we made so many friends on the road and had really positive experiences at each show. We worked as closely as we could with promoters to set the parameters and get them on board with the Drawn Together concept. This way the acts, the audiences, and we knew, “you’re in a safe space that supports you,” and that was such an amazing weight to have lifted off us throughout the tour.

Do you hope to expand it in the future?
Yes. We made so many great connections with folks who would like to get involved again, and I’m really hoping we can expand it into a more established project. There’s also a zine and art aspect to it too which emphasises the story-telling side of things – we have all experienced obstacles to do with gender and it’s really powerful to have a space to share them, even just on paper.

Is it important that you make a statement with your music?
Always. That’s not necessarily always going to be a political one, but I’ve found (and we’ve found as a group) a huge amount of freedom to express ourselves with this record, not only musically but visually too. We’ve been working really closely with our video director James Byrne for years and he adds an amazing and weird layer to everything we do. I think the biggest thing we believe in is that none of us is perfect - we’re full of doubts and chaos and we’ll always try to express this through making a statement whether it’s political or personal.

Who or what is your biggest inspiration?
If we’re talking about me personally, then Sleater-Kinney and St Vincent. So, you can imagine how excited I am that they’re working together right now.

What do you have in store for the rest of the year?
Part 2 of Cause & Effect comes out in November along with the full record out on vinyl. We’ll have a few live announcements for the second half of the year too. And behind the scenes we’re ticking away on new stuff, getting into the studio when we can, and trying to step back occasionally to appreciate ‘debut album year’.

Cause & Effect will be fully released 22 November via Veta Records.