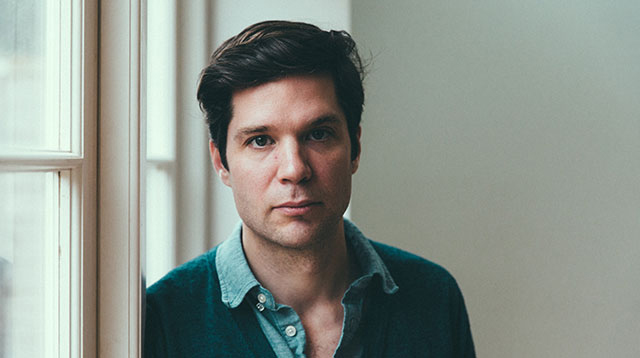 'That moment when I heard her first take coming through the speakers at the recording session… shatteringly beautiful.' Film composer Harry Escott on writing with PJ Harvey for Clio Barnard's upcoming film, Dark River...

'That moment when I heard her first take coming through the speakers at the recording session… shatteringly beautiful.' Composer Harry Escott is recalling the first time he heard PJ Harvey's vocal on a track the pair wrote together for Clio Barnard's upcoming film, Dark River.

Dark River is one of two films currently premiering at the London Film Festival that have been scored by the in-demand composer.

The second – Journeyman, directed by and starring Paddy Considine – saw Harry tasked with writing an anti-macho piece of music for a training montage. 'The note from Paddy was, "look man, this isn’t Rocky, alright?"… It was great fun,' he says.

Rising to prominence in 2005 with his score for the David Slade directed psychological horror, Hard Candy, Harry has since composed for celebrated directorial talents such as Eran Creevy on both Shifty and Welcome To The Punch, Michael Winterbottom on A Mighty Heart, The Road To Guantanamo and Face Of An Angel, and Nick Broomfield on Ghosts.

Dark River is the third film he's worked on with Clio Barnard, following his scores for the multi award-winning The Arbor and the BAFTA nominated The Selfish Giant.

Then of course, there's Steve McQueen’s seminal debut film, Shame: a film with too many accolades to mention but which no doubt helped to cement Harry's name as a go-to composer for producing artfully tense, shifting soundscapes.

With Dark River and Journeyman premiering now at London Film Festival, we chat to Harry about working with PJ Harvey, his advice for composers starting out and why dark films 'choose' him...

How did the collaboration with PJ Harvey come about? What was it like working together?

It was all thanks to Clio Barnard. During the first conversation I had with Clio about the score for Dark River, we talked about writing a song to bookend the film. She saw the film as a kind of murder ballad – akin to the tales that were told in folk songs and ballads of the seventeenth and eighteenth centuries. She asked whether I thought it was possible to draw on that art form to create something that felt appropriate for her tale, and whether I thought PJ Harvey would be a god fit to sing the song.

That is one of the thrilling parts of my job – I am lucky enough to work with people who give you so much inspiration to play with. Granted, it was a tall order, but I knew there was an opportunity to try and do something special.

A couple of weeks later, it was all happening - I was in a room with Clio at PJ Harvey’s place and we were discussing potential lyrics, going through books of poetry, nursery rhymes and folk songs. I was a fan of her music, but having had the opportunity to work with her and witness her art first hand, I think she is very special indeed. That moment when I heard her first take coming through the speakers at the recording session… shatteringly beautiful.

What got you into composing? Was it always an ambition of yours?

For as long as I can remember I have been drawn to music above all else. I still find it such a beguiling and powerful thing. When I was growing up, there were a few of us that were similarly obsessed and we used to spend all our free time playing and listening to music.

I began to write a little when I was in my teens. I never really thought about it, it just seemed like a natural thing to do for someone who was into music. I certainly would never have thought of myself as a composer. At some point I started playing less and writing more but it was a very gradual process.

I was exclusively and totally immersed in classical music. I used to bunk off school to go to piano recitals and chamber music concerts. I wasn’t trying to be counter culture or anything like that, I just wanted to go and see live music and hadn’t been exposed to anything else.

What advice would you give to composers starting out?

Don’t be too picky: just say ‘yes’! You do not know where that path is going to take you, what experiences you will have, who you are going to meet along the way and what they will end up doing. There are just too many variables to try and predict and control your journey so you might as well just get started…on anything. I don’t think it really matters at the beginning, you have just got to jump on in.

A lot of the films you’ve composed for are thrillers or contain dark subject matter. How do you choose the projects you get involved with?

Well, I definitely don’t seek out the dark ones, I think they choose me! I would love to score something a little more upbeat once in a while but, of course, the tough stuff of life is often where there is more emotional depth and uncertainty, which is rich soil for musical inspiration.

What’s your writing process? Do you have lots of pre-written ideas that you bring to each project or does everything get worked on from scratch?

Everything from scratch, I am afraid. I spend a lot of time at the beginning of each project making a palette of sounds that are specific to that story.  Then I start composing with different selections of those sounds on loop in the background and hope that something good happens…

What have been the biggest lessons you’ve learned about yourself and your craft during your time as a composer?

Let people in: be open. Composing for other people’s stories is a curious thing as it takes what is essentially a very private and personal process into an open forum, which can be a daunting experience. The natural thing to want to do is to block out external input but that is, of course, the worst thing you can do. If you can learn to be open and collaborate a little, in my experience, you will end up doing better work. It is a hugely rewarding process.

What are you working on at the moment and what's coming up for you over the next few months?

A great new drama series called Deep State. It’s a brilliant show and quite different from the last few films I have worked on which keeps things interesting…well, maybe not that different, it isn’t a Rom Com.

Journeyman and Dark River are premiering at the London Film Festival, which closes on 15 October.
Features
Back to top