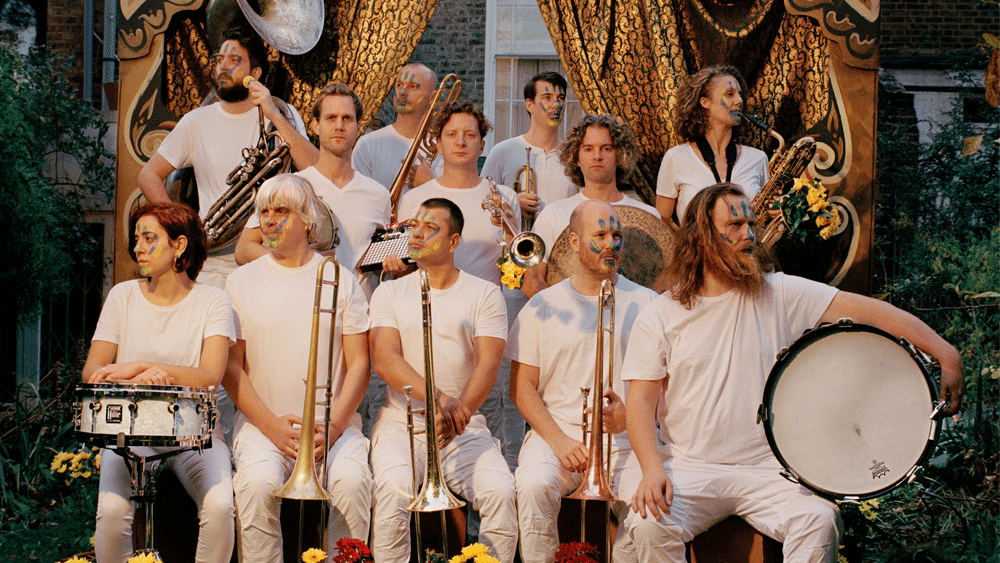 A decade in and the revolving brass collective Hackney Colliery Band are still tearing it up in British jazz. We get the skinny ahead of the release of their ace new LP, Collaborations: Volume One...

A decade in and the shape-shifting revolving brass collective Hackney Colliery Band are still tearing it up in British jazz.

When they dropped their eponymous debut LP back in 2011, they set the agenda for a decade of revolutionary revivalism, helping rev up a scene on the brink of bursting its creative banks.

Since then, they’ve played the London 2012 Olympics Closing Ceremony and exported their eclectic brassed-up sounds around the world.

Later this week, the band return with Collaborations: Volume One, an expansive odyssey of an album, which features a roll call of UK and international talent including Ethio-jazz legend Mulatu Astatke, James Taylor, Pete Wareham and Grammy Award-winner Angélique Kidjo.

Ahead of the release, and a slew of live dates, we get the skinny from the band’s Steve Pretty…

You’ve been doing this for a while now – how has the UK jazz scene changed since you first started out?
It feels more vibrant than at any time I can remember. There are so many great bands and musicians around, and what’s particularly exciting is hearing so many distinctive voices. It really feels like there’s a lot of bands around who have a very mature and distinct sound and artistic vision, rather than just being a collection of great players playing flashy stuff.

We’re lucky to have had a lot of this crop of musicians pass through the HCB ranks over the years, and it’s thrilling to see people like Theon Cross breaking out so successfully. The other trumpeter in HCB, Miguel Gorodi also has his own project which is touring this summer, and the album is full of incredibly intricate writing and frankly astonishing playing. That the scene can support two such different bands is very exciting, and I think audiences have more open ears than when we first started out; people seem less fussed about nailing things down to specific genres, which is really refreshing.

How did you first come to form a brass band?
When we first started, we were mainly inspired by the great US bands like Hypnotic Brass Ensemble, Youngblood Brass Band and all the great bands coming out of New Orleans, as well as the incredible brass sound of people like Boban Markovic from the Balkans. We wanted to take the energy and power of those kinds of bands, and bring it into a British context, referencing the amazing legacy of British music, from traditional brass bands to indie and electronica via jazz.

Are there any unique challenges in composing for brass?
Keeping one eye on the stamina of the musicians is important; it’s physically very demanding to play a full set with the band, as unlike in a big band or conventional horn section, the instruments are on your face pretty much the whole time, so building breathing and rest points into the arrangement becomes quite important. There are no harmony instruments, of course, so you have to do quite a lot of the harmonic legwork with only a few voices, which can be pretty challenging, but interesting.

How has your sound evolved over the years?
When we first started we were very much in the mould of the US and Balkan bands, but over the years we’ve moved further and further away from this sound, really. We still love all that music, but we have worked really hard to find our own sound that is now influenced more by contemporary indie bands and electronica than it is by other brass bands.

On our last album Sharpener we added a lot of electronics into the mix - I use quite an elaborate pedalboard for trumpet and horn effects, and we added a drum machine for some tunes, but we always approach these elements as jazz musicians, playing and tweaking them live, and treating them as live instruments in their own right.

There are three writers in the band - myself and the two drummers Luke Christie and Olly Blackman - and we all have quite different tastes, which is I think what keeps our sound evolving and our sets interesting. This new record really brings that diversity of influence to the fore. It’s really exciting and challenging playing across different genres but still making it sound like us, but keeping that variety is really important to us, and to audiences too.

What was the original thinking behind Collaborations: Volume One?
We’ve always enjoyed collaborating with people - over the years, we’ve played with people like Amy Winehouse, Madness and Jamie Cullum - and with this album we really wanted to bring this collaborative spirit to the fore. With Collaborations: Volume One we wanted to celebrate these diverse tastes and work with a pretty broad spectrum of artists, from jazz legends like Mulatu Astatke to stalwarts of the British scene like James Taylor and Dennis Rollins, via some left turns including two really interesting tracks with UK spoken word supremo Rob Auton and a West African-influenced tune with the Grammy-winning Angelique Kidjo.

One of the most exciting things about HCB for me is surprising people; in the early days that was about the surprise of hearing a brass band interpret drum n bass or grunge. These days, with more brass-led bands around than ever, it’s about challenging the expectation that a band with our line-up has to sound a certain way, so working with such a breadth of incredible talent helps to keep us and our audience on our toes.

And how did the album come together?
It’s been a long process! It’s called Volume One for a reason: we have a lot of collaborative tracks at varying stages of completion, and it’s been a process not just of finishing them - which, when you’re working with artists from all over the world, and doing it all without the support of a major label, is not easy - but also working out the best way of launching this ongoing collaborative project. So really, we’re approaching this as a whole new chapter for the band rather than just a new album. It’s really exciting that we’re finally ready to launch this, as it’s been a long time coming, but believe us, it’s worth the wait!

What did you learn from the collaborative experience?
The tracks were all put together pretty differently, and it’s been a really creative experience putting it all together. For some tracks the guests have come in quite late in the production stage, whereas for others, the tunes have been written collaboratively from the ground up. For Crushing Lactic, we invited one of our favourite composers Tom Rogerson (fresh from his duo record with Brian Eno, and of Three Trapped Tigers fame) to write us a tune from scratch. So we’ve had to keep a really open mind throughout.

You worked with so many notable names for it, but do any collaborations really stand out for you?
Some of my favourite moments on the album are those that are really far from what we originally had planned. When I approached Bugge Wesseltoft about guesting on Snowfire, I had envisaged him adding all sorts of chewy synth madness, but when he decided to do it on piano and I heard the result, I was blown away. Now I can’t hear it any other way! The contrast of the reflective, haunting piano with the driving horns, polyrhythms and electronic wonkiness is just so nicely balanced, and I admire him hugely for having the vision to do it that way rather than what I originally suggested. And, of course, the Mulatu Astatke collaborations have been a real treat, too; Mulatu has such an innovative, unique approach. His playing is more about creating a mood than playing some flashy licks, and the atmosphere that he creates in the two tracks we did with him is something really special.

What do you have in store for your upcoming live dates?
We are playing a handful of festival shows (Glastonbury again!) and tour dates over the next few months, playing an entirely new set of material from the album. We’re incredibly excited about the new set. It’s definitely the most ambitious show we’ve ever attempted; the music is really complex and intricate, but also very fluid, with more space to find different textures than we’ve had in our previous shows. It’s been fun seeing audience’s reactions when we have dropped one or two new tunes into sets over the past few months, and people really seem to be responding well to the new sound. What’s exciting for us is keeping the show as accessible as possible to both jazz and non-jazz literate audiences, whilst actually playing some quite complex, challenging music.

The big news for us is that we are putting on a huge collaborative show with most of the artists from the album - 5 October in the main hall of the Barbican. It’s going to be absolutely epic!

What else is keeping you busy?
Some of us are performing in A Midsummer Night’s Dream at The Globe, London, over the summer; we played their end of season party a couple of times, and they liked us so much that they wanted to have us in a show! So that should be fun. I also have a new solo show about the evolution of music - what music is and why it matters - at Wilton’s Music Hall on 16 July, which has been in development for a long time, and should be really interesting. And I’m doing more and more composing work for TV, which has been a great parallel career, and allows me to explore the more electronic side of what I do. Busy summer!

Collaborations: Volume One is released on 7 June 2019. For pre-orders, see https://www.hackneycollieryband.co.uk/
Features