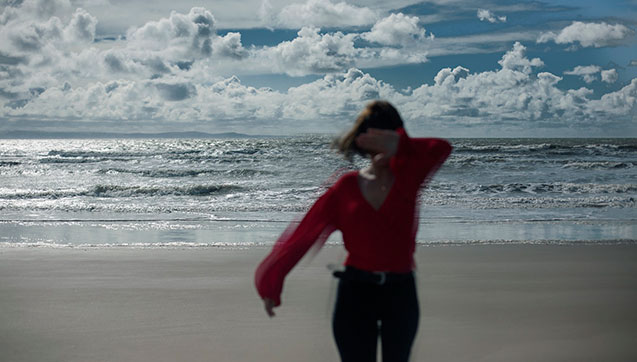 'I had exciting ownership over words that have never been set to melody in recorded times': space age synth-popper Gwenno on unearthing the ancient Cornish tongue for her ace new LP...

Award-winning artist Gwenno explores the stories and sounds of her Welsh-Cornish heritage through a prism of space-age synth-pop and syncopated melodies.

Her debut solo album Y Dydd Olag (The Last Day) was a retro-futurist celebration of motorik rhythms and dystopian futures, and scored her the Welsh Music Prize on its release in 2016.

Sung entirely in Welsh, it saw the ex-Pipettes singer-songwriter cross over into cosmic turf.

Now back with a new record, Le Kov (The Place of Memory), Gwenno has turned full space oddity, with an interstellar soundworld constructed entirely in another ancient Brythonic tongue…

Why did you choose to write and sing your new album in Cornish?

I was searching for the same sense of adventure I felt when making my first record, and I didn’t want to repeat myself. I always like to switch things up and try something unfamiliar - I find a lot of freedom in that approach. I felt so lucky to have another language, it was like having a different instrument to play.

I wasn’t raised in Cornwall, so speaking the language was always a bit of an oddity and an anomaly really. My dad taught me and my sister when we were very young. With this record, I decided to acknowledge that influence and explore another part of myself.

Was the writing process more challenging?

Yes definitely. But this was an opportunity for me to improve my language skills and take ownership over the writing. When you set out, you tend to imagine all the music you’ve ever heard in a particular language. But there are so few recorded songs in Cornish, there’s less context and, for me, more freedom to create an imagined place where my songs could exist.

Interesting that there is still some recorded Cornish music in existence – what’s it like?

It’s interesting! I heard a couple of albums a lot when I was very little. One is by a band called Bucca. The album is kind of folky and it’s called The Hole in the Harpers Head, which is An Tol an Pedn an Telynor in Cornish. The melodies are similar to Breton folk music, which has a really deep sadness and melancholy to it, which perhaps differs from a lot of Welsh folk music I’m more familiar with.

The other really important artist for me was Brenda Wootton, a folk singer. She’s amazing. She recorded a lot of albums, and always sang in Cornish, even though she wasn’t a fluent Cornish speaker. She was a big influence. I thought a lot about her.

Are there common characteristics in the Cornish music you’ve heard?

I feel that, because of the landscape and the history - the industrial heritage of Cornwall - there is a real strength to the music that they make. Brenda is a lot like that. When you think of folk singers, a lot of them can be quite fey and can be light. But Brenda’s very strong. I’ve just realised I’ve been playing those records for my son, he really likes them. It’s just a full circle isn't it?

What came first for you – melodies or lyrics?

I like to create sound palettes. I do a lot of reading, watching and thinking before I start writing. I like to collect a jumble of ideas so that when I put a song together I can draw from that pool. With the Cornish language, I felt I had really exciting ownership over some words that have never been set to melody in recorded times.

Your debut album won the Welsh Music Prize – did you feel any pressure following that?

The response to Y Dydd Olag was incredible but you don’t have any control over that side of things so it can’t really be a motivating factor. You can’t be driven by fashions or try to fit in with themes and trends. It’s capitalism, isn't it?

If you’re trying to make something that has artistic value to it, you can’t dictate whether it’s going to be relevant to people within a capitalist society. You’ve just got to concentrate on projects that are interesting to you.

How did you come to find your solo voice?

I think I really found it through my home and community languages. It was a big thing for me to discover that autonomy. I’ve learned you’ve got to remind yourself, constantly, what interests you about music and art. Generally, it’s different points of view or it’s an exploration of some form of identity.

You’ve moved back to Cardiff after a long stretch in London – how connected do you feel to the music scene there?

Very. It’s quite interesting across the whole of Wales because there’s a really vibrant scene – particularly within Welsh language circles. It’s lovely because people know each other. We have Cymru, BBC Wales, and there is also a strong live network enabling bands to really practice their craft.

There are plenty of gigs to play, there are radio sessions and even TV appearances to do sometimes… It becomes really exciting because you are working with musicians right across the country. I feel privileged to be a part of it.

What new music is tickling you at the moment?

I’ve really got into listening to the music of Hildegard von Bingen, she was a saint and the first female composer. She wrote a divine play, which I think was partly inspired by one of her nuns leaving and going to form another convent. This was back in the 11th or 12th century. It’s had a real impact on me.

I’m always constantly surprised by how little feeds into popular culture, and how limited pure pop music can be. I’ve come to appreciate that music is something which happens in so many different ways - but it doesn’t seem to always get reflected in pop music. Personally, as a music fan, I want more from music.

Le Kov is released on Friday (2 March) via Heavenly Recordings.