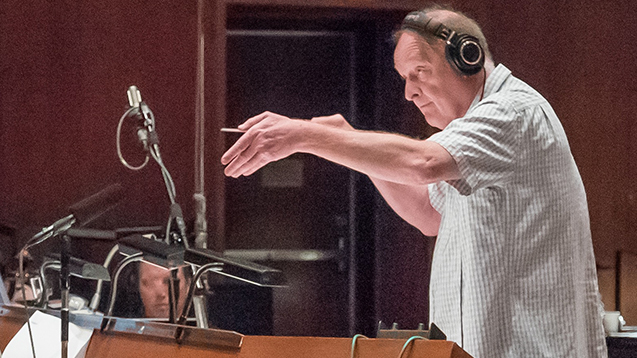 ‘Composers are like sharks - if we don’t keep moving forward, we die’ - award winner Guy Michelmore lets us in on his new course and how to make it in the film music industry…

Guy Michelmore is an award winning screen composer with a CV to make him the envy of his peers.

Over the last 20 years, he’s developed a serious reputation as an expert crafter of soundtracks to visual adventures on both the big and smaller screens.

His best known work is for Marvel, including eight animated features films and a number of TV series such as Avengers: Earth's Mightiest Heroes, Iron Man: Armoured Adventures and The Super Hero Squad Show. Guy has also worked extensively scoring natural history films and was nominated for an Emmy Award for his score to The Queen of Trees. His latest venture sees him heading up ThinkSpace Education, a new online music school offering courses in composing for film, games and TV. We grill him on his composer inspirations and what this new educational initiative has to offer...

As a ten year old, I was hugely fortunate to learn the mouth organ with Larry Adler. He was the first person I met who actually made music for a living and was such an incredible musician and a wonderful man. I realized there was a chance I could do this and get paid for it!

What was your ‘big break’ with music?

Not so much one big break as an ever increasing number of cracks in the wall. The biggest leg-up was probably when I got the first of the Marvel animated feature films. That led to seven more films and over 200 episodes of television, many happy years scoring Captain America, Hulk, Thor and the rest of the Marvel gang. That was, as they say, a very good day.

What qualities do new composers need to have to make a living from their music?

Talent, perseverance and luck. The willingness and ability to find a distinctive voice of your own so you stand out from the crowd. Being a great communicator and being very client focused, always remembering you’re part of their greater creative project. It’s tough out there as there is a lot of competition, but there's also a lot of media that needs music so the market is growing.

How do you approach each project? Do you employ different creative methods when composing for film compared with TV?

In some ways the early part of the process is very similar. Theme development, finding the sound that makes the film or TV show work and makes it unique. Working out the logistics. The difference is then in execution. With film it’s a steady increasingly frenetic dash to the line. Television is a marathon that can go on for years. A big TV show is more like a normal job where people go on holiday, get sick but the whole thing just rolls along, so you have plenty of opportunity to explore every aspect of your main idea.

Have you a favourite studio?

The late lamented Whitfield Street, but now it’s an office block! I really enjoyed working at Warner Bros in LA a few months ago. To be honest, it’s not so much the studio as the musicians in it that make it special.

What is the most essential tool in the musical armoury of a screen composer?

Imagination and passion. But you didn’t really mean that did you? The DAW. It’s where you live 14 hours a day inside Cubase, Digital Performer or Logic. Five years ago I would have said great sample libraries which is still true, but the freshest sounds at the moment are either sound design, synths or live instruments.

Which areas of the screen composer world are offering the most opportunities?

TV remains very busy and still growing. Subcription Video On Demand is challenging in terms of the lack of royalties, but TV is still the biggest employer of composers. Games are great - employment growing at 10 percent a year and there are some very decent budgets around.

Is the screen composing sector in good health? Are there plenty of projects and opportunities available?

Broadly speaking, yes. The opportunities are there and growing fast but the competition is probably growing faster. There does seem to be a finite amount of talent about, so really good people still get plenty of work if they know what they’re doing.

TV and games are doing well, so is library, but UK independent movies seem to be struggling. Only about five percent make a profit and there seems to be almost no middle-market which is where most composers are looking to make a living. With very little between a low budget film and Harry Potter it’s hard to make a career as a film composer in the UK. That’s not the case in the US or in many European countries I think.

What was the thinking behind the new ThinkSpace Education Master's Programme?

To give up-and-coming composers a real-world working experience, tutored by working professional composers and orchestrators. All of us know how hard it is to get started and how hard really good honest feedback is to come by. I’ve been teaching composers for 20 years and the master’s programme is a logical extension of that. Because we teach online we draw students and tutors from all over the world. Studying online is also very much like working as a freelance composer so it is good preparation for the life that awaits them after the course.

What will potential students learn from the syllabus?

The technical, creative and business skills a composer, orchestrator or sound designer needs to succeed. Finding that space within a client’s brief to produce music that is both exactly right for the project and also has a distinctive voice of it’s own. That’s what we’re aiming for. They’ll learn to write a lot quicker as well. Productivity is vital today if you want to make a living. We want to give talented composers and orchestrators the leg-up they need to really get going.

Have you any more tips for new and emerging screen composers?

It’s more important than ever before to try to sound different and find your own voice. Don’t live in the past. Listen to what the market is buying - it’s all around you. Martin Phipps’ wonderful score for War and Peace is a perfect example of how to make a genre you think you know so well, completely new.

Ennio Morricone’s The Mission. The greatest score not to win an Oscar.

If you had the opportunity to provide a score for any film or TV series, what would it be?

A show, film or game that we can’t quite imagine yet. That’s the most exciting thing. Something new, different and challenging. Composers are like sharks - if we don’t keep moving forward, we die.

The deadline for applications for September entry to ThinkSpace's Master’s Programme is 31 July.
Features
Back to top