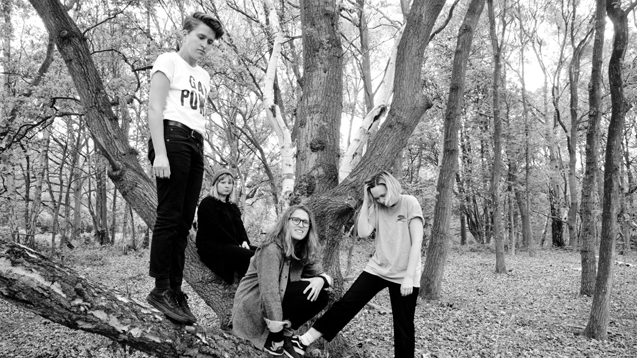 'It’s important to all of us to be "role models" or rather just be proud of our queerness, and our own individual gender identities.'

Graceland drummer and PRS Foundation's very own Maxie Gedge (pictured above, left) is chatting about how, for the buzz pop quartet, it's essential that they use their platform as musicians to champion and represent gender and sexuality.

Having made music together in various forms over the last 10 years, the four sisters from the East have gone from strength to strength since emerging as Graceland in 2016.

Debut single Fleetwood, produced by Spring King’s Tarek Musa, was the first riff-heavy taster and was followed by a signing with Club Fandango, stints at Bestival, Norwich Sound and Vision and The Lexington, plus the likes of DJ Gemma Cairney, Rob Da Bank and BBC Introducing Norfolk pledging support.

On record, their crunchy indie sits somewhere between The Breeders, Pixies and Warpaint, weaving sugary melodies around pulsating beats that build, simmer and then take off again.

Live, they're a ball of smiles, energy and infectious banter that'll leave you feeling like no Graceland gig is the same as another. Just see for yourself at their freshly announced show at Norwich Arts Centre on 9 February supporting indie rockers INHEAVEN.

Here, we chat to Maxie in an extended interview taken from Mx music: deconstructing gender and sexuality about musical inspirations, inclusivity supporting venues and why Norfolk is 'a very strange and creative place'...


How did the band get together? Was there a vision for what you wanted to create or did it come out naturally?

We have been in bands together in different guises for nearly 10 years. It was the result of lots of bonding, shared ideologies, ambitions and musical loves.

What got you into playing music? Are there any drummers that inspired your style?

I was a guitarist first so I think/hope I come at drumming with non-technical, melodic vibes. Drummers that I love are Janet Weiss, obviously. Georgia is incredible, Levon Helm is a joy to listen to and Femi Koleoso is mind blowing. There are lots of Norwich drummers and friends that influenced me hugely when I started – Mike Sheils! Lisa Horton playing drums in Cruiser Chimps was just incred. Plus Sam Riviere in Le Tetsuo, Smit in Fever Fever, the beats of Ggggrits, UHOHs and Fliss in Violet Violet.

You’ve been described as ‘Norwich’s greatest musical export’. How do you think the city has influenced your sound?

It is probably our greatest influence! We write a lot about the Norfolk landscape: the music scene, the venues, the studios, the people... It's a very strange and creative place.

How do you feel about the current state of venues in the UK as well as the wider music industry? Does more work need to be done in terms of inclusivity?

I think everyone needs to do more until it is common place and standard practice for LGBTQ people to feel at home and totally comfortable in all arenas. I actually think venues provide a particularly forward thinking and vital space for expression and exploration of LGBTQ issues. Aiming for greater access clarity and providing gender neutral toilets is a good start, but we all have a lot of work to do.

Do you think things are changing in terms of the profile of, and support for, LGBTQ artists?

It’s hard to tell. I surround myself with positive, kind and right-on people so my gauge is sometimes skewed! Part of what I try to do in my bands, club nights, and work is provide spaces for, and champion, LGBTQ artists. It often feels like you take two steps forward and three steps back but I think in popular culture there is progress overall.

I think the main challenges include stereotyping, lack of role models, and mainly a lack of awareness and understanding. There’s different challenges in different genres but it’s so ace to see amazing LGBTQ artists in the mainstream like St Vincent, The XX, Kate Tempest and Sam Smith. Amy Lamé, London's first Night Czar is awesome too.

How do you think your experiences of gender and sexuality affect your output as a musician?

I think it influences everything I do. Identities, especially gender identities, are complex and at times hard to navigate and understand. I feel a bit of a struggle between fighting for my gender and also not being defined/restricted by it. A lot of my personal music-making attempts to see what happens when you strip identities and subjectivity from the work itself, but in Graceland we definitely write a lot about identity. It’s important to all of us to be ‘role models’ or rather just be proud of our queerness, and our own individual gender identities.

Do you think there are any significant steps forward in terms of LBTQ artists being able to break through and have a voice?

DIY spaces, venues, promoters, festivals and other creative organisations in local scenes provide an essential platform and environment for LGBTQ artists – the scene in Norwich did for me. Because anyone can get involved and own it/shape it, those communities tend to be more reflective and diverse than the mainstream.

This year marks 50 years since the passing of the Sexual Offences Act 1967. How do you think things have changed?

Individuals have such different experiences, and recently it feels like there are waves of positivity that are quickly followed with backlashes. There’s a long way to go but legalising gay marriage was obviously a very important change. I think often people and organisations want to be better but they don’t know how to be. I think we need to address the shame and defensiveness which can stand in the way of inclusivity. It’s ok to make mistakes and feel out of your depth or confused and it’s ok – in fact it's necessary – to call out and be called out.

You were quickly signed to Label Fandango - how did that happen and what advice would you give to bands when thinking about signing with a label?

We have always loved what they do (both at Fandango and Fierce Panda), so we played some shows with them and got to love them even more. My advice would be to write your own career – the pace, the direction – and find people to work with who want to love and nurture that.

We're writing and recording our debut album. Touring and collaborating. Ellie is working on her first film and I'm getting married.
Features