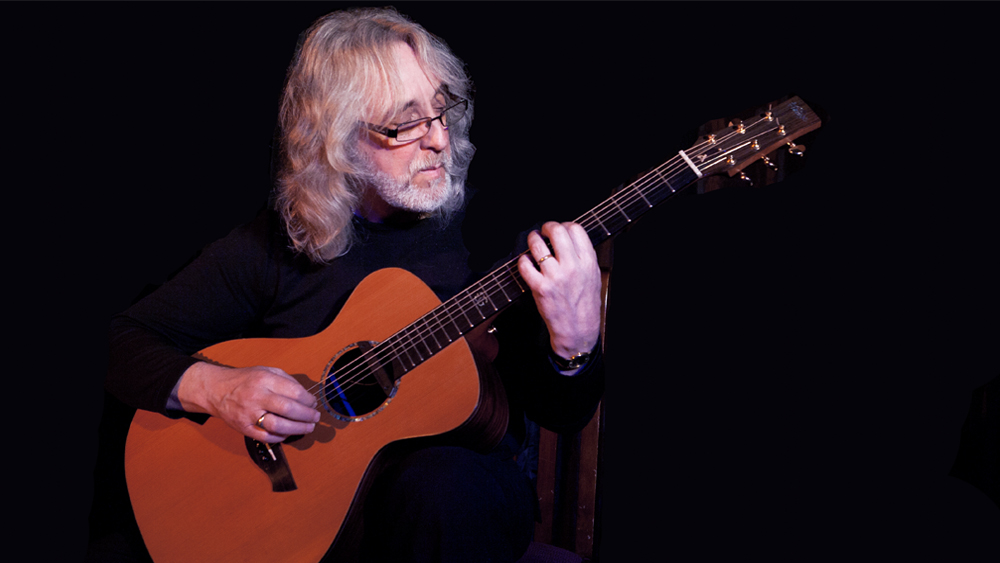 ‘In all honesty, I'm still stunned by it all and can't quite believe it,’ says Gordon Giltrap of his recent appointment as an MBE. Here, the guitarist and composer reflects on his career and achievements.

‘In all honesty, I'm still stunned by it all and can't quite believe it,’ says guitarist and composer Gordon Giltrap of his recent appointment as an MBE.

Gordon was recognised in the 2019 Queen’s New Year’s Honours List for services to music and to charity.

Since beginning his music career in the sixties, alongside contemporaries like Bert Jansch and John Renbourn, his work has seen him become one of the most revered guitarists of his generation.

Despite having never been formally trained, he has drawn praise from fellow musicians like Marillion’s Steve Rothery and Deep Purple’s Ritchie Blackmore.

In conjunction with his own work Gordon has also spent a great deal of time sharing his knowledge and passion with budding guitarists via workshops, columns, and as a member of the Registry of Guitar Tutors.

From his own influences through to teaching others, he shares his thoughts on his career thus far…

How did it feel to be recognised with an MBE in the New Year’s Honours?

This sort of thing happens to other people, not to me! Our dear friend Carrie Martin the brilliant singer/songwriter/guitarist from Hull, unbeknown to us, had been working tirelessly behind the scenes for nearly three years to try and make this happen.

She was even more stunned by the news than us, not really thinking it would go through and be accepted by the powers that be.

What do you consider to be your biggest achievement so far?

It has to be the MBE. My parents and my late son Jamie, who became a legendary and creative force within the Drum and Bass genre, I know would have been so proud.

Who or what has influenced you most along the way?

My biggest influence has to be my wife Hilary who has steadfastly supported and encouraged me through thick and thin. It was she who introduced me to the work of the Pre Raphaelites, which in turn inspired I think some of my best work culminating in The Last of England album created with Paul Ward. It came out over a year ago and somehow completed the circle of music inspired by the visual arts that started with my Visionary album in 1976 – inspired by William Blake – and the Peacock Party album of 1981 – by the late Alan Aldridge.

In terms of musical influences, it started with Hank Marvin then the Beatles, followed by Pete Townshend, Donovan, Bert Jansch and John Renbourn. Of course, the great Bream and Williams are in there because they truly set the bar for guitar excellence. As far as classical composers are concerned, it has to be Elgar and Vaughan Williams. I just love English music and great melodies that have a deep spiritual energy to them; music that touches the soul.

You’ve worked with a lot of notable artists throughout your career, is there anybody you would still like to collaborate with?

There truly is only one and that has to be Pete Townshend, not just because he is cited as an influence on the way I play the guitar, but the power and eloquence of his creativity. He really is a towering genius within the annals of rock music and for me The Who were and still are the greatest rock band EVER. I had the great pleasure of meeting Pete for the first time in 2017 and a more gracious and generous man you couldn't wish to be with.

When I was going through serious health problems, he gifted me one of his Gibson J200 signature guitars, and we hadn't even met at that time. Brian May did a similar thing to help raise my spirits. I shall never forget both those acts of kindness.

Steve Pilkington released a biography of your life last year; did it lead you to reflect on your career?

Not only my career but my whole life. I was astonished at how much I could remember in all honesty.

You’re often referred to as a ‘musician’s musician’ – is that a description you recognise?

The great Bill Leader who produced my first albums back in the day for Transatlantic records used a very similar term in his sleeve notes saying that I would probably become a guitarists’ guitarist. And to a degree he was right, although I like to think that my music appeals to guitarists and non-guitarists alike.

I love it when non-guitarists are moved by my music, especially women who have been dragged along by their guitar playing husbands only to be pleasantly surprised that they love the music as much as their guitar picking partners.

There have been occasions when ladies have come up to me after concerts to tell me they were moved to tears by some of these tunes of mine – particularly 'The Dodo's Dream,' where I embark on a musical journey using a loop pedal to slowly create an almost symphonic musical canvas as the piece builds up to an overdriven guitar crescendo.

You’re a member of the Registry of Guitar Tutors (RTG), what’s the most important piece of advice you would give to guitarists?

I often quote the late great Wes Montgomery who urged players to, ‘exploit their limitations.' When you think about it, this is quite a profound statement. For creative guitarists, I have always urged them to listen to anything other than guitarists. I was given similar advice by Bill Leader; when I was eighteen, he suggested I listen to the Harpsichord and the works of Domenico Scarlatti. I'm sure that's probably why my guitar style can sound at times like the Harpsichord.

Teaching and passing on knowledge is something that has been close to my heart for many years. I have taught in schools, conducted guitar workshops, written columns for various guitar publications, and as already mentioned, have a strong association with the RGT. I was asked to be a patron quite a few years ago. They are bringing out a book of my pieces under the umbrella of The London College of Music. As a self-taught, non-academic musician I'm honoured to now become ‘legit’ within the hallowed portals of the college with this new publication entitled GRADED GILTRAP. The title itself just makes me smile.

In recent times I have been running SHARING DAYS near my home in Sutton Coldfield, and my teaching weekends in nice locations around the country. Another new venture is our Guitar Development Weekends, where we show guitarists how to create their own music. I firmly believe that anyone with the desire to do their own thing can. This is where I come in with the help of that fine player/composer Will McNicol to lend a guiding hand. The job of any teacher is to hopefully inspire. I Like to think in my own way I have achieved that over the years.

Do you attribute your guitar prowess to innate talent, or is it primarily hard work that has got you to that level?

Both! I think that anyone with a gift has to work at it, none more so than I. Believe it or not, in the early days I would regularly practise for at least twelve hours a day which is all well and good, but it did to a degree impact on any social interaction.

You’ve worked across several genres is there one that you hold most dear?

Yes, I have, whether it be Folk with Rick Sanders of Fairport Convention, Celtic and Prog Rock with those early concept albums. My work with Rick Wakeman and his son Oliver, and even jazz during a brief spell with Martin Taylor, but I was never a jazz musician! These days I guess I'm a mix of classical and Celtic with my Prog Rock roots in between. Both Celtic and classical music lift my spirits.

I'm working on material for another album with Paul Ward, and with Carrie Martin on her albums and sharing the stage with her at various intimate venues. I also enjoying working with my friend Nicholas Hooper (Harry Potter), the award-winning film composer, in our guitar duo - we are occasionally joined by his wife Judith on violin. I am always composing.
Features