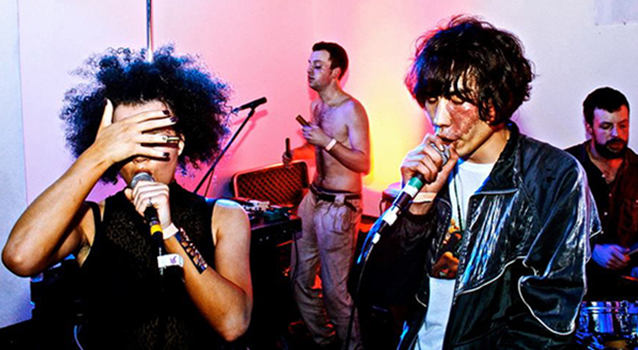 Meet the Glaswegian six-piece who are aptly named after a vociferous strain of mind-melting psychedelic mushroom...

Glaswegian six-piece Golden Teacher are named after a vociferous strain of psychedelic mushroom – an apt moniker for a band who excel at melting minds and expanding ears.

Throwing off the shackles of computer-generated electronic presets and automated syncopation, theirs is an idiosyncratic groove that takes in flavours of Arthur Russell, recent collaborator Dennis Bovell and the earthy techno of Voices from the Lake.

With no rules or restrictions, they’re as at home with the polyrhythms of Ghana as they are the gritty electronic beats of their native Glasgow.

Masters of improvisation, they play completely live and outside the box, tapping into the crowd’s primal urge to dance.

Now signed to the Optimo label – having pricked the ears of JD Twitch with their hedonistic live shows – they’ve committed their expansive sound to vinyl in a series of bone-rattling releases.

Fresh from a year of incendiary gigs, we chat to Cassie from the band to learn more about their weird and wonky sound and hear what’s in store for 2016…

You all met at the Green Door Studio – how did your experiences there influence your sound?
I guess the fact that we all met there and didn't know what kind of music we were going to make was the biggest influence as there was the potential there for it be anything, we never went in to the studio with a set idea. That's the kind of freedom that is encouraged in Green Door.

What attracted you to analogue equipment in the first place?
It's better! Richer, warmer sounds.

Would you say you are a live band that makes records or a recording project that plays live?
Well there are a lot of us in the band, most of will probably have different views on this. I suppose we are both in a sense as we make such a variation of music. It's never one style and the tracks were born out of different recording projects, that in turn were released as records and that we play live and recreate, replicate and reproduce with a different energy.

Is it important that your music is semi-improvised or is that just a by-product of your methods?
I think it's something that's important to us. We've tried working more traditionally with verses and a chorus, that kind of thing but it turns out it's not as much fun as improvising. Of course after we've learned how to play what we originally improvised in the recording it's no longer entirely improvised but that loose original element is something we like to keep. Then we can improve it with the more 'traditional' elements such as key changes (now and then). It's also a good way to keep the sets fresh as you never really know how it's going to sound on the day.

What makes for a really good Golden Teacher gig?
A really good gig for us is making sure we've eaten a lot of food before playing (the ultimate source of power for the band) and coming on stage to a packed crowd with familiar faces -and new ones -who want to have a fun night. The balance is to not over eat, which has happened to me several times - it's a fine line!

A lot of you have done other things in music and played with other bands – how does GT differ from your other musical exploits?
Most of us are involved in other projects. Richard makes music with Dam Mantle as General Ludd. He also makes music with Laurie in another group Modern Institute with several other people. Laurie and Ollie form part of Dick 50 with other pals and musicians. Sam raps in the collective Free Food and Charlie is always involved in DIY film festivals in Paris. These processes are all quite different from GT. I make music with my friend Alicia as LAPS as well, that differs from GT as we've not yet played live. That's something we're re really looking forward to in the new year. However there are similarities as well, in that everything we have recorded has come from improvising. We also recorded our EP at Green Door.

What was it like to work with Dennis Bovell? How did it come about?
We never actually met the Dub Master, but Keith from Optimo heard he was in town for a while and would he be up for swinging by Green Door to add his magic and rework some of our recordings. It was an exciting surprise to hear it all when it was done, they're some of my favourite GT tracks.

You’ve been involved in the Youth Stand Up project and album – what was that like?
It's been a really fun experience being able to make recordings with other musicians in Ghana and Belize and to have the opportunity to go to Ghana and meet everyone involved over there. I'm really happy about it and I think its great that the album Youth Stand Up is so varied. Everyone worked so hard on it. It's a special thing to see it come together like that.

What do you look for in other people’s music? What are you listening to at the moment?
At the minute I like listening to music that is melancholic in some way. Music that moves you in an opposite way to dance music. Hamlet Gonashvili, a Georgian singer whose stuff Oliver introduced me to. Other artists and albums I'm listening to just now are Gloria Ann Taylor Love is a Hurtin' Thing, Japanese album Utakata No Hibi by Mariah and Qareeb, an album by a British-Asian singer Najama. They're all amazing vocalists.

What’s next for the band?
Next for us is having a wee break from playing live so we have more time for other musical endeavours and projects.

Watch our video of Golden Teacher soundchecking for their recent gig at Birthdays, London: http://www.m-magazine.co.uk/watchlisten/watch/in-session-golden-teacher/

https://soundcloud.com/goldenteacher
Features
Back to top