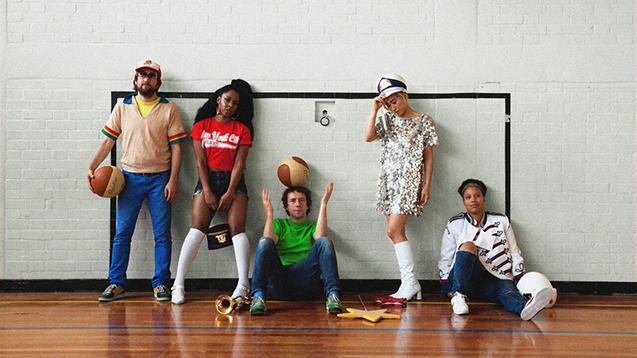 'I think subconsciously I was imagining a trippy, fucked-up technicolour kinda community project with lots of brass' - Ian Parton on The Go! Team's kaleidoscopic new record...

Big, bold and gloriously boisterous: The Go! Team are back with a stomper of a fifth album exploding with kaleidoscopic sonics and girl group melodrama.

Conceived by bandleader Ian Parton as a 'trippy, fucked-up technicolour kinda community project with lots of brass,' Semicircle comes nearly a decade and a half since the collective's first full-length, Thunder, Lightning, Strike burst onto indie clubnight playlists with an adrenalin-heavy shot of fun.

Since then, members have come and gone but the ethos has stayed the same – all you need is a catchy chant and plenty of heart and soul to make a killer tune.

While 2015's The Scene Between was essentially a solo project following the dissolution of the previous Go! Team lineup, Semicircle finds Ian collaborating again with original members Sam Dook (guitar) and rapper Ninja, along with a cast of musicians and guests including Amber Arcades and the Detroit Youth Choir.

Simulating the despair of The Flirtations' northern soul classic Nothing But a Heartache and the teenage drama of The Shangri-Las, album opener Mayday is a a Morse code-inspired number that sets the tone for the record's giddy ride through sixties motifs.

Accompanied by a marching band – mic’d up and recorded from a distance to add to the gymnasium feel – the record's resulting sound is joyful, celebratory and certain to be a whole lot of fun live.

We caught up with Ian ahead of the band's forthcoming UK tour to find out the how it all came together and what he's learned over the course of five albums...


Semicircle reunites original members and brings in more musicians – how do you work as part of a collective?

Well I've always written the songs but once it's kinda locked down, I get on the hotline to the rest of the band and they come along and record their instrument. So Sam does guitar, Simone is a great drummer, Maki and Ninja do vocals. They’re better musicians than I am - I struggle with bar chords. We’ve never written songs by jamming in a room. The only way I know to do it is just to collect ideas over years and jump on the best ones and then build them outwards.

How did the album come together? What was the general mood/theme when approaching the songs?

I think subconsciously I was imagining a trippy, fucked-up technicolour kinda community project with lots of brass and stuff like glockenspiels, steel drums simultaneously warped. Street corner-y but heartfelt. I’m normally looking for something quite 'channel hoppy', so across the album, the voices and the feel is jumping around but it should all sound Go Team-y. That's a big thing for me that bands should have their own unique thing going on.

Mayday is getting lots of love on BBC Radio 6 Music and has some definite girl group melodrama vibes. How did the Morse code idea for the lyrics come about?

It was one of those nice things where a lyrical idea – a love emergency – came together with a musical one: realising that a Morse code could work off the top of a brass line. I was thinking about what emergency words there were. S.O.S had already been done! But when I thought about 'mayday', I was surprised it had never been done before. And then I realised it worked spelling out the letters over the intro drum beat. So it was kinda like a puzzle slotting together. The spoken word bit is pure Mary Weiss from The Shangri Las.

You’re playing your first show in three years in February – how has it felt having that break from playing live?

I've never particularly had a break from music – I don’t remember a time when I said I'm not doing music at the moment. I'm always switched on to it. My ears prick up if I hear something and I run and sing into my phone. I guess just the way I work is SLOW. I hoard and build things up in layers over time. There's always been a four year gap between albums but this time it's three years so maybe I'm getting my ass into gear.

Over five albums, what have you learnt about yourself as a musician and what keeps you motivated to keep writing and releasing?

I love how music is a never-ending quest. You can never say you’ve nailed it – it's always slightly out of reach. So I think, particularly with the idea of mixing genres within the same song, there is so much further to go with that idea.

I think it's possible to get more extreme and 'schizo' with song writing – and I still feel The Go! Team is a kinda unique thing. I can't really think of anyone that sounds like us. And I have a backlog of ideas.

Is there anything different you're doing now to when you first started?

I think I'm a lot hotter on melody and am interested more in singing than the earlier albums. I used to buy loads of records but the internet is amazing for listening to loads of obscure shit. The early stages of albums normally involve me listening to thousands of records a week – not just to look out for any samples (we don’t use as many samples as people think) but to spark ideas for me.

What one piece of advice would you give to musicians starting out?

Don’t just write songs – take an angle. I think the aesthetic things about a band are more important than being able to play amazingly. For me, a band is a particular way of seeing the world. So I’d say less shredding, more angle.

Mainly touring and whoring ourselves round the world.

Semicircles is out now via Memphis Industries.

Tickets are on sale now from www.thegoteam.co.uk.
Features