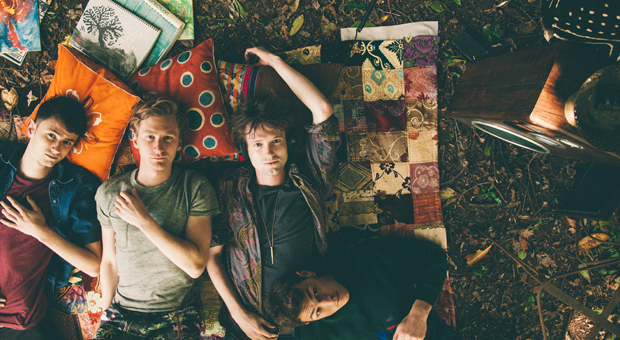 If air miles are a barometer of success, then Oxford four piece Glass Animals could be one of the biggest bands in the world right now.

Since the release of their 2014 debut album, Zaba, a slinky collection of psychedelic, R&B infused guitar pop, they’ve zig zagged all over the globe, relentlessly gigging in the states, UK and down under to ever increasing crowds.

Initially getting together in Oxford, the band were the first act to sign to Wolf Tones, the label run by producer extraordinaire Paul Epworth. While this got well connected tongues wagging, it’s the quality of their hypnotic, striking songs such as Gooey and Pools that have cemented their status as one of the best new British groups out there. Frontman Dave Bayley tells us just how they’ve gone from ‘ones-to-watch’ to an increasingly big deal…

As a kid I listened to my dad’s vinyl - I was intrigued by this weird machine that played these discs. I used to play with it all the time and for some reason became addicted to The White Album, especially Back in the USSR - that was a big song for me. It’s a great combination of pop and experimentation.

When did you start making your own music?

I was given a guitar when I was about 15, started mucking around playing chords. I didn’t write anything until I went to university and started tinkering away with a laptop which had Garageband on it.

At uni I used to have trouble sleeping so to help me sleep I used to listen to music, quite dreamy type stuff. I started DJing too for money on the side. Both those things made me want to start writing. I was playing that post-dubstep style of dance music - like Joy Orbison, the dancier side of Mount Kimbie.

How did Glass Animals get together?

We’ve been friends for a long time since we were about 13. My first friend at school was Drew, who is now our guitarist. He introduced me to Joe and Ed, our drummer and bassist. We were the kids at school who didn’t really like school but really liked sneaking out to go and see an instore, and watch a gig. We just went and did all these music things together, watching all our favourite bands at the local club. I came back from uni, played them some music I’d done and they convinced me to put it online.

What was the big break for Glass Animals?

There have been a few landmark events in our musical career so far. Perhaps the funniest was when Ed went to buy a new bass in LA where we were doing a little show. He went into this massive guitar centre and there was a kid in the corner playing with a bass. Ed was looking at other instruments and this kid started playing one of our songs. Ed was like ‘what the fuck?' He introduced himself and taught this little kid how to play the bass line properly. It was pretty surreal.

How does the creative process work with the band?

Normally it’s a progression from something I start. We begin with vocal lines or chords - it normally comes pretty quickly with some soundscaping and ideas, then I’ll sketch out drums and basslines. I’ll bring a skeleton to the band, who are much better instrumentalists than I am and they'll work their magic. Gooey was a bit different. I’ve got a folder of little beats trying to find something for this other act but I started playing the Gooey beat - just drums, bass, bassline and some xylophone over the top. As soon as I started listening to it, the chords came immediately, then the lyrics and vocal line.

What were you hoping to achieve with Zaba?

We wanted to create a whole record you could enjoy from start to finish rather than just a collection of singles. Something which would gel together as a piece of art and that came through to the album artwork and stage design. It’s all meant to be very cohesive, something you could put on and listen to from start to finish and take you on a little holiday away from the mundane.

I’m listening to a lot of older music lately, a lot of Beastie Boys, D’Angelo, Can and Tom Waits. Raindogs has really come back into my life this last month.

You’ve recently announced a large number of tour dates - how important is playing live to your band?

Live shows are incredibly important. It’s a huge opportunity to show people what you and your songs are made of and give all your songs a new lease of life. These live shows are people recreating their records perfectly and I think that’s a bit sad. It should be more about showing people that you’ve got even more ideas.

What have been the best recent gigs?

We’ve had so many really great shows. We played some amazing gigs in Australia, partly to do with the size of the crowd, but then we’ve played some really tiny shows such as one in Salt Lake City in Utah. We got to the venue, basically in this guy’s garage, he’d sold 300 tickets and had no idea how he was going to fit so many people in there. There was one working speaker, no stage and a bar saying ‘water $1’ – that was all they served. We were worried that no one was going to be into this but show time came and people were hanging from the ceiling, standing on top of things outside trying to peer in through the windows. People lost their shit and it was amazing.

Are you surprised that audiences outside the UK have responded to your music with such enthusiasm?

It is quite weird. I never saw beyond our shores. It’s difficult to comprehend that there is an audience outside England. There are cultural differences, not massive, but ones which are subtle enough to have an impact and to make you think it wouldn’t come across.

Have you got any advice to new artists?

Don’t over think anything while making music. You should always go with your gut instinct when creating sounds. Just turn the logical part of your brain off and let things flow out.