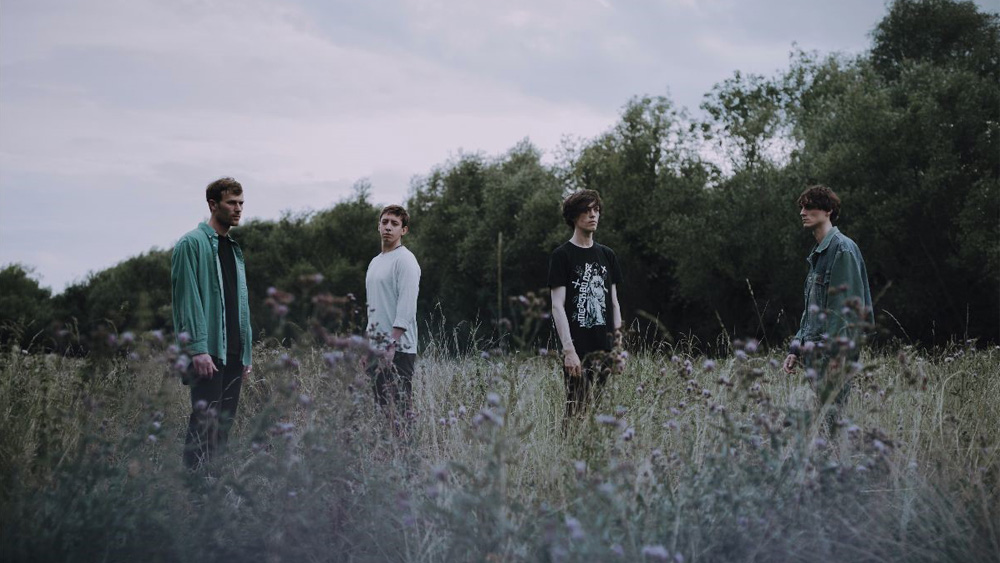 'From a slightly unfortunate set of circumstances we’ve found ourselves in a position to start releasing music,' say Gengahr's Felix Bushe.

'From a slightly unfortunate set of circumstances we’ve found ourselves in a position to start releasing music,' say Gengahr's Felix Bushe.

Felix is referring to their decision to go DIY for their forthcoming album Sanctuary, but he could also easily be touching on the rocky experience they had making their 2018 record Where Wilderness Grows.

Yet against the odds the alt-pop band overcame personal and band-related challenges to make their most ambitious work yet.

Widening out their creative process to include collaborators, and switching up the way they wrote and recorded, led to a reinvigorated experience for the London four-piece and a new-found boldness in their sound.

Ahead of the album's release, we caught up with Felix to get the lowdown on the new record, his thoughts on going DIY, and what Gengahr have in store for 2020...

What’s the thinking behind Sanctuary?

A lot of the album was written around the premise of the longest relationship I was going through at the time. My mother had passed away, and then not too long after that my girlfriend had to leave the UK because her visa ran out. We were doing a long distance [relationship] for over a year and a half. A lot of the songs were written during that period, so I think that was the overbearing theme throughout – that sense of distance and separation.

How do you think that fed into the album musically?

I don’t know really. I think it’s just one of those things where you go through the process of making and writing. These things just happen intuitively. I don’t think there was anything necessarily different about the way I approach writing songs. I just think what the end product is, what comes out, is a reflection of whatever it is you’re going through. It’s intrinsically linked with your own experience.

The main difference between this album and the previous ones was that it was probably a bit more isolated in the creative process. I hadn’t written as much on the computer and on my own before. It was a lot more of a communal writing experience, in the rehearsal room as a band. I think due to the fact that we’d been touring a lot we all just needed a bit of a break. So we did a lot of writing individually, rather than as a group, and then brought those songs together at the end and went into the studio to record.

The recording of your last album wasn’t easy – how was the process this time around?

It was great, to be honest. I really enjoyed the process of it and how it was made. It felt really easy. It went from the stages of how I’d been working on demos and had been sent stuff from other members of the band to work on from home and then we took those files and opened them up in Jack’s studio and then we took those files into another studio and added other bits. It felt quite awesome.

There were bits that stayed in from the original demos and all the way through to the end. It was a case of adding to and embellishing on the ideas that were already there, which felt organic as a process, getting it to a finished point. It took away some of that pressure. There are loads of ways you can record, but the one where you learn the song, go into the studio and everyone plugs in and plays. That pressure is taken out because we’re playing along to backing tracks that are being constructed and we’re working on that as we go.

It’s a very different process and probably not one that traditionally linked with guitar music. It’s certainly not how classic guitar albums have been made in the past. It lends itself to working on the production in more detail. There was a lot more of an under the microscope experience for each part or performance that got added into the track. It was a little more detailed than stuff we’ve done previously.

One of the elements that I’ve taken form the process of making this album is the benefit of collaboration, allowing other people into your world, and how that can really benefit everything. Every aspect has been enhanced by other peoples’ enthusiasm and getting stuck in.

You recorded the record in Cornwall – did that have any impact on how the album developed?

We recorded our first album in Cornwall, and we knew we wanted to do it again. We love recording residentially. The nature of the way touring cycles work is that you always end up recording in the winter, which isn’t a problem when you’re in the studio because you’re inside the whole time.

We really like working with James (Bragg), he recorded and co-produced our first album. We knew what we were gonna get with James, he’s very talented, very enthusiastic. He’s a lovely guy and we thought that would be a really fitting way to tie the old and the new together. We did multiple sessions, finishing off the songs that we’d already been working on, so we went into stuff that we couldn’t achieve in our own bedrooms almost.

What drew you to working with Jack Steadman (Bombay Bicycle Club) again?

We did a one-off single called Atlas Please a while ago and it was a little bit of a conversation thinking about what we’d do next. To be honest, I don’t think were necessarily ready to record an album at this point, but it felt like that was really fun and we wanted to do more.

So, I said, would you be up for doing an album and he was enthusiastic and wanted to do it but on the basis that we started immediately because they had their own album planned and it was all very scheduled with the Bombay stuff. He knew when they were going into the studio so that gave us a definitive timeline of when it needed to be wrapped up.

We started recording songs and working together while I was still finishing the rest of the album. It was challenging but fun. It was kind of nice working to a deadline. It was sink or swim. We embraced that and it worked in our favour in the end.

What was behind the DIY approach to this release?

I think it’s something that we’ll see more and more of. MGMT are self-releasing now. It’s really tough to make this work in all honesty. At the end of touring two records we had all the money that we’d made from playing those festivals and we had an opportunity where there was not going to be resources available to us to go and record the album we wanted to record with the people we wanted to record with unless we paid for it ourselves.

The choice was; you either play yourself for the year’s work you’ve done, or we reinvest in our futures and record another album, and we do it on our own terms. The one thing I’ve found a little frustrating over the years about working with labels is you get given people to work with, especially when you’re with indies who don’t have huge budgets. You’re already starting the compromise almost. It’s not something I realised I minded.

The money is coming from our pockets, so you make sure the decisions you make you’re really happy with. It does give you that sense of power and control, which I think everyone would want to have if they could. From a slightly unfortunate set of circumstances we’ve found ourselves in a position to start releasing music.

We’ve been working with Liberator since day one, we were signed to them before we were signed in the UK to PIAS or Transgressive. I was discussing the idea with Nick, the head of the label, about what we wanted to do, and they said they’d be interested in coming on board as a partner. We deal with all the creative aspects of the release and they deal with the marketing and label side. So, that relationship has been perfect for us. Although we’re working with a relatively small, bespoke team, it allows us to do this release and create a really strong sense of community. It’s a family approach to releasing music.

I’ll be honest, there’s more work than there was before. But I think that it feels worthwhile because you’re so involved with it, so you don’t mind taking that extra responsibility.

How do you think your sound has evolved since your debut?

I feel as incapable as I did at the beginning. Every time I write a new piece of music or work with a new person, I realise how much there still is that I don’t know. I think that process of working more collaboratively and allowing more people to be involved with this album has helped me. It’s a very isolated process, writing music and you do get caught doing the same things. Going forward, it makes me more determined to work with other people and see how other people construct and write music because that’s the only way to constantly be learning and constantly improving the music you make yourself.

We create our own playlist on Spotify, which I enjoy. We update it every two weeks at the moment. I like the new Michael Kiwanuka record, that sounds really good. Alice Boman, Nada Surf, Julien Baker. Lots of cool stuff. One of the perks of making music is that you’re always looking for other peoples’ music to listen to.

We’re planning the next year now. We’ve scheduled everything up until March and a few festivals for the summer. After that, I don’t know where we are gonna be exactly. A lot of it is determined on how the response to the album goes, which we hope is received well. We’ve released three albums now, so are a little bit more pragmatic, or sceptical of the way things are going to move. We still have other jobs and we focus as much as we can on doing music. It’s an exciting point at this stage where there’s been lots of positive support, support we haven’t had on previous records. Radio 1 are getting a lot more on board with this single so far, so we’ll have to see what happens really [laughs].