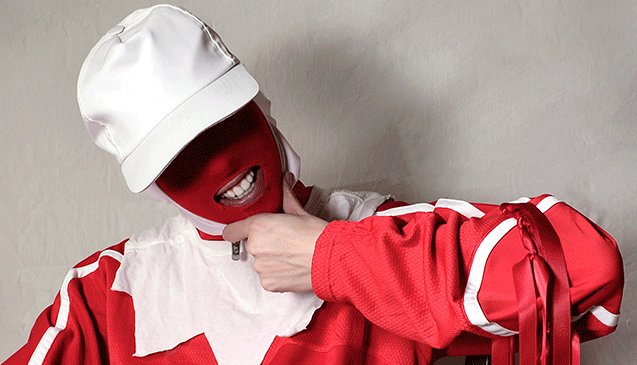 ‘I developed Gazelle Twin in response to feeling jaded and frustrated by the music industry': electronic ace Elizabeth Bernholz on the thinking behind her oblique alter ego...

‘Making a statement was the reason I developed Gazelle Twin as a concept-led performance project in the first place,’ says Elizabeth Bernholz of her lucid alter ego.

Through her radical performances and three oblique albums, Gazelle Twin has consistently challenged the status quo both within the musical sphere and across a wider social context.

The only constants have been Elizabeth’s music and outward persona, which are freeform and tactile, often obscuring her vocal and physical identity.

‘It was in response to feeling jaded, frustrated and largely insulted by various experiences in the music industry from the classical traditional world to the gig-going world,’ she continues. ‘I kept hitting walls of tradition and stale protocol which did nothing to inspire me to join in with it.’

It’s been this outsider status that has freed her up to plumb the breadths and depths of music-making and identity, reflecting back her findings from the fringe.

Latest album, Pastoral, which explores the English idiom against a backdrop of Brexit and the rise of populism, finds Elizabeth at her most dystopian, with mangled samples and fragmented cultural idents punctuating the railing scorn.

Ahead of her anticipated London performances at Somerset House (16 November) and with the NYX Drone Choir at Pickle Factory (9 December), she considers her creativity in a climate of political and social upheaval…

What's the thinking behind your latest LP Pastoral?

It was written during, and in response to, moving county, from a city life to a rural one, and then exploring what it really means to be ‘English’ in the current socio-political climate. I was thinking a lot about how most of the more unpleasant aspects of English history are conveniently transformed into nostalgic cliches. The current rise in toxic nationalism and extreme patriotism that we are witnessing emerge in the UK, parts of the EU and in the US, were heavily on my mind.

Where and when was the album recorded?

In my current home, during the last four years. My son was born in May 2016, so the process from that point became very gradual and somewhat frantic at the same time.

You incorporated so many layers of sound and instrumentation into it – what was driving that experimentation?

With every album I make, I always build up a kind of a ‘palette’ that unifies the theme and mood, it tends to change quite dramatically for each project. I like to make sure there is counterpoint and balance within that palette, for example, since I record and produce all my music on a computer in Ableton Live, I like to contrast the digital elements with plenty of ‘homemade’ samples, real percussion, real instruments, field recordings etc.

On my last album, Unflesh, I was going for sparse production, using mostly sounds made with my voice, mouth and body and analogue synths, but on Pastoral the scope was much wider. I was thinking a lot about historical instrumentation, classic folk instruments like the recorder, tambourines, bells etc as well as period instruments of the royal court like the Harpsichord. The singing styles vary throughout, and the electronic production keeps it within a contemporary context.

What else was influencing and inspiring you most during that time?

The majority of the album was written during in the two-year period of becoming a parent for the first time and raising a child. Adjusting to a completely new way of living - the madness and anxiety of becoming responsible for another person - and all this infused with the political uncertainty and insecurity I was beginning to recognise happening all around me.

How do you think your sound has evolved since Unflesh?

There are aspects of Unflesh that I knew I wanted to retain in my production and performance style, such as the spoken word, which I now feel is quite a natural part of what I do and might well stick around longer than I imagined. I feel like it’s a good contrast to melodic, sung passages which I can sometimes tire of if there's too much of it, personally.

With Pastoral I knew I wanted there to be a warped sense of historical themes/styles driving the music, coming from a very specific place and giving a feel to the music which at the same time remained uncanny - familiar, but strangely unfamiliar. There's definitely more going on with Pastoral, it's quite frantic, jumbled, noisy, and multiple-personalities, but that's a direct reflection of the theme I was getting at with it.

How important is it for you to make a statement with your music?

Making a statement was kind of the reason I developed Gazelle Twin as a concept-led performance project in the first place. It was in response to feeling jaded, frustrated and largely insulted by various experiences in the music industry from the classical traditional world to the gig-going world. I kept hitting walls of tradition and stale protocol which did nothing to inspire me to join in with it. I wanted to rebel and address how/why and for whom I was making, releasing and performing music, to try to reach a point that felt more poignant and urgent. That was the initial drive, so the subject matter of the actual ‘products’ of this, the albums themselves, are naturally quite loaded too. With that said, it takes me a while to grow an idea into a full-length album, as it kind of has to be lived to be made.

Several years down the road, this approach to creating music has become a bit of a lifeline for me. If it ever stops being that, then I'll pack it in and take a break or do something else.

How do you go about translating your studio sound on stage?

With the simplest means possible, which is partly for convenience and keeping costs down, but also in order to focus all attention on the things that matter - the performance. My voice takes precedence over most of the production, so I like to keep that as raw and live as possible.

The physical performance is also central to the live adaptation, in some ways I believe this is more important than recreating all aspects of the music completely live, or what some might deem as ‘authentically’. My husband Jez, who is a musician and producer in his own right (Bernholz/Near Future) performs all the electronic samples and beats, and I use a vocal pedal to generate the effects for my vocals and recorder. It works really well on large or small scales, which is perfect for the types of venues and festivals we tend to play.

What's in store for your collab with NYX?

It’s a really wonderful, exciting collaboration which is still cooking. It takes the DNA of Pastoral and transforms it into something purely vocal. The performances will not be anything like the Pastoral live shows I am doing right now - the choir and I will act as a chorus, working and moving together. The arrangements have been done by Sian O’Gorman and so far, are absolutely mind-bending; the singers are incredibly versatile. With choral music acting as my bedrock of most of my compositional output, it’ll be a bit of a dream come true for me.

Working on new commissions and other projects, trying to look beyond Pastoral to keep up with myself. Also, my two-and-a-half-year-old-son, and his ever-widening world which I adore exploring with him.