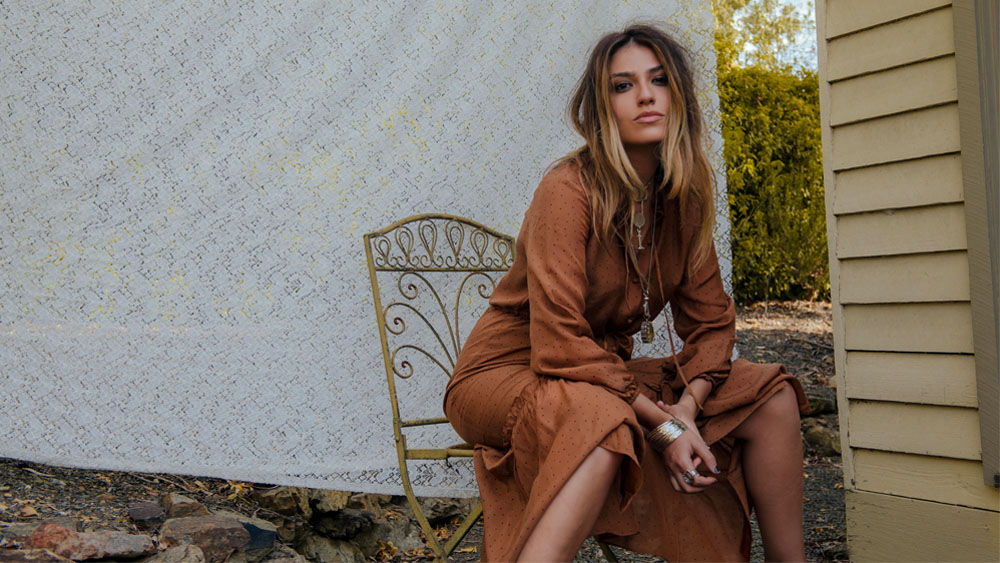 ‘If I had the opportunity to go back, I would have loved to have focused on and understood who I wanted to be as an artist before other people got involved’: after finding fame at just 17, Gabriella Cilmi is finally finding her voice.

‘If I had the opportunity to go back, I would have loved to have focused on and understood who I wanted to be as an artist before other people got involved’: reflects singer-songwriter Gabriella Cilmi.

Her career kicked off when she was just 17 following the huge success of the single Sweet About Me, taken from her 2008 debut album Lessons to Be Learned.

In the intervening years she put out two further long players; 2010’s Ten and 2013’s The Sting.

Early in 2019 Gabriella made a return with the country-tinged Ruins, taken from her forthcoming EP The Water.

The title track was subsequently released in August and its stripped-back blues tones suggest she is fully pursuing who she wants to be as an artist.

Ahead of the EP’s release and two London shows, we caught up with Gabriella to chat about those early years, collaborating with her brother and how her music has evolved…

You started your career at a really young age, how did you first get into making music?

It kind of just started as a hobby. I started off playing piano and had a bit of a bad experience when my piano teacher told me I had no musicality. I was a bit devastated. But I stared singing after school, and I’d play with some mates. We played Jet covers and Led Zeppelin covers in one of the boy’s garage.

I got spotted after I performed on this TV show called Good Friday Appeal, which happens every Easter in Australia. I was really young; I think I was like 10 at the time. That got people talking, and it started really, really, early.

Did you find it hard to navigate the music industry at such a young age?

Looking back on it, I didn’t expect that there was another side to it. I thought I would just be performing all the time and playing gigs and then you realise you have to do interviews and smile at the camera – all this other stuff. To be honest I don’t think I was prepared for it mentally, the amount of work, constantly travelling, really early mornings. It was a lot for a young girl.

I got signed in Australia and then they signed the rest of the world to Island records, so on my school holidays I would come to England and write and then go back to school. So, when I was 16 was when it all started happening.

It was pretty exciting at times. I got to meet Robert Plant at one event, which was my life made [laughs]. That was the really cool side of it and obviously being able to perform with great musicians. But there were some more challenging aspects.

What’s the thinking behind your forthcoming EP The Water?

I started writing it about one-and-a-half years ago now. It took me a while from my last record to figure out what direction I wanted to go in. I knew that I really wanted to take things back to basics and realise why I fell in love with music in the first place.

I went back and listened to a lot of my favourite records for inspiration – Janice Joplin, Me & Bobbie McGee is one of my favourite songs. That was a big influence. And then I started listening to a lot of Gram Parson and Emmylou Harris, delving into the Americana side of things that I’d always been interested in since a friend of mine gave me a Flying Burrito Bros. album.

I’d always thought that I would end up making a country-esque sounding record. It wasn’t until now that it felt like the right time. What interests me about that side of music is the songwriting and how the music was written so simply on guitar, piano. It was just focusing on the lyrics and the melody.

We recorded ideas in my kitchen, bedroom and on my mobile phone without trying to record it and get bogged down with the sound of things. There’s loads of ideas on my mobile still. That’s probably the only piece of modern equipment we used. All the files on my computer that I put ideas in are called skeletons, so they’re just the skeletons of the song.

How would you describe it?

I would say, for me, it’s a fusion of all the things that I love and genres of music – soul, country and there’re even gospel influences on there. It’s was a cathartic experience writing the record because there was a lot of self-restraint on my side. Whereas when I was younger, I would go into the studio and do a thousand takes and work on a particular sound or synth part.

But [on this record] a lot of my vocals were done in one take and there was no recording guitar takes a thousand times. We recorded the skeleton of it, me and my brother, and at the same time get the vocal and acoustic down and then build up the track from there.

My favourite part of what I do is performing live and I wanted to have that live feeling come across in the record and try and capture that spontaneity of a live performance without it being a live record.

It depends on what day it is [laughs]. Some days I get inspiration and I can just write a song and other days you can sit down with a guitar, or if I’m writing with someone, and I just won’t. I’ll get nothing. So, it really just depends.

I actually tend to write better when the weather’s bad, so maybe today if I sat down to write a song, I would get nothing down. But when it’s like gloomy and grey outside I think I don’t get distracted so much.

How did collaborating with your brother impact the EP?

He was a lot harder on me than other people I know. Because he’s my brother and siblings have that relationship where they test each other a bit. I think it’s good to have that, it kind of pushes you to your limit. When we started writing together we used to have big rows, but we’ve settled into a rhythm now that seems to work for us. He’s a really good multi-instrumentalist and I focus on the lyrics and melody, but our roles are interchangeable. Sometimes I’ll jump on the guitar and he’ll work on some lyrics. It’s nice to have that freedom to bounce off one another.

How do you think your music has evolved since your debut record?

I feel like the music and the records that I’m making now are kind of a continuation of that first record, in a sense. It’s quite funny, I did come from that place when I was younger, obviously jamming with my mates after school. I feel really comfortable in that environment of the band and the camaraderie between musicians.

There was a period of time in between where I’d made records and didn’t feel 100 percent from the world that I’m comfortable in. So, I just feel really happy with the space that I’ve created now. Hopefully, I can push that forward and really home in on the style of it and try and get better and better. There’s always room for improvement [laughs].

Work with people that you really respect and love their work. If I had the opportunity to go back, I would have loved to have focused on and understood who I wanted to be as an artist before other people got involved. To really take ownership and have a clear vision of the direction that you want.

These days it’s even more important that you have created that world for yourself and you have more of an understanding of who you want to be as an artist. A lot of people are self-releasing these days and its more hands on, especially from when I started. I think there was only MySpace when I started out, and even that was kind of new around then.

Following a sell out at St Pancras Old Church in November, you recently announced a show at the Oslo for 2020 what can we expect?

I’m just putting it together now, but it’s going to be really exciting, hopefully, especially being in a church. It’s a perfect place for the first gig to showcase the EP. Maybe it comes from growing up in a Catholic girls’ school and being made to sing hymns every morning. I’m really inspired by that type of music, so there’s a gospel and soul undertone to the whole thing. Hopefully I’ll have some gospel singers come in and some really great musicians. I’m hoping it will have ‘a bit like going to church’ kind of vibe.

I’ve seen a few gigs at St Pancras Old Church, and other churches as well, and it seems the audience seem to be a little bit more at ease. There’s not that hum of people talking, there’s more of a reverence.

I’m writing at the moment. I’ve hopefully got enough for an album. I’m finishing off those songs and then hopefully take the tour on the road. I’d love to travel more around the UK, get into Europe and obviously Australia.

The Water EP will be released on 1 November via Kin Records.