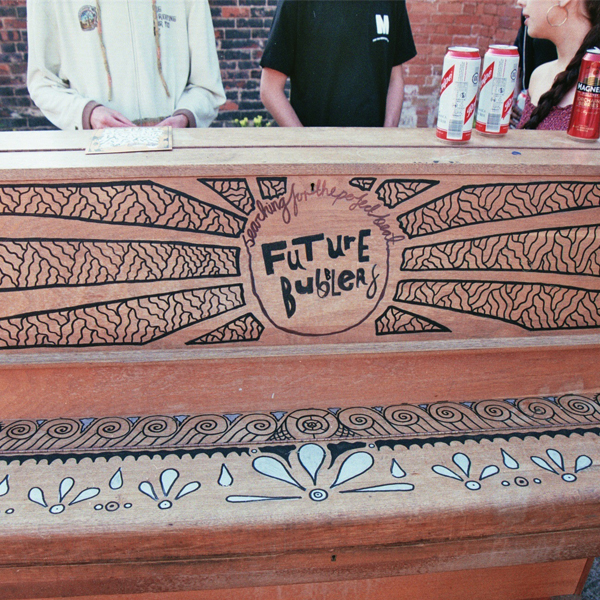 Earlier in the year Brownswood and Gilles Peterson launched Future Bubblers, a three year music discovery programme aimed at mentoring the next generation of songwriting talent.

Searching for the Perfect Beat: Future Bubblers looks to dig in at grassroots level to find and mentor the best new artists. Choosing Nottingham and Salford as their bases for the first year, the initiative attracted almost 300 applicants for its first wave.

With an announcement about next steps imminent, we caught up with the the Brownswood/Future Bubblers team to find out more and learn their top tips for emerging artists wanting to break through in 2015...

What inspired the Future Bubblers project?

It felt like a natural evolution of Brownswood Music and Gilles Peterson Worldwide. As a company we cover all music industry bases - label, publishing, events, management - and it was just an amazing opportunity to collaborate with the Arts Council England (ACE) and take some more authentic artist development time, which is so rare nowadays. It also brings all these strands together to deliver a genuine music industry learning experience for the candidates that come through.

With ACE support we’re in an incredibly lucky position to be able take our time to mentor some amazing music talent, and to dig for this potential. To be active in encouraging young people to apply and consider themselves eligible was a unique angle for Future Bubblers.

Why have the locations of Salford and Nottingham been chosen?

The development of Future Bubblers has really highlighted the importance of subcultures, and how these allow music movements and musicians to thrive. Music needs appreciation. So our decision to make Salford and Nottingham our focus cities accompanied the fact that we already knew there were burgeoning scenes for this music in those cities.

In galvanising the current scene, we would not only reach the innovative music makers we were looking for, but also deepen its foundations.

It was a real balancing act, because we had to have some people that knew the musical culture of their city from a similar Brownswood/Gilles vibe, but also somewhere that would benefit from our presence. We found the cities that made the most sense were those that were otherwise overshadowed by slightly larger cities nearby - so Nottingham, with Birmingham, and Salford, Manchester etc.

What are the biggest barriers that new artists need to overcome?

It's a mixture of two - there’s practical things like money, resources, access to contacts and industry players. But it’s also about self-confidence and self-assurance. The image that to have 'made it' equals money and fame means a lot of new artists feel a tendency to imitate rather than innovate. But we really want to highlight the importance of being authentically creative. You have to believe it and believe in what you’re doing, or it’s not going to project properly.

What kind of advice would you give to new artists looking to try and make an impact on the current musical scene?

Be brave, bold and take the time to figure out who you are and what you sound like. You don’t have to do it like it’s been done before. Also the amount of money you need to break is totally overplayed. You need money, but as innovative as you are with your music, you need to be with your resources. Look at that Skepta line, a music video with 80 English Pounds - why are people trying to spend £1,000 on their video when they’ve recorded their track in five minutes on their Macbook. Music is the bottom line. And also - you are probably going to fail and falter at some point, but that doesn’t mean what you’re doing isn’t valid.

What are the key things they need to keep in mind when setting out on their musical journey?

It is not about fame and riches. It is about building a solid career and creating opportunities for yourself. Work hard on your strengths. Music industry success is about creating a career that can sustain you and enable you to do what you enjoy.

Do these tips apply across musical genres?

Yes. Music is music at the end of the day - and in a world where we’re so connected across the globe and consume music so quickly genres are becoming less meaningful. Music makers are collaborating more freely, and taking influences from the past and present so much more easily because music is just everywhere now.

What are the best kinds of profile raising opportunities?

It’s a frustrating thing to quote but 'right time, right place' is still an important factor in getting yourself heard. And also linking to the whole authentic journey mantra. Plus in the internet age it’s hard to shake off any miss-aligned collaborations you initially make. Don’t feel rushed into the wrong lane because of money or time pressures. It could haunt you forever on Google searches and YouTube uploads.

How important is an effective network to the success of an artist?

Communication is massive. Making sure you take the time to tune into people that 'get' you and what you’re about is so important. Ultimately when you 'make' it as an artist, there are potentially so many people that are involved in - agent/manager/lawyer/label - and making sure they are all on the same page. Effective network is basically a synonym for communication and understanding. This is why we are taking lots of time to speak to the Future Bubblers candidates to figure out who they are and where they see themselves.

In the current digital music world, there’s plenty of online noise out there which can make it hard for a new act to stand out - how can such an artist cut through this?

This comes back to innovation. There is a saturation point with a certain sound - people are always going to be looking for something fresh and new. It’s exciting and it’s what people gravitate towards. It tends to be the innovators that stand the test of time.

How will Future Bubblers sustain the support in the long-term?

We have been lucky to plug into some very supportive set-ups and organisations in our focus cities. That’s more in a help-in-kind basis - so helping is via access to their supporters and contacts. But on a very realistic level, to expand and reach its true potential, we are very much on the look out for more financial backing. Hopefully as the outcomes of the project start to manifest, some like-minded companies will want to get involved.

What is the hoped for outcome from the Future Bubblers initiative?

When we were doing our initial research, someone said “yep, cool - 2015 will be remembered as the year that Brownswood and Gilles came to Nottingham,” that would be a cool legacy to have! But I think that alongside bringing through some amazingly exciting music makers and giving them support and encouragement, it is really important to have opened up a dialogue around all of the issues.

Future Bubblers touches on loads of social and cultural issues that you sometimes overlook when you just keep music in your mind as a “business’ or an “art”.

Look out for more announcements from Future Bubblers - and keep up-to-date via their website below.

futurebubblers.com
Watch a video about Future Bubblers below...