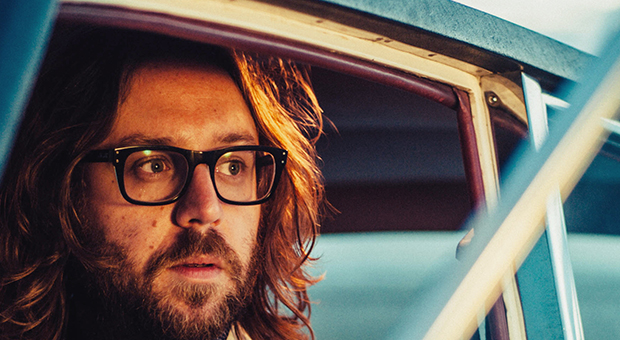 'I’d never been the front man before & lyric-writing was completely new': Fred Abbott on life after Noah and the Whale

Multi-instrumentalist Fred Abbott is probably best known for playing guitar and keyboards in Noah and the Whale, a once little-known indie-folk band from south London that went on to conquer the album charts and spawn the solo career of Laura Marling.

With nine years’ pedigree selling out the likes of the Royal Albert Hall, and with five acclaimed albums under their belts, Noah and the Whale officially announced their split in April.

The statement was quickly followed by revelations of Fred’s first solo venture, the first fruits of which were the spritely pop-rock gem Funny How Good it Feels.

Now with his debut album Serious Poke set for full release on 10 August, we spend some time with Fred to find out how he’s managed to master lyric-writing and become a proper front man…

You’ve made your first solo foray this year – what has that been like?
It’s been really good. It’s been a little bit nerve-wracking too as you can imagine. I never really saw myself as a front man, I’m mainly a guitar player and a keyboardist. That’s what I’m good at and that’s what I’ve always done in bands. I’ve never been the front man before. Writing all the songs has been a new thing for me over the past year. My gig at the Borderline will be the first time I’ve ever stepped up and fronted a band, which is scary and exciting at the same time.

Have you been working with some of the same people from Noah and the Whale on the new stuff?
Yes, so it hasn’t been a million miles away from playing with Noah, but in some ways it was a little bit more fun. We had a good time because we weren’t doing anything to a schedule or even with the idea of releasing it. There was no pressure.

How did the songs on Serious Poke start life and what was the inspiration behind them?
Some of the songs I’ve had for a long time - musical ideas that I’d been playing with in Noah and the Whale. We’ve even recorded some of them in demo sessions for our albums but without words, or maybe different words. The music was there for pretty much all of them but then I had to write the words, which was the hard part. Even after I recorded them I was still writing the words.

How separate is the lyric-writing process from the music-making?
I find writing the music fairly easy as I’ve been doing it for a long time. But writing words is tougher work. You have to rewrite things many times to get things exactly as you want them. And you have to be as economical as possible. The writing process for this record has been over the whole of my life as a musician. Like every first album, it’s a collection of all the songs that have stuck around in my head over the last 15 years.

Can you talk to us more about learning to become a lyricist? What insight have you gleaned from the experience?
It’s been helpful to be around Charlie [Fink, Noah and the Whale front man] who wrote the majority of the words in Noah. He’s a really great lyricist and I saw how his songs developed through many different drafts. He was constantly editing lyrics to songs until he got the maximum potency out of them. I picked up how important it is to craft every line and make every word count. It’s not something that comes naturally to me.

You’ve had a very successful career in Noah and the Whale. Why did you want to make this record?
All that really matters to me is that I’ve created something that I like. I think it’s great. It sounds like all the things I would want out of a rock album from all my favourite acts. I’m happy with it in that sense. All you can do is make something you like and hope that other people will like it too. I certainly haven’t made it in an attempt to please anyone else. But I’m hoping there are likeminded people out there who will get it. Maybe a lot of Noah fans won’t get it, but there might be some classic rock fans who might like it.

Many people say your music sounds like Tom Petty. What do you think about this and are there any other people who’ve influenced your sound?
A lot of people do mention the Tom Petty thing, and I do see why. When I was making this album I was listening to a lot of stuff that maybe isn’t that obvious on there, like The Eagles, Don Henley’s early stuff – which might be pretty naff these days – Steve Miller Band, The Replacements… A lot of fairly unfashionable bands I’d say! I’m also into stuff that you probably can’t hear on the album. Tom Waits is one of my favourite all time artists, Dr John, stuff like that. And I still listen to a lot of old rock ‘n’ roll – people like Jerry Lee Lewis, Little Richard and Chuck Berry.

What did it feel like to split up Noah and the Whale after eight years?
When we announced the split earlier this year we’d already been on a hiatus since January 2014. It wasn’t like a huge shock. During that time I recorded the solo album. So I’d already adjusted to it. It was more about the fans, who wanted to know what was happening with the band. So for us to be able to move on to other projects, we needed to put a statement out there to draw a line.

We ended up ballsing it up by putting the statement out on April Fools Day, and no one believed it! It turned into a bit of a joke. We had to keep reiterating that we were being serious!

What does the rest of the year hold for you?
I hope to do more gigs of my own stuff. I have a new band so hopefully there will be chance to tour. I’m also involved in other musical projects too, lots of other bands. I’m recording with a lot of other people too. So as well as doing by own stuff I’m a gun for hire!

http://www.fredabbott.com/
Features
Back to top