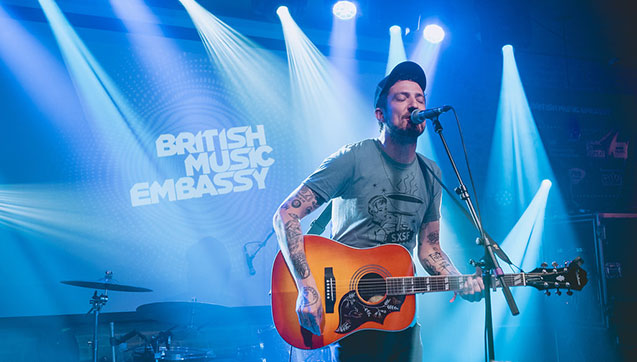 'The days when bands just played and surprised people with no backing are long gone': Frank Turner on SXSW 2018 and what's in store for his upcoming world tour...

Over the last few years Frank Turner has emerged as an unexpected ‘national treasure’ – a far cry from his hardcore-fuelled anarchist beginnings in Million Dead.

His ample back catalogue of folk/punk anthems shouts authenticity and integrity, while his business head is fixed in the DIY scene and devoted to giving others a hand up.

Old-fashioned hard graft has paid dividends, with years of sofa-surfing and hosting free gigs in fans’ houses winning him an army of devotees.

With a new LP in the bag, and a worldwide tour imminent, he took his wares to SXSW to try out the new material last week.

What’s it like, as an artist, to play SXSW?
It entirely depends on what kind of shows you have. For the most part, it's completely chaotic and hectic but a lot of fun. These days I generally have a well-organised schedule of cool shows. There have been years when I've sat around and played to no one though.

People were craning to watch your BBC Radio 2/ PRS for Music set at the British Music Embassy from out in the street because it was so rammed! How was it for you?
It was great, Latitude 30 is a fun room to play, and it was nice that it was busy! I could see that there were people out on the street, somewhere in the distance. The BBC have been very supportive of what I do over the years, I've done the British Music Embassy showcase a few times before, it was nice to feel like one of the family there.

What was the best band you saw during SXSW?
Bones. They're old friends from London, but I hadn't seen them in a while and they totally slayed.

Best food experience of the week?
I was up at Hightower hanging out with Chuck Ragan for an evening, trying out his new hot sauce, and indeed the food in the restaurant. It was great.

Most memorable moment?
Probably doing a BBC radio session with Will Varley on Friday morning. Will was beat, but he still totally broke me down with his version of Statues.

Why is it good for a UK artist to play at the festival?
It's a good way to engage with the American, and indeed international, industry, to spread the word. I think that bands should be careful though, it's entirely possible for your visit there to be a waste of time and money. Million Dead self-funded a trip there in 2004 and we really shouldn't have bothered. You need to have someone putting a good schedule together for you. The days when bands just played and surprised people with no backing are long gone. So yeah, you need some infrastructure around your visit, otherwise it can be a disappointing experience.

Any advice for UK artists thinking about going next year?
See above really, make sure the trip is going to be worthwhile.

What’s it like to play your new album live?
It's a great pleasure, even a relief. I've been working on these songs for a long while now, and it feels good to be able to share them. If people start singing along with the new songs we've released, as they have started to do, well, that's even better.

You’re embarking on a mammoth world tour – with some dates already in the bag, how are you feeling about it?
Great. I've been off the road for a while, I'm excited to get back out there, and to be with my band and crew, we're like family these days.

Anywhere you’re particularly excited to play?
All of it really. The US tour with Lucero and others will be a blast, I'm excited that we're heading back down under again, and UK tours are always a lovely homely experience.

Frank Turner's new album Be More Kind is released on 4 May.

For the full list of upcoming tour dates, see http://frank-turner.com/live-gigs/