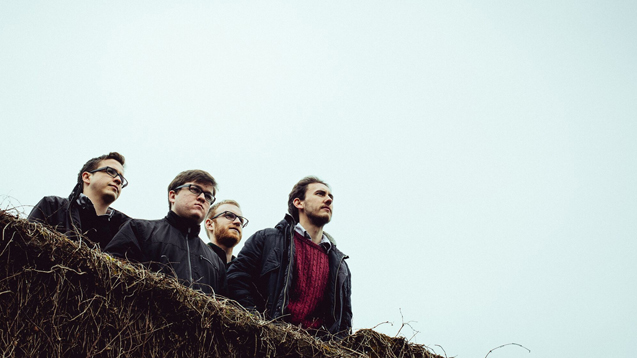 We quiz jazz guitarist Alex Munk on his outfit Flying Machines, discovering more about their debut album and love for the UK jazz scene…

Prog rock, pop and metal are among the musical colours sitting alongside more trad jazz styles enhancing the sonic palette of Flying Machines.

This outfit, formed by guitarist Alex Munk in 2014, feature some of the most innovative young musicians to emerge in recent years from the UK jazz scene - Matt Robinson on piano/keyboards, Conor Chaplin on electric bass and Dave Hamblett on drums. It translates into a deeply contemporary jazz sound captured on their recently released debut album.

Ahead of a huge UK tour, we caught up with Alex to found out how they overcame studio difficulties to make their debut plus new perspectives on the temperature of UK jazz…

There was always music on in the house and my parents had eclectic tastes. In particular, bands such as Dire Straits, Genesis, The Beach Boys, The Police and The Eagles were popular. Singer songwriters such as Elton John, Michael Jackson, Whitney Houston and Sting also. I remember listening to these records in our living room as we all gathered around the vinyl player, it was a bit of a ritual.

I didn’t start writing music until I was at Leeds College of Music for my undergraduate, when it became compulsory. I had always made music spontaneously, whether it was just doodling along with some of my favourite records or improvising, but music college was the first time I sat down and made an concerted effort to fix something on paper.

Once I started doing it though it became hugely important in establishing my direction as a musician. I began to realise that my own compositions related more to my own playing style and influences than the jazz standards I’d been studying.

How did the Flying Machines project come about?

I went to do a master’s degree at The Royal Academy of Music in London after college. This was pivotal for me as I met so many of the musicians that I’m still playing with now, including three out of the four musicians who compromise Flying Machines. We played a huge amount together during that time, we were all writing music too and had lot a common influences.

Also significant was the fact that after music college I spent a lot of time working as a sideman, which was very important in my development.

Flying Machines is your debut LP - what’s the record about?

We recorded the album at a studio called The Chairworks in Castleford. We’d been playing together for a couple of years prior to that, rehearsing, workshopping and crafting the music. I write all of the material but the guys often come up with arrangement or different elements together. Ultimately I felt like we’d got it to a point where we’d established our own sound and we had enough cohesive material for an album.

We wanted to capture the energetic and dynamic feel of our live performances but to utilise the studio to full effect in terms of overdubs and post production techniques to create lots of full and varied textures.

I really enjoyed putting all the overdubs together, it was like the icing on the cake, adding little sparkles here and there to the bedrock of what we’d recorded.

However, the recording process for me was fraught. For one, the studio let us down really badly; I found out a day before the session that they were in the middle of refurbishing and the drum room was basically a building site! It was unbelievable. I nearly called the whole thing off as I was so worried about the acoustics. Luckily we went ahead and we had a great engineer working with us called Tim Thomas who managed to salvage the situation.

I also have to deal with my own anxiety and all the feelings of insecurity that come with this kind of territory, especially when you hear your own parts under the microscope. It was only until about half way through that I managed to relax and enjoy the recording process.

In terms of both composition, by attaching my bottom to a chair! Occasionally I’ll get swept up in a mood or an idea but far more often than not, it comes from setting time aside to come up with something and grind it out - then, usually after a good deal of frustration, ‘darking out’ and staring at a blank page, an idea will start to develop that gradually gets me more and more excited. Then there’s a lovely feeling where you can see it all taking shape and it starts to write itself.

More and more these days I like to take ideas to the band when the structure isn’t fixed and there’s still room to change things round, as they often think of musical solutions and edits that I’d never have thought of.

Inspiration can be fleeting but a big part of it is always seeking out new sounds, artists and bands to listen to. If that doesn’t work out, then I’m more than happy to return to some of my favourite artists such as Pat Metheny, Tigran Hamasyan, Wayne Krantz, Mike Walker, Kurt Rosenwinkel and singer songwriters such as John Mayer, Joni Mitchell and Sting.

Have you any thoughts on the health of UK jazz?

This is a mixed bag. I think the strength of UK players is generally exceptional, there are so many unbelievably talented young players coming through music colleges all around the country. There are lots of fantastic bands doing incredibly innovative things. The down side is that there aren’t enough gigs to go round and so while there are plenty of opportunities for emerging acts, there aren’t quite enough to satisfy demand.

We are about to embark on a 22 date tour all around the UK supported by Arts Council England. That’s taking up most of my attention right now! I'm looking forward to a period of reflection after that and I imagine I'll be getting back into composing some new music for our next release and thinking how we can do it bigger and better. I’ve already started to dabble away with some ideas so there’s some new material for this tour.

I definitely want to push on with this project and see how we can build our fanbase. Unfortunately because it's a bit of a grind trying to make a project like this viable, I see a lot of people throwing in the towel after a release or moving onto a new project. Plugging away and consistently releasing new stuff is key.

Have you any advice to new artists?

If you write and perform the music that you really love, then that should sustain you through 80 percent of the stuff that you have to do in order to try and have a career. It helps if you’re really driven, stubborn and ambitious. Don’t try and do everything, or worry about the latest YouTube phenomenon; just do what speaks to you.