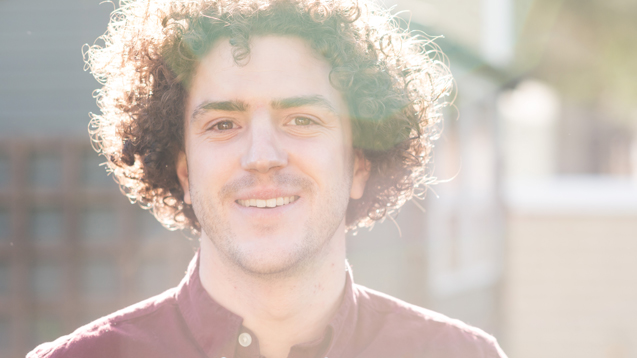 Contemporary classical composer Ewan Campbell lets us in on how he’s used the sounds, sights and maps of London to write music scores…

Well contemporary classical composer Ewan Campbell has endeavoured to find out with his work London, he felt fairly certain, had always been London using the map as inspiration. Commissioned by the Hermes Experiment to create the piece, Ewan incorporated fictional works alongside the tubes while also giving the ensemble space to improvise.

The curious will be able to hear the work performed at the upcoming Nonclassical event in London on 8 June. It heads up the start of a busy summer for Ewan who’ll also be leading the Wilderness Orchestra in a tribute to the late, great David Bowie later in the year. We caught up with him to discover how he managed to (not) get lost in music…

Who or what first inspired you to start composing music?

I played cello, double bass and bass guitar for years, and did lots of music making, but I think it was improvising on the piano that opened me up to the idea that I might be someone who could compose music.

How did you get involved with the Hermes Experiment and the Nonclassical team?

I first performed at a Nonclassical event about seven years ago, and have since had several pieces performed at their concerts by Thomas Gould, Consortium5 and the Mercury Quartet. Quite unrelatedly a friend recommended the Hermes Experiment to me as a group that could integrate fully composed and semi-improvised performing. After I had been in touch about my map-score way of composing they commissioned me to write a piece about London.

London, he felt fairly certain, had always been London takes its inspiration from London’s Tube map - could you explain about ideas behind the piece and the creative process of its composition?

My first map-scores were for piano about a decade ago when I was still studying. I wanted to write pieces in which the performer could choose their own path around a two-dimensional map of musical fragments. Recently I rediscovered this interest, and explored how I might compose directly onto existing maps, and how those cartographical structures can shape the music. In London… I have replaced the stations with musical fragments, and the performers navigate between them, following the tube lines. My hope is that the piece is as stimulating to look at as it is to hear.

Each of the four performers - voice, clarinet, harp and bass - have their own version of the tube map with music specific to their instrument. They don’t attempt to coordinate their navigation, but choose their paths on the fly in response to what they hear from the other musicians. In many ways the score is a guide to improvisation, more than a finished piece of music. London is such a multifaceted city, that to write a singular musical response to it seemed inappropriate. Instead any two performances of this piece will be totally different in terms of the overall structure, though made from the same constituent parts.

To some extent the tube lines have a musical identity: the voice sings an extract from Virginia Woolf’s Mrs Dalloway along the Central line; the clarinet has a slow melody along the Piccadilly line; the harp has a series of rich chords on the Jubilee line, and the instruments all become excited with hectic rhythms on the Circle line! I didn’t want the music to get too dense, so I included some silences - though, clearly, these never normally happen on the tube! 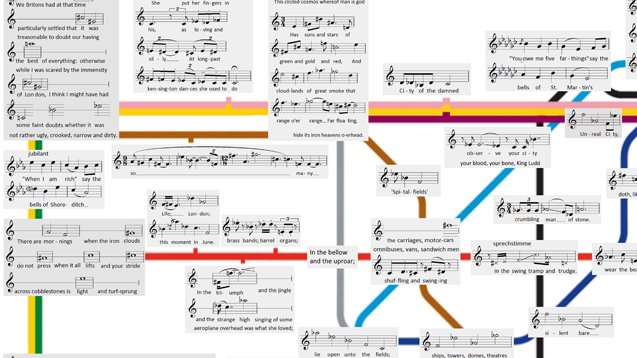 What was the biggest challenge with the piece?

Normally a composer can predict the order of events in their music, writing one idea to follow another. In London… I have tried to compose a myriad of musical continuities, so that all the interchanges and connections make musical sense. I suppose it is like composing a host of different pieces all at once, and not knowing which ones will be performed.

Which texts helped shape the work?

I tried to cast my net as wide as possible for the texts, and they range from an entry in Samuel Pepys’ 1666 diary about the Great Fire of London, to extracts from Will Hatchet’s contemporary poetry, via the prose of Dickens, Conrad and Woolf. I used four lines from Wordsworth’s Upon Westminster Bridge, which I irreverently made to work backwards as well as forwards. I purposefully included out-dated perspectives such as George Gissing’s horrifying description of East London from a train. The title is taken from George Orwell’s 1984, when Winston is trying to recall whether Airstrip One used to be England or Britain.

Which are your favourite areas of London touched by the work?


Ha! London Bridge is one of my favourite haunts, and this landmark features in T.S Elliot’s Wasteland, which I set to music at this station.

Then there is D. H Lawrence’s poem from 1916 Embankment at Night, before the war which tells of ‘the outcasts’ sleeping under the bridge at Charing Cross. This was still true when I first lived in London and crossed the bridge daily.

I had to restrict myself to zone one; otherwise I fear the piece would be far too long and become very boring!

What other projects have been keeping you busy? Have you any more plans to work in this kind of way?

I’m definitely looking to create more map-scores. I want to develop a piece based on the Hawaii archipelago for string quartet, and am writing a short piece for solo voice for Heloise Werner that uses topographical contours for the lines of a musical stave.

Have you got any advice for aspiring composers?

Become friends with performers, and be nice to them; you need them more than they need you!

What else does the future have in store?

I’m currently arranging the music of David Bowie for the orchestra I conduct at the Wilderness Festival, and planning a tour of my orchestral arrangements of Radiohead in Croatia. I’ve also just been commissioned to write a new piece for the London Symphony Orchestra, but this won’t be premiered until their 2017/18 season...