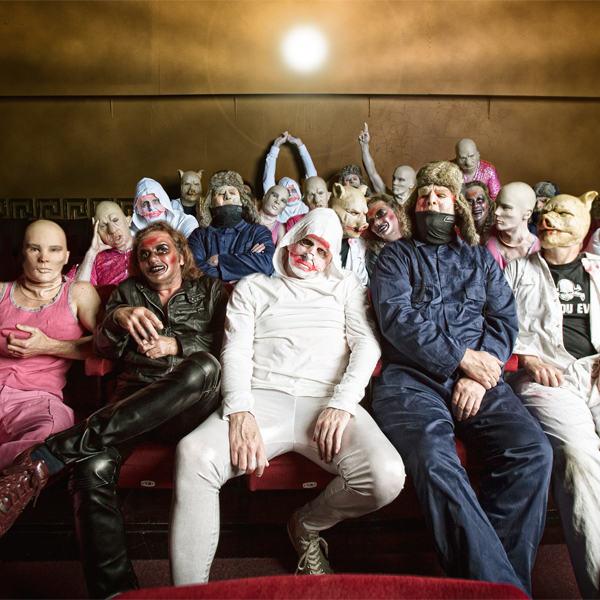 Take four bassists, a singing drummer, a load of rubber masks and love for unhinged psyche metal and what have you got?

The answer is Preston outfit Evil Blizzard, a band blending up terror and sludge rock thrills with an out there fetish for the likes of Killing Joke and PIL. The results, debut LP The Dangers Of Evil Blizzard and latest follow up Everybody Come To Church, are short, extremely sharp jabs in the eye for mainstream rock, as fuelled by rage as much a love for the weird.

The band was formed by chance when myself and Prowler played together in another act. The guitarist couldn’t make the gig so I suggested we do it anyway as a two piece. I thought of the name Evil Blizzard after noticing the Ozzy debut album at Prowler’s house and thought Evil sounded good before it. The rest is history. Before that the two of us had been in a band called Brown Ring with Kav, who joined up again with us at a later date in Blizzard. There was no master plan - we just played live and people seemed to like it, foolishly.

You’ve four bass players, wear masks and have a singing drummer - what was the aim when starting out?

Originally it was only a two piece and our first gig was us on stage turned up full and wearing parkas fastened up to the face! It wasn’t an intention to wear masks but after Kav joined he said he was going to due to his fascination with them. We all followed suit. The fact we have four bassists was by chance after people joined for a guest slot and forgot to leave. We have had nine bass players at some gigs. It all gets very silly and chaotic but that’s part of the fun.

We’re all male models and never get taken serious as a musical force, so by wearing the masks it makes people feel less jealous of our dazzling looks. That and we can usually act out things on stage we normally would get arrested for if not in an alter ego! We like to think the band as a sort of Victorian freak show and the masks give us the change to act this out.

How does the reality of the line-up work when playing/recording?

When we record we tend to keep it as live as possible. On the first album we just plugged in and recorded what came from the speakers. You have a restriction with just bass but it makes you more inventive. Live we set up as Stomper being the only true bass player and the other three fit around him. Filthy and Kav pan far right and left and Prowler adding solos and wah wah. On reflection this is basically what we do in the studio. We don’t get too hung up on the recordings and know if it feels right it is right.

You’re from Preston - what influence has being from the town had on your sound?

Preston has always been overshadowed by our large musical neighbours but - the only thing we can say is we are influenced by the sound of Butter Pies being baked or trying to imitate the crashing of the cotton mills at dawn. Preston has been notorious for the music industry ignoring it even though John Inman was from our town and I’m sure he had an album out at one time. The revolution of music has begun and it’s all about the North West.

Are there any particular artists or art that help fuel your music making?

We have grown up listening to metal, punk, goth, prog, funk and electronica. Blend these together and you get Evil Blizzard. Essentially the main influences range from Killing Joke, Hawkwind, Sabbath to PIL and Kraftwerk. We like to take what we can, then run wild with it. I think the end result is like no other.

The new album is produced by Richard McNamara of Embrace and was recorded in a day - What’s the record about? And how did you find working with Richard?

The first album was recorded in about eight hours and the second one was probably about 20 altogether minus pub breaks. We met Richard after a gig in Manchester and he was keen to bring the live sound of the band onto record. He was like our Mutt Lange! He runs a fantastic studio called Magnetic North in Halifax and really showed us what to do. If he thought we were going up our own too much he told us, but really he was happy to let us play. Having someone who has had hit singles and albums he really knows what sells and wanted to give us more appeal to the UK’s housewives.

He knows his stuff having recorded himself with Youth and was keen to use as many pedals as possible. The sound he has given us is huge and has managed to make us sound both live and also commercial. If that’s not a dirty word!

How have you developed as music makers since your debut?

I feel the album is a giant step for Blizzardkind and the songs on the new album are all more interesting. There are more hooks and dare I say single type tunes on it. When we recorded our debut we hadn’t even rehearsed together and Kav didn’t really know half of the songs. Saying that, the first album was great and people do seem to love it - songs like Clones, Red Box and Slimy Creatures, but listening to the new record I hear a much more together outfit. Hopefully on our next album we can change it again and record two long songs for the more prog/techno fan. I’d like to think we have progressed as I am sure on this album there are some songs with more than three notes in them.

Are there any other new bands getting you excited?

We can point people towards are The Superfast Girlie Show. Amazing two bass noise band. If you think Motorhead meets Primus with a bit of Ken Dodd thrown in you can’t go wrong. (Well they are Scousers!) Another great band is Bad Guys who seriously rock. We are playing with them at the Barfly, Camden on 28 November and this will be a monster of a night.

Have you got any words of advice for new metal/psyche/riff acts?

Whatever you do, do not listen to any advice from Evil Blizzard.

Catch Evil Blizzard on tour below.

Watch the video for Are You Evil below...