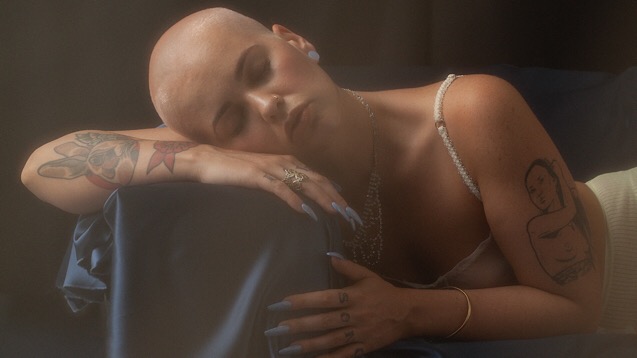 'I often sing the things I might not have the courage to say otherwise': Etta Bond on her soulful, late-night R&B confessionals...

'I’m not actually very good at talking about how I feel... I often sing the things I might not have the courage to say otherwise,' says singer-songwriter Etta Bond.

Dubbed the ‘Skinhead Soul Princess’ and named as one of The Guardian's rising stars to watch in 2017, the soulful Londoner is known for her straight-talking lyrics and self-empowering message.

Earlier this year, she unveiled #SurfaceChallenge, an open call to her fans to upload a video of themselves being expressive to an instrumental of her track Surface.

Explaining how it was about 'encouraging people to open up,' she tells M: 'We are conditioned into believing it’s better that we hide our feelings from the world, that feelings are a weakness. I think it’s important to share how we feel.'

Latest release Let Me Hit It is a perfect example of Bond's upfront and direct sonic nature. A sultry, confessional slab of late-night R&B, her voice is ever at the forefront, creating a feeling of intimacy amongst the sparse beats as she sings about her sexual frustration: 'How many times have you pictured me naked?/ 'Cause I call you a friend but I know that I'm fakin'/ Swear sometimes I look at you/ Things I wanna do, friends just don't do'.

With a string of EPs and singles under her belt and previous collaborations with artists including Plan B, Wretch 32 and Labrinth, it's full steam ahead for the singer, who's just announced a UK tour in December.

Check out the dates below and dig into our chat...


What first got you into making music?

It was a natural thing. I always liked music and writing. Keeping a diary has been a big part of my journey. I started my first diary aged seven and recorded my first song at 14.

How has your songwriting evolved since then?

It’s evolved as I have. But the way I write is still very much the same as it’s been since I wrote my first songs and kept my first diaries.

What or who has influenced you most along the way?

What’s the thinking behind #SurfaceChallenge?

It was just about encouraging people to open up. We are conditioned into believing it’s better that we hide our feelings from the world, that feelings are a weakness. I think it’s important to share how we feel. I was really happy to be able to get people to do that.

I’m not actually very good at talking about how I feel... I might seem like I am. But I’m actually pretty shit. Music has helped me with that. I often sing the things I might not have the courage to say otherwise. I think it’s important for everybody to find a way of expressing themselves. And it doesn’t always have to be for the gram. Do it for yourself.

What response have you had from artists and the wider industry towards it?

The response has been great. Mahalia and Sinead killed it. The challenge brought us closer together for sure.

I’ve got another video on the way which I’m excited about to say the least. I’ve got my first ever UK tour in December so I’m getting ready for that. I’ve got a lot of music to release. The age of sitting on music has passed.

Ruby Francis - All Of the Time.