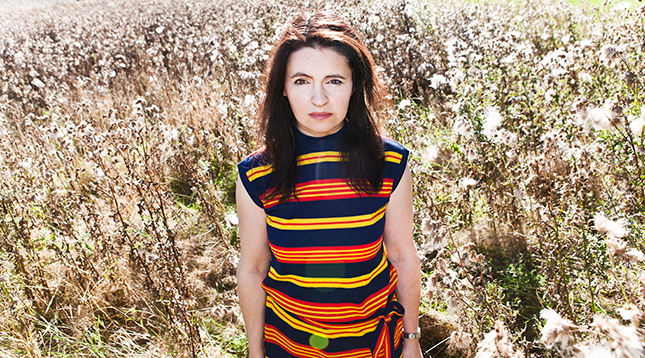 The ex-Delgados songwriter and Chemikal Underground co-founder lets us in on the making of her new solo LP...

Emma Pollock is a musical shapeshifter 20 years in the making, whose restless creativity always ensures she plunges right in at the deep end.

As a singer, songwriter, multi-instrumentalist, label boss and founding member of the much-missed indie quartet The Delgados, she’s spread her wings across a vast number of notable projects, always bringing with her a canny ear for melody.

Operating out of the East End of Glasgow since 1995, the label, and its related recording studio Chem19 in Blantyre, has helped define the city’s sound and encourage a whole generation of DIY enthusiasts to set up their own equivalents.

While the passing of Emma’s band The Delgados in 2005 marked a sad end for their distinct blend of gentle orchestral pop, her first solo record, The Law of Large Numbers, emerged soon after to soothe away the blues.

Since then, Emma’s been increasingly involved in running the studio, developing the Fruit Tree Foundation music project alongside Idlewild’s Rod Jones and playing a central role in The Burns Unit (who performed on Later…With Jools Holland).

She’s now back with her second solo LP In Search of Harperfield, a rich tapestry of candid emotion and gentle melody that sees the songwriter explore new instrumental and harmonic possibilities.

How did In Search of Harperfield start life?
The first track recorded was Dark Skies, which was actually commissioned originally for an Arches theatre production in Glasgow called Whatever Gets You Through the Night, written by Cora Bissett. The production was multi-formatted - with music, short drama pieces, poetry and dance all woven together to tell the story of what occupies those of us still awake at 4am. I imagined myself in Galloway Forest Park, not far from Castle Douglas where I grew up from the age of 10, staring up at the stars in the quiet of the forest. Galloway Forest Park has been awarded Dark Skies status as it is one of the only places in Europe far enough away from light pollution to get an uncompromised view of the night sky.

The record is very autobiographical in nature – did you set out to do this or did it come together more organically?
It was a much more organic process, written over the period of four years. The songs aren’t all drawn from direct personal experience though - some are exploration of character (Vacant Stare), some play upon those timeless topics of betrayal and retribution (Clemency, Alabaster), some are playful reminiscing of childhood (I recall a childhood scrap in Parks and Recreation) - but some also drawn directly from my mother’s worsening health over the past few years (Intermission, Cannot Keep A Secret). She passed away in February of last year.

Where did you write it?
Mostly at home. On guitar, and more bizarrely for me, piano - as I can’t really play it so I just search until I find chords and lines that I like or have heard in my head. It’s liberating to write on an instrument you can’t play as you become more reliant on ear and don’t fall into routine or habit as you might on your first instrument.

Who was involved in the project?
My husband Paul Savage produced the album and I have to say did a wonderful job. We both shaped the record from its early stages as songs like Dark Skies (strings arranged by composer Malcolm Lindsay) took on a lush orchestral sound, which went on to influence the presentation of the whole album. I hadn’t really used strings since The Delgados days so this was a hark back to that big expansive sound that we took on back with albums like The Great Eastern and Hate.

Paul has been producing now for the last 10 years, a natural development from engineering, and he’s really wonderful to work with in this context. He’ll always strive to present a song in a unique and individual way - to make it vital and justify its inclusion in the record. Some of the songs started as just bare bones song and we would work together on various ideas until we hit upon something interesting. For example, Alabaster started out on piano and migrated to become a surreal world of off-kilter beats and synth. I love what we did with that song.

There were other musicians periodically involved too that I’ve been working with for a long time - my bass and piano player Graeme Smillie, The Cairn String Quartet, Davey McAulay (a Chem19 engineer and film composer) and Michael John McCarthy (formerly of Zoey Van Goey). RM Hubbert and I also wrote a new song together for the record - Monster in the Pack.

How does it differ from your first solo record?
It’s definitely a studio record rather than a band record. There was no restriction placed on which instruments could be pulled in, as long as they were available to us in some form. I didn’t want a traditional guitar band sound - I wanted something broader this time, something that could be intimate and otherworldly such as Alabaster/Clemency or as lush and ambitious as Intermission. The more traditional band songs of Don’t Make Me Wait and to some extent Cannot Keep A Secret are still very much part of what I do though - they’re great fun to play live.

How have your songwriting processes changed since The Delgados?
I need to take more responsibility for shaping the end result now, so writing the song in its initial form is just the start as I know that more of a challenge is to follow once in the studio. There are so many ways to present a song - and each option will have a different impact on how the song is perceived.

With Delgados I was mainly a songwriter but took less to do with the production - Paul and Stewart were more involved in that. So in some ways not much has changed as Paul and I are still here but our roles are now exaggerated.

Was it hard to make the transition from band member to soloist?
It was very hard yes. I think it’s taken a long time to gain the confidence to step outside of a fixed set of people and look at doing something more innovative and surprising. I guess that’s the beauty of being a solo artist though, the fact that the freedom is there to work with whatever/whomever you fancy as long as it feels like it fits. The first solo record was written in the aftermath of the band splitting up so in some ways I still felt like I was in a band and didn’t embrace the potential or freedom of the situation until Album 2 - The Law of Large Numbers.

You co-founded Chemikal Underground back in the mid-nineties. How has the label changed over the years do you think?
Well we’ve seen huge changes in the way that people engage with music. I’d say that’s the main thing. When the label started in 1995 we were getting involved with the industry at a time when CD sales were still buoyant - the internet hadn’t impacted yet and investment in artists was still substantial as record sales income was healthy. That peaked in 2000 and things started to decline from then on. We’ve been witnessing a decline now for the vast majority of our existence which makes it all the more remarkable that we’re still here.

The ebb and flow of different formats has been accelerating over recent years too - we’ve seen CD sales peak, almost disappear, mp3 downloads come in, peak and decline and be completely overshadowed by streaming, now vinyl, after disappearing, has surprised everyone by returning with a vengeance, which I’m so heartened by.

Technology may offer us the undoubted ease of streaming and never buying music again, but a good portion of us will still choose to go out and take ownership of a tangible piece of vinyl with beautiful artwork and enjoy the ritual of playing it and listening to the whole thing in the intended running order.

Are you still as involved?
Not as much as I once was as I actually started getting more involved in our recording studio five years ago - Chem19 in Blantyre just outside Glasgow. The studio has been going since 1997, so almost as long as Chemikal Underground. I still do a few jobs for the label though as we’re very short staffed now due to the downturn. At this point however I’ve swapped hats and I’m enjoying being the artist again…!

Is there a band you really wish you’d signed to the label?
We did sign Interpol for an EP (fukd ID 3) back in 2000 which I’m told helped influence Matador US’ decision to sign them. I absolutely adored that EP and their subsequent albums. I do wish we had been able to put out the albums in the UK at least, but it had been difficult to get people to take notice of the EP and they were based in the US so it didn’t make sense to continue working with them at the time.

What does 2016 hold for you?
With any luck a good deal of performing live, with my band as often as possible as I love playing with them. I think I’ll be playing some dates in Spain and Germany later in the year as well some more UK dates. We’re still working on all of that just now. It will be lovely to get out playing again.

In Search of Harperfield is out on 29 January through Chemikal Underground: http://shop.chemikal.co.uk/acatalog/CHEM211.html
Features
Back to top