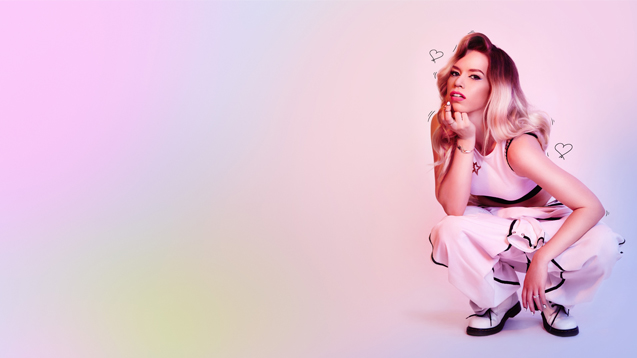 If you’re looking for the formidable pop force to take on Ariana Grande or Lady Gaga, then end your search now.

She’s arrived in the form of Elle Exxe, a futuristic Scottish star dealing in striking neon pop, perfect for our attention-less times.

Her marriage of slick R&B, throat grabbing chart hooks and acute lyrical invention have found her fans across the board from the Quietus to the Gay Times. Elle’s songs have been accompanied by an ace live show that has done damage from intimate beginnings at 229, London, to London’s KOKO as part of Club NME, the Great Escape Festival in Brighton as well as global events courtesy of backing from the PRS for Music Foundation.

Now with debut album, Love Fuelled Hate, she’s on the brink of real global stardom, aspirations confirmed by her nomination for the inaugural Unsigned Music Awards. We meet a star on the up and up…

When I was really little I used to make noise out of anything I could get my hands on. I once tried to compose some sort of cat chasing a mouse song on the piano (probably aged five or six). This involved bashing my palms on every single key; I shouted to my dad and asked him what he thought: “Rubbish” he said. “I think we need to get you lessons”. So it started from there.

Who or what inspired you to start writing your own songs and works?

I really can't pinpoint my first inspiration but I've always taken influence from artists and bands that speak honestly.

I remember my brother telling me Freddie Mercury was singing about his illness in The Show Must Go On and that affected me deeply. People like P!nk and Eminem had a massive impact on me when I was young and bands like Linkin Park and Muse. They all made me want to write music that had guts and might help someone going through difficult times.

It was a combination of things - I got my music synced to a Google Advert, charted in the Music Week Top 10 and got booked to play a headline show at Koko in London all in one week. It all stemmed from a trip I took to LA a year earlier. I didn't know anyone or have anything so I emailed a load of producer-writers and got invited to their studios. I wrote some songs including one called Lost in L.A. - this got me all of the above as well as my management.

Love Fuelled Hate is your debut album - could you explain about the thinking behind it?

It was important to me to make an album that felt like one solid piece of art. Rather than a compilation of great songs, I wanted it to feel like a continual composition that had to be listened to from start to finish in one sitting. I feel that nobody makes time to listen to a whole album these days and I wanted to make something that encouraged people to do that. Most of all, I wanted to make a record that I could feel proud of for the rest of my life. It's an emotive concept album about the destruction of love to hate. Each song is connected to the next both lyrically and musically.

How do you write your songs? ?

I like to start by creating a beat and a bass line, then I riff or rap over the top until it feels right and I know what I want to say and sing. I think the beat and the bass are the best way into the creative process. As soon as you're in a vibe you're enjoying, the rest flows.

Which new artists are you currently loving?

You have something of an international following – how have you managed to make an impact with audiences overseas?

It's the online era. It's crazy! I went out and played four shows at Canadian Music Week and I've just been out and done four shows at MONDO in New York. I'm heading to South Korea for four shows in a couple of days (I think four must be the lucky number?!). I work hard at making my image and visuals as strong as my music so even if people don't know my name when I'm on festival line-ups my photos catch people’s eyes and intrigue them. The kind of festivals I've been playing are there to promote new and emerging acts, so I'm not competing with Beyonce or Coldplay – I've got a captive audience of new music fans. The great thing about these international showcase festivals is that people from all over the world go to them, so when I played Canada I got booked for New York. I hope when I play Korea I'll get booked for Japan. I think it's also important to sculpt each show for each audience.

In terms of standing out from the crowd, what do emerging acts need to do?

Be you and give a shit. Literally. Even if you decide that your whole “thing” is to look like you don't give a shit, you need to give a shit about not giving a shit. Because when you care, you'll take the time to think about every element of what you do and make it quality and give it importance. And when you're “doing you” that's unique because You. Are. Unique. And when you make it quality and important they'll struggle to ignore you.

My musical future is looking like a wild and never ending house party with only good people. I'm sure there will be many mind-blowing highs and many tear-stained lows, but my only true goal is to make everything I do better than the last. I hope to continue playing internationally but on bigger stages, with better lights. I hope to do many collaborations with friends and with my idols. But mostly I hope to produce music of some value and be able to encourage a community of people to give a shit about themselves but more importantly to give a shit about each other for many, many years to come.

Love Fuelled Hate is out now